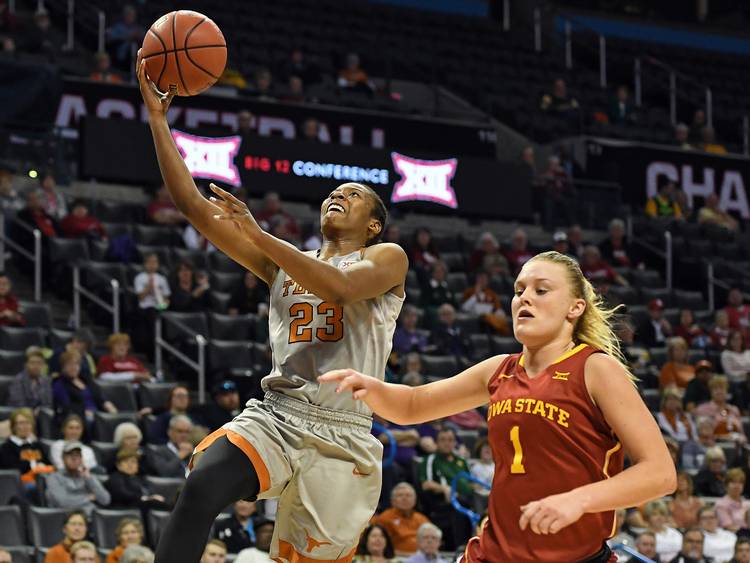 OKLAHOMA CITY — Ariel Atkins is driven to add a few more chapters to her legacy at Texas before her college career comes to an end.

In one of her best all-around games wearing burnt orange, the senior guard posted an amazing stat line to help Texas earn an 81-69 victory over Iowa State on Saturday in a Big 12 tournament quarterfinal. She matched her season high with 25 points while hitting 10 of 15 from the floor, including 5 of 6 behind the three-point line. She added four rebounds, four assists, three steals, two blocked shots and did not commit a turnover.

With her at the wheel, Texas (25-5) advanced to the tournament semifinals and will play at 4:30 p.m. Sunday against West Virginia. WVU defeated Oklahoma State 69-60 late Saturday.

Atkins had plenty of help as the Longhorns swept the season series against Iowa State 3-0. South Carolina transfer Jatarie White combined 18 points with 12 rebounds and Brooke McCarty chipped in 12 points while handing out a game-high seven assists.

Players and coaches from both teams, though, gave Atkins rave reviews for a variety of reasons.

“I think she’s an All-American and she has had that kind of year and she is playing the way she wants to play,” Karen Aston said.

“I really enjoyed hugging her afterwards and wishing her good luck for the rest of her life so we don’t have to see her again,” Fennelly joked.

Iowa State (14-17) had remarkable performances by guards Emily Durr and Bridget Carleton, who each scored 25 points. But while they kept the game respectable, Texas countered with a deeper bench and contributions from many sources.

Durr, who played her last collegiate game, scored 13 of her points in the third quarter to give the Cyclones hope. But when Texas countered with an 8-0 scoring run to open the fourth, including a three-pointer by Atkins from the right corner, the Cyclones would get no closer.

“Ariel is a great competitor and a lot of people don’t see how hard she runs the floor,” Durr said. “She does all the little things that don’t get on the stat sheet — going for loose balls, tipping the ball to a teammate. … She doesn’t get the attention she deserves.”

Atkins and White combined for 22 points in the first half to help the Longhorns earn a 42-27 lead at the break. Texas would earn big advantages in rebounds (38-25), points in the paint (34-20) and bench points (17-4). The Horns also were hot behind the arc, connecting on 9 of 16 three-point attempts.

Atkins and McCarty said they feel a sense of urgency because they are playing their final games at Texas. But Atkins downplays that component.

“There is a different sense of urgency being a senior, but I don’t want  to say I didn’t have urgency my first three years here because because I came to UT with a purpose,” she said.

West Virginia 69, Oklahoma State 60: In the final quarterfinal of the day, the sixth-seeded Mountaineers defeated No. 3 seed OSU behind Naomi Davenport’s 21 points. Katrina Pardee, a graduate of Vista Ridge, tallied 15 points and grabbed eight boards. West Virginia (21-10) was the No. 6 seed last year, too, and won three straight games to win the tournament. OSU (20-10) was led by All-Big 12 post Kaylee Jensen, who finished with 20 points and 9 rebounds.

Behind Blair Henley and a lot of offense, Texas completes a Saturday sweep of Northwestern