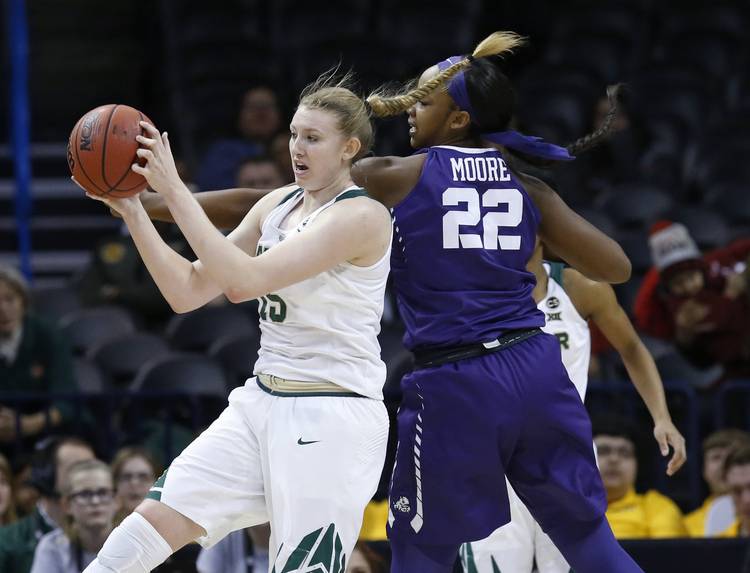 It has taken her two games to prove she’s not just a stopgap player.

While Wallace’s college career is likely over following a torn ACL suffered last week, Morris represents the future of the Lady Bears.

In Baylor’s 94-48 semifinal victory over TCU Sunday at Chesapeake Arena to advance to Monday’s championship game, the 5-foot-6 freshman scored a season-high 18 points and led the team to its 27th straight win.

Morris said her aggressive style is a product of rough Baylor practices.

“I’m playing against a senior (Wallace) everyday in practice who pushes me,” she said. “So I give all the credit to Kristy. She prepared me in practice to be better every day.”

The Lady Bears (30-1) seek to win their eighth conference tournament championship in nine years when the take the floor Monday night.

Kim Mulkey said she’s not surprised Morris has had quick success, adding she would have voted her All-Big 12 freshman of the year.

“I didn’t have any questions, honestly,” Mulkey said. “The only thing Alexis doesn’t have that is minutes played and game experience. She has the talent. She brings different things to the table than Kristy does.”

This marked Baylor’s 25th straight victory over TCU, a streak that began in 1990.

While Morris steered the offense, the Lady Bears once again received big performances from their frontcourt tandem of 6-7 junior Kalani Brown and 6-4 Lauren Cox. Brown scored 28 points, Cox had 19 and both finished with 11 boards.

Baylor had a staggering 49-19 rebounding edge.

TCU, which shot 52 percent from the field and 50 percent behind the three-point line in Saturday’s 90-83 victory over Oklahoma, lost its touch on Sunday. The Frogs missed their first five three-pointers before Toree Thompson nailed one with 5:20 left in the second quarter.

Wearing jeans and a green sweatshirt, injured Baylor senior guard Kristy Wallace still served as team captain and represented the Lady Bears at midcourt with officials before the game. In her place on the court, Moore also contributed

Baylor is 39-13 in the Big 12 tournament. This season the Lady Bears won the regular-season championship for the eighth straight time.

As for TCU, the Frogs’ 19 victories tied their highest total of wins since they joined the league. In a breakthrough season, TCU was ranked in the Associated Press Top 25 three weeks, their seven-game winning streak in January was their longest in seven years, and they earned a victory over No. 7 Texas.

Behind Blair Henley and a lot of offense, Texas completes a Saturday sweep of Northwestern