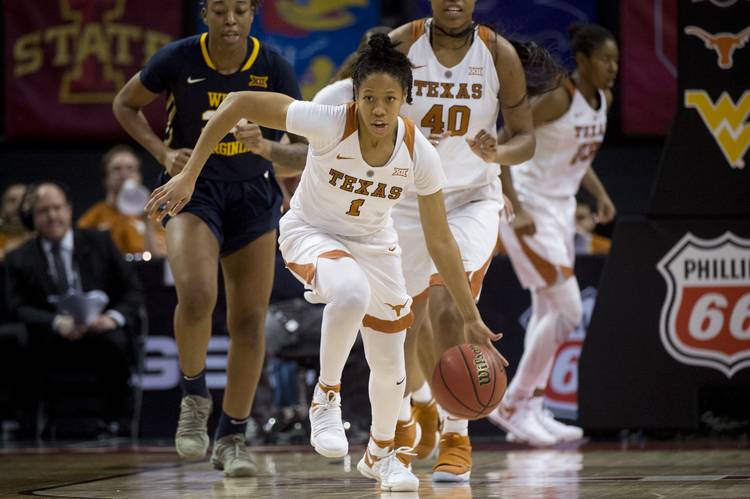 OKLAHOMA CITY, Okla — Alecia Sutton hit a three-pointer with 30 seconds left in the first quarter and drilled another one at the buzzer.

Those consecutive buckets by the backup point guard kick-started Texas en route to a 68-55 victory over West Virginia in a Big 12 tournament semifinal Sunday night at Chesapeake Arena.

The Longhorns (26-5) set up a rematch with Baylor on Monday for in the tournament championship game. The Game is scheduled for 8 p.m. and will be televised on Fox Sports 1.

Texas won for the 11th time in 12 games and is playing its best basketball of the season. In recent weeks, Sutton has made a habit of hitting shots at the buzzer to give her team a lift.

“I just know that it’s my role off the bench to bring energy to this team, whether it’s with offense or defense and I take that very seriously,” said Sutton, who led the team with 11 points.

As for Sutton, she has played well down the stretch of the season, and always seems to have the ball in her hands at the end of quarter, Karen Aston said.

“We had a conversation in the locker room before the game about how we need to finish quarters,” Aston said.

“I will say this much. For whatever reason, Sug ends up with the ball in late-quarter situations. She had dramatically improved from the first part of the season where she looked like a deer in the headlights when she had the ball. Now I think she is very confident with either getting us in a certain play that we’re trying to run or taking a big shot.”

Aston, though, did not need to look at the stat sheet to see the game’s most lopsided component. Texas earned a 25-0 edge in bench points.

“The bench was the difference in the game,” she said.

Aston was generous to role players such as Rellah Boothe (5 points, 3 rebounds) and Jordan Hosey (4 points). Knowing that Baylor is next, no Longhorn played more than 26 minutes Sunday.

West Virginia (21-11) will have to wait to see whether it gains an NCAA Tournament spot in two weeks.

“I thought we came out with energy,” WVU coach Mike Carey said. “Give Texas credit. They kept driving us. We took too many threes.”

The Mountaineers (21-11) were just 2-for-23 behind the three-point line. Katrina Pardee, a Vista Ridge graduate, scored 10 points for the Mountaineers.

Baylor punched its ticket to the finals with a 94-48 victory over TCU in Saturday’s first semifinal. The Lady Bears defeated Texas this season 81-56 in Waco and 93-87 in Austin.

Texas 81, Iowa State 69, late: Ariel Atkins matched her season-high of 25 points while hitting 10-of-15 from the floor, including 5-of-6 behind the three-point line to lift Texas in a lopsided win in a Big 12 tournament quarterfinal on Saturday.

Jatarie White combined 18 points with 12 rebounds and Brooke McCarty chipped in 12 points while handing out a game-high seven assists.

Iowa State (14-17) had strong performances by guards Emily Durr and Bridget Carleton, who each scored 25 points. But while they kept the game respectable, Texas countered with a deeper bench and contributions from many sources.