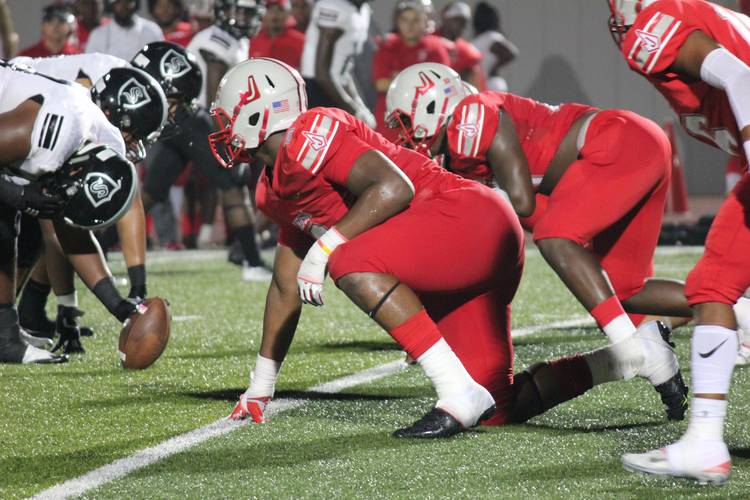 Converse Judson defensive lineman DeMarvin Leal is the No. 3-ranked player on the Fabulous 55. (Mike Craven)

Texas hopes to sign a full class if numbers allow, which would require more attrition between now and the start of the 2019 season. The Longhorns signed a big class in 2018 and won’t crack the 25-man limit in 2019 because of it.

Here are a dozen prospects the Longhorns hope to sign either in the early signing period or on national signing day:

Wilson is a prolific prep wide receiver. In two years, he has 151 receptions for 2,472 yards and 38 touchdowns. He’s also contributed as a running back and as a cornerback. He visited Texas for junior day and is a former high school teammate of current UT tight end Cade Brewer. The Austin local is a top priority for Texas on the offensive side of the ball. Playmakers with the ability and proximity to campus of Wilson are rare and Herman and offensive coordinator can’t lose him to an out-of-state power. The biggest competition is likely Ohio State since Wilson is a native of Columbus. Wilson released his top eight schools on Sunday.

The biggest target for Texas along the defensive line is undoubtedly the 4-star defensive lineman from Judson. Leal is the perfect defensive end in the odd-man front preferred by defensive coordinator Todd Orlando. Leal would play 3-technique defensive tackle in most traditional defenses. He visited Texas for junior day and noted the proximity of UT as an advantage for the Longhorns. Texas signed the best player out of San Antonio in 2018 and 2017 in Caden Sterns and Derek Kerstetter, respectively. Leal would make it three years in a row for the Longhorns to land the best player in the Alamo City.

Texas signed Conroe Oak Ridge teammate Joseph Ossai in 2018 and has led for Johnson for nearly a year. It’d be a surprise if the 4-star offensive tackle chose any school outside of Texas. The Longhorns signed five offensive linemen in the 2018 class and can afford to cherry-pick in 2019 because building depth won’t be as much of an issue if the 2018 class pans out. Johnson would be considered a better prep recruit than any offensive lineman Texas signed in 2018 and would represent another win in the Houston area. Johnson is the second-best offensive tackle in the state, behind only Kenyon Green of Humble Atascocita.

Top schools: Like Johnson, Texas signed a teammate of Banks in the 2018 class when 4-star tight end Malcolm Epps inked with UT during the early signing period. Banks was considered a Texas lock early in his recruitment process, specifically after a recent visit to Austin for a junior day. LSU, however, is squarely in the mix and hosted Banks for its own junior day over the weekend. The state’s top-rated cornerback has family who lives in Louisiana and that could give the Tigers an edge. The Longhorns will rely on a long-standing relationship with Banks and the presence of Epps.

Whittington is a playmaker who could project as a slot receiver, running back or safety at the college level. Texas likes him as a do-it-all offensive weapon who would line up in the slot or be used in motion on jet-sweeps and quick runs to the outside. The Cuero product was a one-time Texas lean, but Texas A&M and UCLA are closing the gap. Whittington is set to announce his decision on March 10 and the Longhorns don’t feel as good about their chances as they did a month ago. Whittington is the type of player to set a tone for a recruiting class and he’s close with 2018 Texas signees Caden Sterns and Joshua Moore.

Higgins is another Austin-based receiver who became a recruiting priority in the 2019 class. He and Wilson have built a close relationship, even meeting with Texas quarterback commit Roschon Johnson to throw footballs when Johnson took an unofficial visit to Austin. Higgins is a big-bodied receiver who can become an instant threat as a third-down weapon or in the red zone. He’s too strong for most cornerbacks and has enough speed to beat safeties with vertical routes. Texas is the favorite, but Stanford is making a real push.

Texas wants to utilize the tight end position to create mismatches in the passing and running game. The Longhorns are searching for versatile prospects who can block and catch. Wiley isn’t a flashy prospect, but he’s a fluid linebacker with toughness. He excels as a run blocker and is a sure-handed receiver. He caught 25 passes for 323 yards and four touchdowns as a junior. Wiley and Brock tight end Baylor Cupp are the only in-state tight ends to currently hold a Texas offer.

Tom Herman is yet to sign a true center prospect since taking over at Texas. He’d like that to change in 2019 with the addition of Bragg, the No. 2-ranked center in the country, per the 247Sports composite. Bragg is a long-time fan of Texas and visited the Longhorns numerous times in Herman’s first year at the helm. Texas hopes to sign at least two tackles and an interior lineman on top of a center in the 2019 class. Bragg is the unquestioned top target at center and there doesn’t appear to be a current Plan B.

Wilkins left impressed with Texas after a recent visit for a junior day. The battle likely comes down to Arkansas and Texas. Top talent from Arkansas rarely escapes the Razorbacks, but a close relationship with new offensive line coach Herb Hand might be the key to Texas reeling in the long-armed tackle. Two of the five offensive linemen Texas signed in 2018 played prep football outside of Texas. Wilkins comes with the ideal build, quick feet and pedigree. Proximity to home is the lone thing currently working against the Longhorns.

After a great talk with @CoachTomHerman I’m blessed and honored to announce I have received an offer from The University of Texas #fUTure19 #Hookem pic.twitter.com/baQtPU0FMe

A strong showing at The Opening regional in Houston put eyes on the 4-star inside linebacker. His size and speed combination is rare for modern inside linebackers, which is a position slowly dying in Texas football because of the advent of the spread attack. Texas went out of state for its inside linebacker in the 2019 class, but hope Gbenda will be the next Houston-area prospect to follow Herman to Austin. He’s picked up eight new offers since Feb. 26.

Morris named Texas among his top three schools on Sunday. The long, lean safety is close with UT safeties coach Craig Naivar from the coach’s time at Houston. Morris could remind some Texas recruiting fans of Sterns, the 5-star who signed with Texas in December and enrolled early. Morris isn’t as polished as Sterns, but he can play physical like a safety and excel in man-to-man coverage like a cornerback. Morris is growing into his frame and that will make him an improved tackler as a senior.

Texas secured Katy defensive tackle Moro Ojomo in the 2018 class and hopes another Tiger will join the 2019 class. Glass is the top-rated running back in Texas and would be a great addition to the backfield. He once teamed up with Kyle Porter to help Katy win a Class 6A title in 2015 and talked about reuniting with his former teammates during a visit to Texas for junior day. IMG Academy (Fla.) running back Noah Cain is also squarely in the mix for the Longhorns because of assistant coach Stan Drayton.

The Starting 5: Texas is in and is the Big 12 Tournament important?