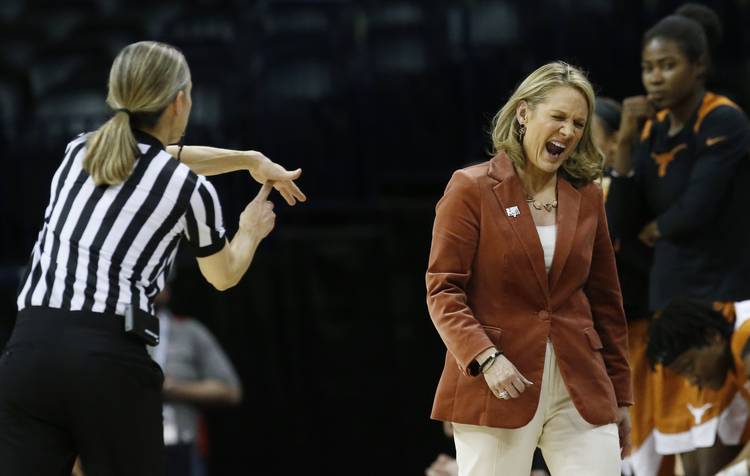 Texas head coach Karen Aston is given a technical foul in the second half of an NCAA college basketball game in the championship game of the women's Big 12 conference tournament in Oklahoma City, Monday, March 5, 2018. (AP Photo/Sue Ogrocki)

OKLAHOMA CITY — A Big 12 championship game that featured quick tempers from both sides switched for good when Texas coach Karen Aston was assessed a rare technical foul in the final minutes.

Baylor was nursing a 65-64 lead when Aston was called for the technical with 1:43 to play. The Lady Bears finished with a 12-5 run and walked away with a 77-69 victory Monday night at Chesapeake Arena, Baylor’s eighth tournament championship in the last nine years.

It was Aston’s first technical of the season.

“I had a poorly, poorly timed technical that I take full responsibility for,” Aston said afterward. “I’m disappointed in myself. Definitely my fault on that one.”

The No. 2-ranked Bears (31-1) and eighth-ranked Longhorns (26-6) still have work to do. The 64-team field for the NCAA Tournament will be announced on Monday evening.

It was Baylor’s 18th win over Texas in their last 19 meetings. Still, the Longhorns looked primed for an upset when Brooke McCarty drilled a three-pointer to give Texas a 58-57 lead with 5:44 to play. Bears coach Kim Mulkey called it “one of the gutsiest performances” she’s seen since she took over the program in 2000.

“There wasn’t enough X’s and O’s for me to draw up the last five minutes of that game,” Mulkey said. “What it boiled down to is kids that had to play three games in three days and they had to play the whole time because we had no substitutes.”

Baylor, though, arguably has the best 1-2 front-court tandem in the country in 6-7 post Kalani Brown and 6-4 forward Lauren Cox. Brown, voted the tournament’s MVP, had 20 points and eight assists. Cox impressed with 13 points and 12 boards, but her seven blocked shots were just as pivotal.

Brown also was involved in the game’s most memorable play. She received a pass for a breakaway layup, but crumpled to the ground when she was fouled by Texas forward Jordan Hosey.

On the bench, injured Bears guard Kristy Wallace openly shed tears after the play, fearing Brown was seriously hurt. After a brief timeout, Brown returned to the court and received thunderous applause to take her free throws.

Brown and Mulkey, though, laughed when speaking about the play an hour after the game.

“My ankle kind of twisted and my pain tolerance is zero,” Brown said, laughing at herself. “I guess you can call me a big cry baby. When I went over (to the bench), I popped some Ibuprofen in and my team was like, come on Lani, we need you. And I know they needed me.”

Mulkey, overhearing Brown’s comments, quipped, “Your mother has spanked you harder than that (foul).”

Texas guard Lashann Higgs scored 14 of her 20 points in the first quarter to help give the Longhorns a fast start. McCarty had 16 points and Jatarie White and Ariel Atkins had 12 apiece.

Aston said she has believed all season that Texas can beat any Top 25 team. Monday’s loss did not change her outlook.

“We have beaten some teams that are really, really good and I think we’re just a few situations away from being able to beat anybody in the country,” she said. “You have to be able to do that (when opportunities arise) and I understand that.”