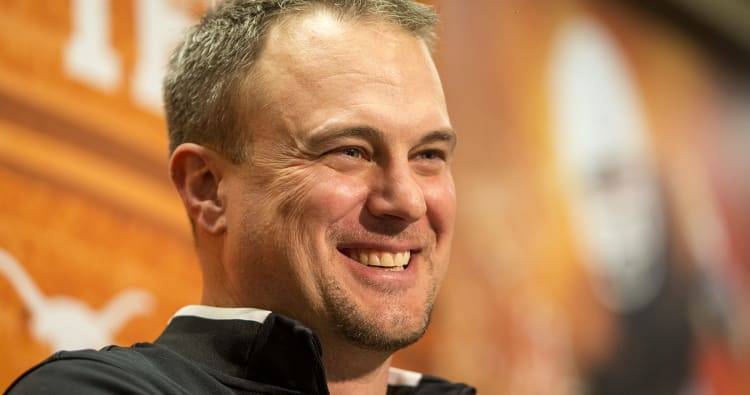 The Longhorns have signed three tight ends in Tom Herman’s first two recruiting classes. It’s clear the new coaching staff values the position more than Charlie Strong did toward the end of his tenure because of the choice to run the air-raid offense, which devalues tight ends who can catch the football.

The depth chart needed an influx of tight end talent when Herman took the job and he quickly signed a pair of prep tight ends in 2017 — Cade Brewer and Reese Leitao — while adding a graduate transfer from Syracuse in Kendall Moore. Brewer impressed in his first season.

Malcolm Epps, a 4-star tight end from Spring Dekaney, was the lone tight end to sign in the 2018 recruiting class. The Longhorns once held a commitment from Dominick Wood-Anderson during the cycle, but the No. 1-ranked JUCO tight end eventually de-committed and signed with Tennessee. The Longhorns need the 6-6 Epps to become a matchup advantage on third downs and in the red zone.

The position is of importance again for Herman as he tries to build depth in the tight ends room after inheriting little to gloat about. Texas will undoubtedly sign one 2019 tight end. It wouldn’t be shocking to see the Longhorns ink two players at the position if the right duo presents itself.

Temple’s Jared Wiley is becoming the priority for Texas at tight end in the 2019 class after receiving an offer soon after visiting Austin for junior day. The 6-5, 225-pound prospect is a dual-threat tight end, meaning he can threaten defenses as a receiver and put his hand in the ground and block defensive ends in the running game. He caught 25 passes for 323 yards and four touchdowns as a junior.

Baylor Cupp is another in-state tight end who received an offer following a visit for junior day. Texas A&M appears to be in the pole position for the 6-6 prospect who was named a first-team all-district performer for a Brock team that ended up winning a state championship.

It’d be ideal for Texas to sign both players. They offer similar skill sets and possess the ability to move around the field as mismatches. Texas wants to use a tight end in the natural position, but also as a flex tight end and an H-back who moves around the backfield. Think David Thomas with more size. Both Wiley and Cupp are those types of players and the Longhorns could shut down the position if one commits early. Wiley is the safest bet as of March.

Herman inherited a lack of depth and talent at a few positions when he took over and it can be argued that tight end was at the top of the list, especially once Andrew Beck was lost for 2017 with an injury. Texas was forced to rely on Moore and Brewer. Moore is departed and Brewer accounted for nine receptions in 10 games.

The Longhorns hope Leitao, who ended up redshirting after an early-season suspension, becomes a target. The return of Beck should help the running game. Epps won’t arrive until the summer.

Herman has improved the tight end room. He’s yet to fix it. Another solid signing or two would help Texas start truly building talented depth at the position. A player like Wiley would arrive on campus with Brewer, Leitao and Epps to teach him the ropes and the position. That’s not a luxury a UT tight end was afforded over the last decade.