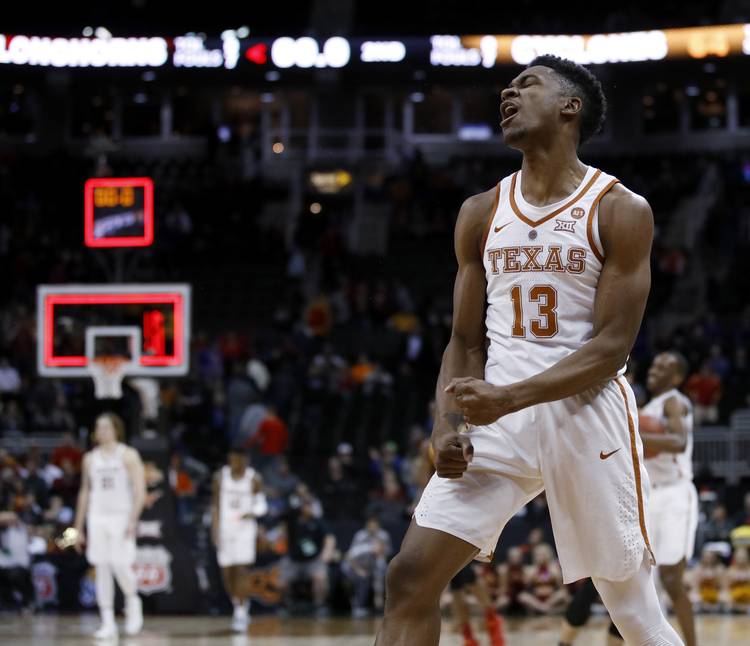 With a seven-man lineup, the Longhorns are still motoring along the Big 12 highway having won four of their last six games. Wednesday’s 68-64 win over Iowa State was another example how this team somehow continues to keep on trucking.

Just over the horizon, the Longhorns (19-13) can finally see the unmistakable glow of the NCAA Tournament. It could be the bright lights of Dayton, Ohio. But it’s the big city, nonetheless. And it sure beats Austin in mid-March.

“I think it’s held together by our guys’ spirit and willingness to fight for each other,” Smart said.

Junior Dylan Osetkowski believes the team’s collective gumption cannot be questioned. “You go down the line,” Osetkowski said, “we’ve got a group of guys that talent-wise, energy-wise, spirit and fight is through the roof.”

Seventh-seeded Texas nearly shot its way out of the NCAAs in the first round of the Big 12 tournament. The Horns opened the game by going 0-for-9 from 3-point range. This was perfect for 10th-seeded Iowa State (13-18). In fact, the Horns made only eight of 31 attempts from long range.

But Osetkowski, who started 0-for-4, kept shooting. He finally connected and scored 10 straight points as part of a 22-3 run that bridged the first and second halves. Osetkowski finished the night with a team-high 20 points despite hitting only three of 12 3-point shots.

“It’s not tough when you’ve got 20 other people behind you — managers, graduate assistants, players, coaches — and continue to believe in you and want you to shoot the ball as much as possible,” Osetkowski said. “That’s what this team needs. They need me to shoot open 3s.”

Texas’ muffler belched smoke when Kerwin Roach II felt something come flying out of his mouth. It was the bottom half of a tooth, which was cut in half by an inadvertent elbow. Bill Busch, the official dentist of the Kansas City Chiefs, did quick work at halftime and glued it back in.

“I was kind of worried because I had braces for a little while,” Roach said, “and I thought all that money went to waste.”

No tooth, no problem. Roach returned and had nine points and seven assists in 37 minutes. He stated arguably the biggest play of the game with sheer hustle.

A loose ball hit the floor with just under four minutes remaining. Roach dove for the ball and tipped it to Jase Febres, who was in the right corner. Febres saw Sims under the basket and fired a bullet pass. The freshman caught it and threw down a two-handed dunk, giving Texas a 64-58 lead.

“That play was a representation of what you’re talking about,” Smart said. “It wasn’t pretty. It wasn’t what we drew up. It wasn’t even three guys that are used to being in the game together much. But they found a way, and again, it wasn’t pretty but we got it done. In games like that, that’s what you have to do.”

Guard Matt Coleman wasn’t getting many pats on the back while sitting on the bench in foul trouble. He played the final 6:13 with four fouls and hit a critical 17-footer with 44 seconds left.

On nights like this, Coleman said it’s his job to keep everyone else encouraged and engaged.

“Dylan, the first time we played Iowa State, he hit seven 3s,” Coleman said. “Jase is going to be one of the best high-level shooters in college basketball. You just have to keep reminding them and keep encouraging them. Just breathe confidence in them. Eventually the right one is going to fall.”

Jacob Young got the biggest rebound of the night, a man-sized board with 13 seconds left that basically sealed it. Iowa State players tried to claw at it, but Young swung his arms like there was no tomorrow. In March, tomorrow isn’t promised to anyone, really.

All of this happened with Bamba sitting on the bench, dying to get into the game. His sprained toe kept him sidelined again. At this point, with an NCAA bid likely secured, it’s possible UT sits him the rest of the weekend.

So Smart will press on with his seven Longhorns. And if Texas Tech does what Iowa State and dares the Horns to shoot threes, that’s what they’ll do.

“These guys are Division I players,” Smart said. “They can make these shots. Now, we missed a bunch in a row a certain times. But we made enough to win.

“Sometimes, you’ve got to have faith they’re going to be able to jump up and shoot ’em in.”