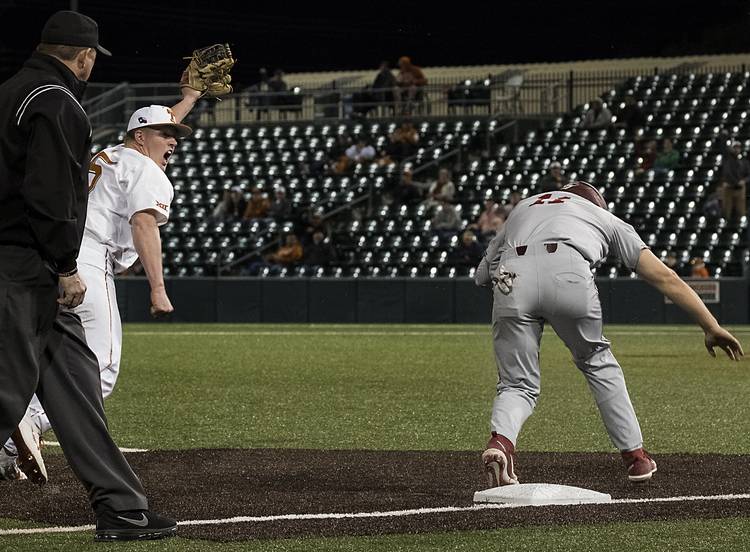 After Texas and Stanford exchanged jabs on Thursday night, Austin Todd — ailing thumb and all — landed an uppercut.

Todd’s pinch-hit single was the difference in Texas’ 8-6 victory over Stanford at UFCU Disch-Falk Field. UT held 4-0 and 5-2 leads in the opener of a four-game series, but the Cardinal forced a tie in the seventh inning. Three runs after the seventh-inning stretch, though, led the Longhorns to their ninth win of the season.

“The thing I enjoyed the most about tonight is we popped early, they popped us and then we countered,” Texas coach David Pierce said. “That’s a sign of our maturation right there.”

Texas generated some early offense against Stanford junior Tristan Beck, a right-hander who Pierce had previously pegged as a “future first-rounder.” The Longhorns scored in each of Beck’s four innings and they took a 5-0 lead in the fifth frame. Coming off a 38-run stretch in three wins against Northwestern, Texas was paced by a solo homer from Kody Clemens in Thursday’s third inning.

Stanford responded by scoring twice in the fifth and sixth innings. It then tied the game in the seventh session with a two-out single.

In the seventh inning’s bottom half, Ryan Reynolds broke the tie with a two-out hit that scored Masen Hibbeler. The Longhorns eventually moved runners to second and third base. After Stanford made a pitching change, Todd was summoned off the bench to deliver his two-run hit.

Todd had missed the previous six games with an injury to his left thumb that he likened to a “high ankle sprain, basically, in the ligaments.” Pierce told reporters on Wednesday that Todd would be limited to defensive and pinch-running appearances against Stanford. Todd, though, showed enough in Wednesday’s batting practice to factor into Thursday’s line-up.

Batting right-handed against the left-handed Jacob Palisch, Todd smacked a 1-1 offering the opposite way.

“Before I got hurt, I was seeing it pretty good. Things just weren’t falling,” said Todd, who entered the game with a .130 batting average. “It’s like riding a bike, you can’t forget it.”

Texas got four solid innings from freshman Nico O’Donnell, who was making his third career start. Fellow freshman Bryce Elder picked up the win in relief. Chase Shugart earned a two-inning save, and Pierce said the 32-pitch outing won’t scratch Shugart from starting on Sunday.

Around the bases: Ahead of the game, Texas football coach Tom Herman threw out the ceremonial first pitch and announced the teams’ starting line-ups. … Stanford assistant coach Tommy Nicholson was acknowledged ahead of the second inning. Nicholson started 182 times at Texas between 1998-00. He also coached twice at his alma mater. … Stanford, which ranked 11th nationally in ERA, allowed more than five runs for the first time in 2018. … Clemens went 2-for-4 with two runs and two RBIs. His hitting streak is now at 13 games.

The Dotted Line: Texas hopes for a blockbuster Saturday in recruiting