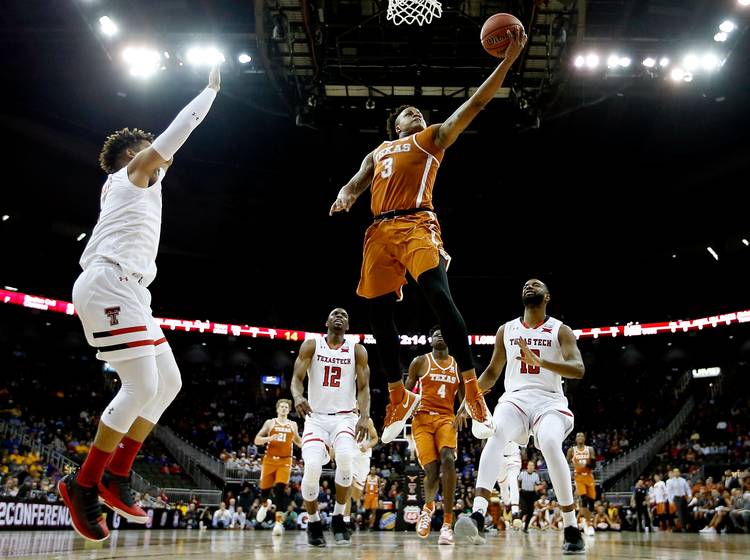 Jacob Young #3 of the Texas Longhorns drives toward the basket during the Big 12 Basketball Tournament quarterfinal game against the Texas Tech Red Raiders at the Sprint Center on March 8, 2018 in Kansas City, Missouri. (Photo by Jamie Squire/Getty Images)

The 6-foot-2 guard from Houston has always had bullet-proof confidence. His accuracy? Well, if Young ever got into a shoot-out in a saloon, he might hit everyone but the bad guy.

Not Thursday, though. Not against second-seeded Texas Tech. Suddenly, and with no advance warning, Young couldn’t miss. From the right corner, bang. On the wing, swish. It was a perfect time and perfect place for the Longhorns’ highest-scoring performance of the season.

Young had a career-high 29 points and was 6-of-7 from 3-point range, but unfortunately most of his teammates were firing blanks. Texas Tech was the team left standing after a 73-69 victory that felled Texas in the Big 12 tournament quarterfinals.

Texas Tech (24-8) got 25 points from Keenan Evans and moved on to the Big 12 semifinals to face third-seeded West Virginia.

The seventh-seeded Longhorns (19-14) did what they needed to in Kansas City. Texas’ win on Wednesday against Iowa State likely clinched an NCAA Tournament bid. UT even got Mo Bamba back on the floor for 14 minutes against Tech to test out that sprained toe. All’s well there. The Horns should have nothing to worry about on selection Sunday.

If they can get more from Young — along with simply consistent performances out of everyone else — Texas could have a good time next week.

“I’ve always been doubted by critics who say I’m not a Big 12 player,” said Young, who had 11 field goals and finished one shy of tying Kevin Durant’s tally against Kansas. Durant had a UT-record 12 field goals at the Big 12 tournament in 2007. “To me, I’ve always seen it in my eyes, and my coaches and teammates know I’m a Big 12 player.”

Smart recalled that moment from one year ago and added, “pretty damn good Big 12 player tonight.”

Yes, indeed. Only the Longhorns can’t afford to have their starters run into dry spells. Matt Coleman had 20 points and went 10-for-10 from the free-throw line. But starters Dylan Osetkowski, Jase Febres, Jericho Sims and Kerwin Roach II all combined for 10 points.

Those last four contributed to a horrific start that nearly crippled Texas from the beginning. The Horns opened the game 0-for-7 from 3-point range and didn’t score a single point in the first five minutes. Tech never ran away with it, though.

“We knew they weren’t going to shoot like that all night,” Tech’s Keenan Evans said. “So we tried to take advantage while we could.”

Young hit his first 3-pointer with 6:04 left in the first half and Texas trailed 22-15. At that point, the Horns were 1-for-9 from beyond the arc. Bamba hit another 3-pointer from the top of the arc just before halftime, and the Horns’ deficit was down to seven.

Bamba was supposed to play just 10 minutes, the maximum allowed by trainer Laef Morris. The coaching staff haggled for and received four more. “I think you guys figured out that I was on some sort of restriction while I was out there,” Bamba said. “It was tough, but it was what’s best for me and what’s best for the team. I can’t complain.”

Young got going after halftime with two 3-pointers from the right corner. Then he hit another from the top of the key. He swished one with 11:53 remaining and drew a foul — a rare four-point play that got Texas within four.

Where, oh, where has this been the last two seasons?

“JY does that every day in practice,” Febres said. “So it wasn’t a shocker for many of us. We know how he pays. He’s a bucket-getter. So when he did it, it was like, ‘Finally!’ That’s the JY we all know.”

Said Bamba: “Are you surprised? I’m not because he does it every day in practice. I’m surprised it took this long.”

Hitting 3-pointers in Cooley Pavilion is far different from doing it inside the Erwin Center, Sprint Center or just about anywhere else that leaves Young in the center of attention.

“It’s exciting for him,” Smart said. “It’s easy in practice when the starters are on the Orange team and you’re on the White team, and you kind of have the green light and no one’s questioning anything and you can just flow. This was the first time where he’s really looked like that in a game.”

One of Young’s best plays was a pass to Bamba for a dunk with 2:29 remaining. That made it a three-point game. By that point, it was clear Young was UT’s offense for better or worse. Evans hit an 18-footer and then made two free throws in the final minutes to help wrap it up for Tech.

The Horns can easily dismiss their horrid starts in two games in Kansas City. After all, they beat the Cyclones and almost knocked off the Red Raiders. Do that in the NCAAs, and it’ll be curtains.