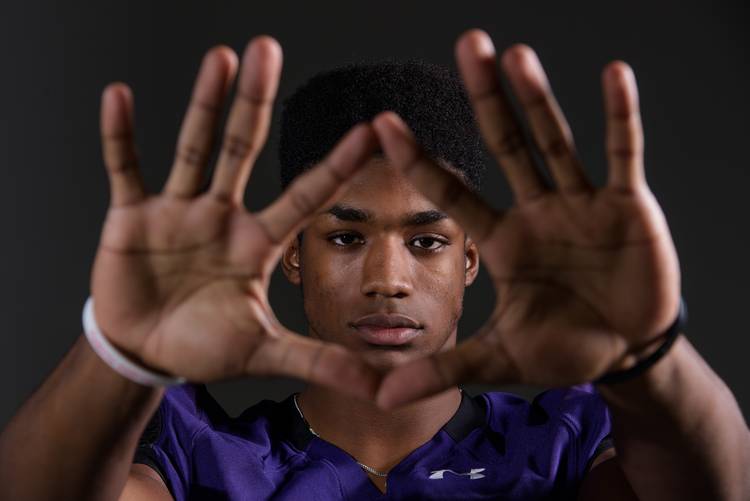 Analysis: Ibeneme is an incredibly strong prep defensive end who wins at the point of attack with raw power. That strength will serve him well as he continues to learn the nuances of the defensive end position. He’s a big-bodied lineman with a good first step and explosive hands. He isn’t a premier edge rusher, but he’s more than capable of getting to the quarterback. It’s possible he grows into a three-technique defensive tackle or plays the edge in an odd-man front.

Analysis: Morris recently announced a final three of Texas, LSU and Oklahoma. The talented safety is a long, learn prospect who has the range of a center fielder and the mindset of an outside linebacker. Morris isn’t afraid to strike an opponent and help in the run game. He excels in pass coverage, especially when he’s allowed the freedom to go make plays in zone defense. Morris has proven his ability to cover elite wide receivers in select 7-on-7 tournaments and at camps like The Opening regional in Houston.

Analysis: Parker is a terror off the edge and one of the state’s premier pass rushers. He recorded 13 sacks and 21 tackles for loss as a junior, earning defensive MVP honors in 11-5A. He accounted for 86 tackles. Parker is exceptionally quick for a prospect his size and could play outside linebacker in the right college system. Parker is likely to add weight and remain a 4-3 defensive end in Lubbock. His highest upside is as a stand-up rusher in a 3-4 scheme. He committed to Texas Tech in May of his sophomore year.

Analysis: Ellis defines vertical threat. He’s a big play waiting to happen and can beat defenses over the top or turn quick passes into long gains because of his quickness and ability to make defenders miss in small space. Ellis committed to Baylor but has continued to look at other schools, including a visit to Texas for junior day. He caught 56 passes for 1,248 yards 14 touchdowns as a junior, earning first-team all-district honors for the second straight season.

Analysis: Shepherd is quickly becoming a hot commodity on the recruiting trail because of his potential and unique frame. He’s a long-armed offensive tackle with athleticism, which is one of the hardest combinations to find in football. He’s approaching 25 offers based on his potential and overwhelming performances at the prep level. He was a first-team all-district selection as a junior and put on a clinic at The Opening regional in Houston. Texas and Texas A&M are in a battle for the four-star tackle who could play on the left or right side in college.

The Dotted Line: Texas hopes for a blockbuster Saturday in recruiting