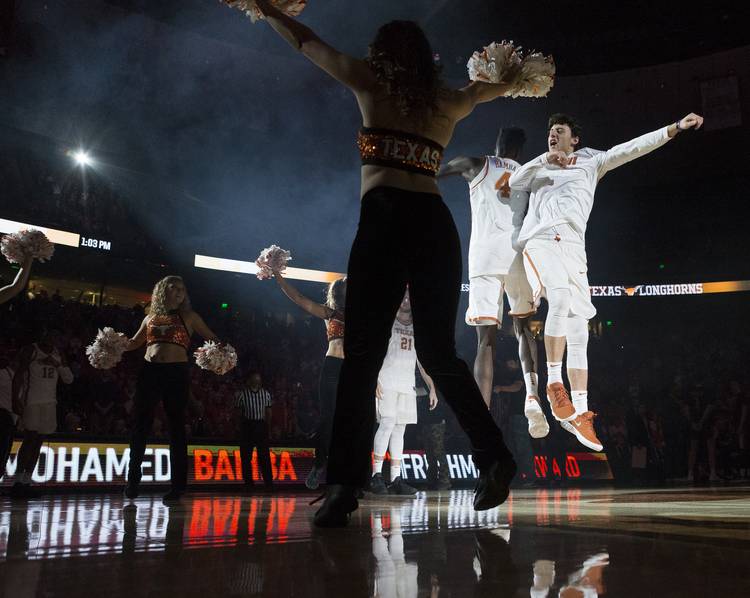 Initially, this had the look of being the best season in Shaka Smart’s three years with the Longhorns. Texas was 10-4 after an overtime win at Iowa State on Jan. 1, and there was optimism abound.

But Jase Febres knew something was wrong with teammate Andrew Jones, the team’s second-leading scorer at the time. The freshman from Houston had seen that look before.

“I was telling my coaches before Drew was diagnosed, there’s something really bad with Drew,” Febres said. “He and I were really close and he was telling me, ‘I feel really bad, really bad.’

“As soon as I saw the look on his face, I told coach Smart that if he has cancer, don’t be surprised,” he added. “That’s how my dad looked, and then he ended up having it.”

Orlando Febres, Jase’s father, died from intestinal cancer in September 2015. It spread to his lungs, and as Jase said, “after that, it was bad.” On Jan. 4, two days before the Baylor game in Waco, Smart learned Jones had been diagnosed with leukemia. He told the players on Jan. 9 and made a public announcement on Jan. 10 — the same day Texas hosted TCU.

Jones’ diagnosis triggered a series of events that could have derailed the entire season. And yet when the NCAA Tournament field is announced on Sunday, the Longhorns (19-14) should see their name on the board.

To say it’s been an emotional two-month roller-coaster is understating it. Smart said Michigan State’s Tom Izzo once gave him some key advice: “Sometimes it’s good to have a crisis that you have to work through and figure out,” Smart said. But this was uncharted territory for everyone inside Cooley Pavilion.

During an emotional team meeting about Jones, players asked if the 20-year-old from Irving was going to die. Scared and not knowing what leukemia really is — a cancer of the blood — at least two players asked privately if they could contract it from being around him, two sources said.

This wasn’t some spare reserve, either. Jones is arguably the most well-liked player on the roster. The entire UT community and fan base rallied around him. Even Gov. Greg Abbott offered his support via Twitter.

“It was basically our teammate, Andrew,” Jacob Young said. “All he wanted to do is play basketball. He can’t do that. We said to ourselves that we’re going to do what he wants to do. Even though he’s on the healthy side now, I know he wants to be here helping us win.”

Asked if this was the hardest thing he’s ever dealt with as a coach, Smart paused. “I’ve dealt with family-type of deaths,” he said. “But that was up there.”

Hours after the news became public, Texas faced 16th-ranked TCU. Perhaps fueled on emotion alone, the Horns won 99-98 in overtime. Maybe they got some help from above, too. Jaylen Fisher, TCU’s stud point guard, missed a potential game-winning layup from point-blank range just before the buzzer.

But Texas’ emotional tank was empty three days later. The Horns looked listless and lost in a 65-64 loss at Oklahoma State, a game that didn’t look so bad after OSU went on to beat Big 12 champion Kansas twice.

The school organized a fundraiser for Jones, and the total has reached almost $200,000. Every Big 12 team showed its support by wearing various “AJ1” shirts in warmups. ESPN’s “College GameDay” came to campus on Feb. 3 and basically put on an hour-long, get-well-Andrew broadcast from the Erwin Center. That led to a sizzling 79-74 win over 12th-ranked Oklahoma.

At that point, Texas was 15-8 and still doing OK, all things considered. The next game, a home date against Kansas State, changed things. The Erwin Center was, as one staff member put it, “a cemetery.” An announced crowd of 9,211 couldn’t care less as Texas lost to K-State by three.

The Horns looked like they didn’t care, either, in an 87-71 loss to the Horned Frogs in Fort Worth. Another loss, this time a 74-73 double-overtime decision to Baylor, was the tipping point.

In a highly-charged team meeting immediately after the game, things got real, according to those who were in the room. Smart said “there was some real fireworks after that game.” Asked about it days later, point guard Matt Coleman shook his head. “Oooh, yeah. It was something,” he said.

Said Smart: “I remember my high school coach whenever guys got into a fight, he was big on letting them fight for a little while. We didn’t have fisticuffs; ours was verbal. But I learned a lesson from that situation. Sometimes you’ve got to let players work things out.”

Texas rebounded with a win at Oklahoma, but Bamba suffered a sprained toe injury in the process. The Big 12’s leading rebounder and shot blocker tried to play through the pain at Kansas State. He wound up sitting for three games.

Then on Feb. 23, Yahoo Sports published a detailed story alleging wide-spread corruption in college basketball. Texas guard Eric Davis Jr., who was averaging 8.8 points per game, was named as someone who allegedly accepted $1,500 from an agent.

UT officials decided to withhold Davis from all competition while compliance looked into the matter, though the school pushes back against those who label it a “suspension.” Smart said Davis was advised to seek legal counsel. Neither Davis nor his family members have spoken publicly about the matter.

“Just want to play basketball,” Davis tweeted on Wednesday, the first day of the Big 12 tournament in Kansas City.

Without Jones, Bamba and Davis — half of the six players on UT’s media guide cover — Texas went 2-1 in the final three games of the regular season. Bamba did play the first half in the Oklahoma State rematch but sat down for good at halftime. The regular-season finale win over 20th-ranked West Virginia was considered to be a difference-maker in the eyes of the NCAA selection committee.

Texas grabbed a 68-64 win over 10th-seeded Iowa State in the Big 12 tournament. Young poured in an eye-popping 29 points against Texas Tech but it wasn’t enough as UT lost 73-69 in Thursday’s quarterfinals.

Smart is 50-49 in three seasons at Texas. His teams have played in only one NCAA Tournament game so far, and Texas lost on a half-court shot at the buzzer. Aside from Davis, Kerwin Roach II is the only scholarship player remaining from that Northern Iowa heart-breaker.

The offense is frustrating, and the Horns are the worst 3-point shooting team in the Big 12. But this team, now down to a seven-man lineup with three freshmen starters, is likely headed to the “Big Dance.”

“Don’t taken anything for granted,” Roach said. “Go out there and play your ass off. Play your heart out. it could be your last game. Anything can happen in the tournament, that’s what I can relate to them from my freshman year.”

After Thursday’s loss to Texas Tech, Smart didn’t want to put the cart before the horse.

“Hopefully we get an opportunity to go play in the Big Dance,”  Smart said, “and, man, if we do that, I just hope we can get these guys to let it rip.”