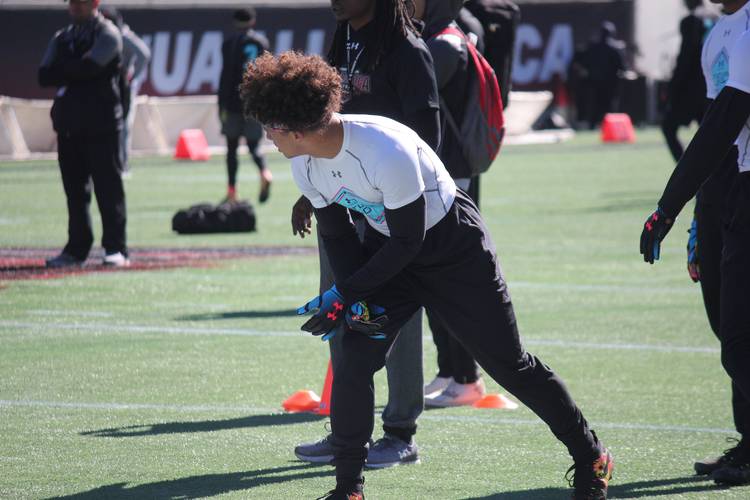 Cuero 5-star wide receiver Jordan Whittington is the No. 1 player on the Fabulous 55. (Mike Craven)

An important weekend of recruiting is awaiting the Longhorns program with Rice grad transfer Calvin Anderson and 5-star wide receiver Jordan Whittington set to decide on Saturday, and with the Longhorns in the running for both. Anderson would provide Texas with a potential starting left tackle for the 2018 season. Whittington would give Tom Herman the No. 1-ranked player on the 2019 Fabulous 55.

Whittington is set to announce at 2 p.m. The time of Anderson’s announcement is unknown.

Saturday is a chance for Herman and his program to make another statement. Anderson emerged as the top grad transfer offensive lineman available and is deciding between Texas, Oklahoma, Auburn and Michigan. He graduated from Westlake and signed with Rice in 2014.

Whittington is the state’s top-ranked player in the 2019 class. He plays offense, defense and return kicks at the prep level. The two-time district MVP wants to play slot receiver and help on special teams in college. He’s the No. 4-ranked wide receiver in the country, per the 247Sports composite.

What would it mean to land Anderson?

Texas signed the third best class in the nation and the top class in the Big 12. The Longhorns signed the state’s top five players, its best running back and the best defensive tackle on national signing day or during the early period. Anderson might be more important than any of those players for the immediate hopes of Herman.

Texas needs to improve along the offensive line to regain relevance. There is no way around that fact and the staff, to its credit, addressed it by signing five linemen in 2018 and by hiring Auburn offensive line coach Herb Hand to perform the same job in Austin that he did in the SEC.

Hand’s first year on the job becomes remarkably easier if Anderson joins the fold and gives Texas an immediate potential starter at left tackle. It pencils in one of the starting spots of the five on the  line and helps allow other players on the roster to slide to more comfortable positions. Texas must replace Connor Williams, who declared for the NFL draft after his junior season.

What would it mean to land Whittington?

The Longhorns are still searching for the momentum that was gained during the 2018 class. Herman prefers a slow approach to recruiting, so it’s not panic time. Texas would rather lose the perception battle in March and win the signing day battles in December and February. Texas sits at two 2019 commitments heading into the weekend — Port Neches Groves quarterback Roschon Johnson and Huntsville defensive end T’Vondre Sweat.

Whittington would provide Texas with that continued momentum for 2019. He’s a 5-star prospect and the No. 1 player on the Fab 55. He’d be the third member of the Fab 55 to commit to Texas. He also would provide the Longhorns the type of offensive playmaker that they have yet to sign under Herman. Whittington is a true game-changer with the ball in his hands, whether it be as a runner, rusher or returner.

Herman likes relying on slot receivers but he’s yet to find consistency at the position. The departure of Reggie Hemphill-Mapps compounds the issue more, not to mention seniors like Jerrod Heard won’t be on campus when Whittington arrives. Just as Texas hopes the defensive backs it signed in the 2018 class will make an impact this coming season, Whittington could provide that type of instant help on the offensive side of the ball.