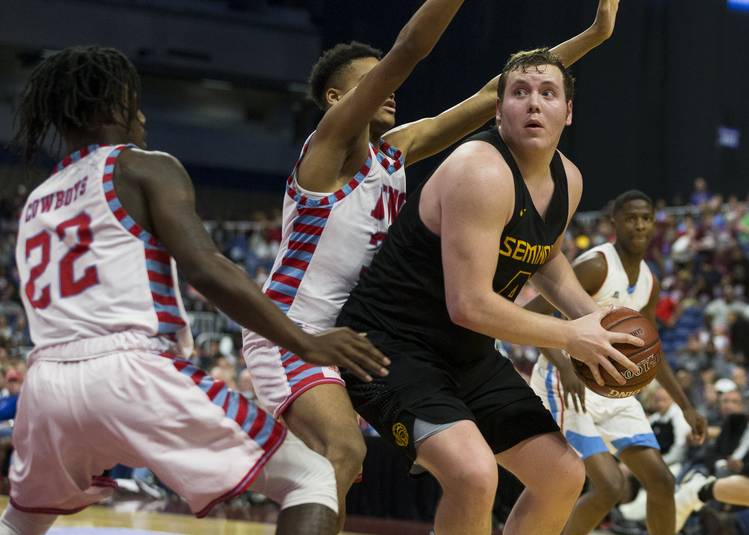 SAN ANTONIO — His future lies in college football, but on Friday afternoon Reese Moore did more than his part for his high school’s basketball team, which was appearing in the UIL state tournament for the first time this century.

Moore, an offensive lineman who was ranked 44th on the final 2018 Fabulous 55, signed with Texas in December. He’ll move to Austin from his West Texas hometown of Seminole in June and kick off his preparations for the 2018 college football season.

But thoughts about battling for a spot in the Longhorns’ offensive line rotation didn’t matter much to Moore in the wake of Seminole’s loss to Dallas Carter in a Class 4A state semifinal at the Alamodome. He knew the 80-62 defeat had brought an end to his four-year run with the Indians’ varsity basketball team.

“I’m just going to miss being around these guys,” said the 6-6, 285-pound Moore after the game. “I’ll miss practicing with them and just hanging out at Sonic, because there’s nothing else to do in Seminole.”

Moore grinned as he joked about Seminole’s nightlife, but grew serious when discussing what this latest basketball season meant to his school and hometown.

“I’m really proud of what we accomplished this year,” he said. “I hope it kicks the door down for the next generation of players that come through Seminole.”

Moore scored a game-high 21 points, grabbed eight rebounds and even doled out a pair of assists. He also didn’t take a seat on the bench until late in the game, despite facing a tenacious Carter defense that pressed after every made basket.

“I’m going to miss the big guy,” Williams said. “He’s just a special athlete. For a guy that size to be as nimble around the basket as he is, that’s special.”

Not surprising given Seminole’s remote location between Lubbock and Odessa on the South Plains, Moore was off the football recruiting radar until he put up a strong junior season.

Former Longhorns coach Charlie Strong and his staff did not recruit Moore, who played tight end at Seminole, and he came away unimpressed with Texas after attending a camp in Austin and watching in person as the Longhorns edged Baylor 35-34 in 2016.

Moore recalled that he told his mother, Kathy, that “if I never go to Austin again, I’m OK with that.”

Things changed after UT hired Tom Herman in November 2016. A year ago, Moore visited Austin to attend a spring practice and liked how Herman and Longhorns offensive line coach Derek Warehime conducted business. A few weeks later, he returned for the Orange-White game and brought along his older brother, Tanner Moore, an assistant coach for both Seminole’s football and basketball teams.

By the time the brothers had driven west out of the Hill Country and into the Rolling Plains after taking in the Longhorns’ intrasquad scrimmage, Tanner Moore knew the time spent on campus had left a deep impression on his younger brother.

“I could have told you when we left that Reese was committing to Texas,” Moore told the Statesman last year. “I know Reese better than anyone, and I knew what coach Herman and coach Warehime were selling to the players would resonate with Reese.

“Reese hates to lose, and Herman is building a program of high expectations. He wants to restore Texas to where it should be, and being a proud Texan and upholding the state’s university mattered to Reese.”

Before he leaves Seminole for good, Reese Moore may throw the discus for his school’s track and field team or just concentrate on prepping for his first college football season. Regardless, he’ll still have time for a few more Sonic limeades with his friends.