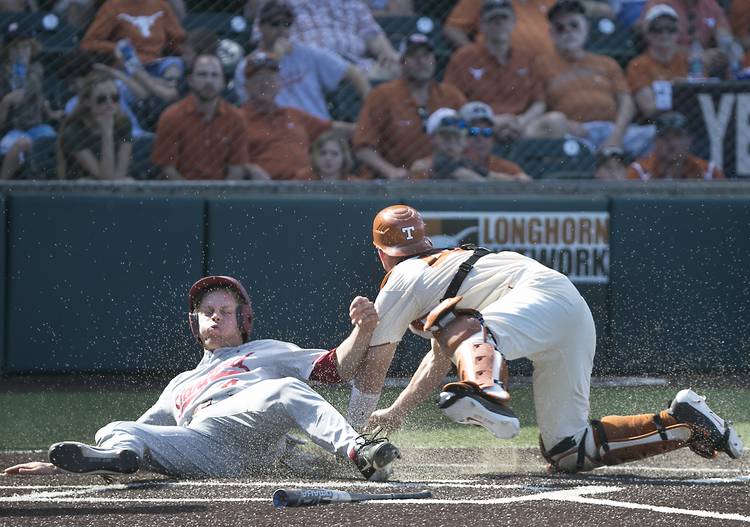 Texas catcher Michael McCann can't come up with the ball to make a tag on Stanford's Nico Hoerner as he scores in the third inning of UT's 9-3 loss at UFCU Disch-Falk Field on Saturday afternoon. RALPH BARRERA / AMERICAN-STATESMAN

They stood in the right field stands, some with baseballs, caps, pens and sharpies in hand, waiting for the players to go over and sign autographs and allow pictures. It’s a tradition after every game at UFCU Disch-Falk Field.

But Saturday afternoon, after those same fans had watched the No. 7 Stanford Cardinal beat the No. 23 Texas Longhorns 9-3, the kids, players’ families and friends stood there waiting. No player greeted them – not for about 25 minutes. No player signed autographs. And no player spoke with the media after the game — though it’s not unusual after some games, win or lose.

Instead, the Longhorns met inside the locker room — a Texas spokesperson did not confirm or deny that it was a players-only meeting. Texas (9-6) had been blown out for the second straight game by the Cardinal. In a four-game series that’s viewed as a measuring stick and a test — clichés overused in sports — the Longhorns have lost the last two games. They can split the series with a win Sunday afternoon.

Texas had right-handed sophomore Blair Henley on the mound Saturday afternoon. Henley (2-1) has been the Horns’ best starting pitcher this season, allowing one run in 17 innings. But he allowed five runs over the six innings he pitched. He — along with most of the 6,349 fans at the Disch — grew frustrated with home plate umpire Casey Moser’s strike zone.

“He had to make an adjustment to a low zone. The borderline calls just didn’t go his way,” Pierce said. “That’s part of it.”

Henley’s four-pitch arsenal – a fastball, change-up, curve and slider – was not as effective as it had been all season. Henley walked the third batter he faced. The fourth, sophomore first baseman Andrew Daschbach, doubled to the wall in left to give the Cardinal a 1-0 lead. It was the second run Henley had allowed this season.

In the second, with two outs and a runner on first, Henley was a strike away from getting out of the inning. But his next pitch hit third baseman Jesse Kuet in the back. Stanford’s next two batters slapped RBI singles to center. Then, with the bases loaded, Daschbach roped a single to left, pushing the Cardinal lead to five.

Henley didn’t allow any more runs after that.

“The third through the sixth, I loved it. He was ticked off, and he got in attack mode,” said Pierce, who pulled Henley in the seventh after he had thrown 107 pitches. “We got a big blow, so we’re back in the game.”

Redshirt freshman Zach Zubia mashed his third home run of the season in the fourth, slicing the deficit to 5-3. Later in the inning, Texas loaded the bases with two outs, but freshman center fielder Kamron Fields flied out to right.

Any hope of another Longhorn comeback win left the stadium when Cardinal left fielder Kyle Stowers sent a three-run homer over the right field fence in the ninth.

Around the bases: For the second straight game sophomore shortstop David Hamilton was pulled. He was removed in the top of the seventh after he had gone 0-for-3 with three strikeouts Saturday. Pierce said Hamilton’s right shoulder “is killing him.” Pierce said he isn’t sure if Hamilton will miss an extended period.