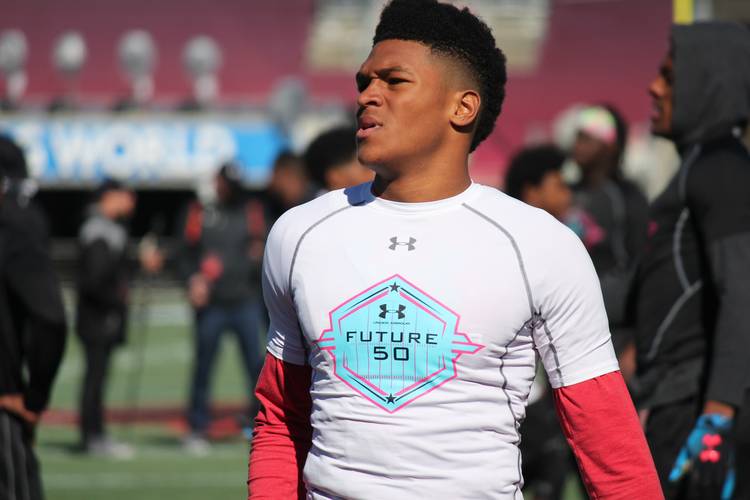 Analysis: Spears began his prep career at defensive end before his frame forced a move to defensive tackle. He’s an athletic tackle with the ability to play three-technique in a four-man defensive line or move to end in an odd-man front. Spears committed to Notre Dame in February over a dozen other offers. The big, athletic defensive lineman was an all-district selection as a sophomore and a junior.

Analysis: Richardson plays both sides of the ball in high school. He emerged onto the recruiting scene as a sophomore when he was named second-team all-district for his work at safety. He recorded 47 tackles, four tackles for loss, a sack and a forced fumble. Last year he spent more time on offense and ended the year as a first-team all-district selection after scoring 11 touchdowns and accounting for nearly 1,000 yards. Richardson will play safety in college. He’s not afraid of contact and can cover ground like a centerfielder.

Analysis: Ndoma-Ogar returned to Allen after spending his sophomore season at IMG Academy in Florida. The 4-star guard played at Allen as a freshman and returned as a junior to help lead the school to a Class 6A Division I state championship. Ndoma-Ogar is one of three Allen juniors to make the Fab 55, joining quarterback Grant Tisdale and wide receiver Theo Wease. Ndoma-Ogar is a physical guard with a low center of gravity. He excels in the running game and is a fine-tuned player because of the coaching he’s received at Allen and IMG Academy during his prep career.

Analysis: Young is listed as a cornerback on most recruiting services, but expect the 4-star from Fort Bend Bush to find a career in college as a safety. Oklahoma is looking like the most obvious destination for him and teammate Jamal Morris is also a safety on the Fab 55. Young is an athletic, strong defensive back with coverage skills. A move to safety would fit his body style and his physical skill set. It’s important for safeties to cover like cornerbacks in modern football and Young will hold an advantage because of his time spent playing man-to-man on the outside against elite wide receivers.

Analysis: Johnson essentially became a Longhorn when Tom Herman took over the head coaching position in Austin. The dual-threat quarterback from Port Neches-Groves became a frequent visitor to Austin once Herman arrived on campus and quickly became the obvious target at quarterback in the 2019 class. He pulled the trigger in July before his junior season and remained Texas’ lone 2019 commit until T’Vondre Sweat committed in February. Johnson puts up video game numbers at the high school level, beating defenses with his arm and his legs. He’s the two-time MVP of District 22-5A and has thrown for 5,236 yards and 61 touchdowns while rushing for 3,277 yards and 59 touchdowns as a two-year starter.

The A-B-Cs of the NCAAs: Longhorns wait it out, then see their name ‘and we were amped’