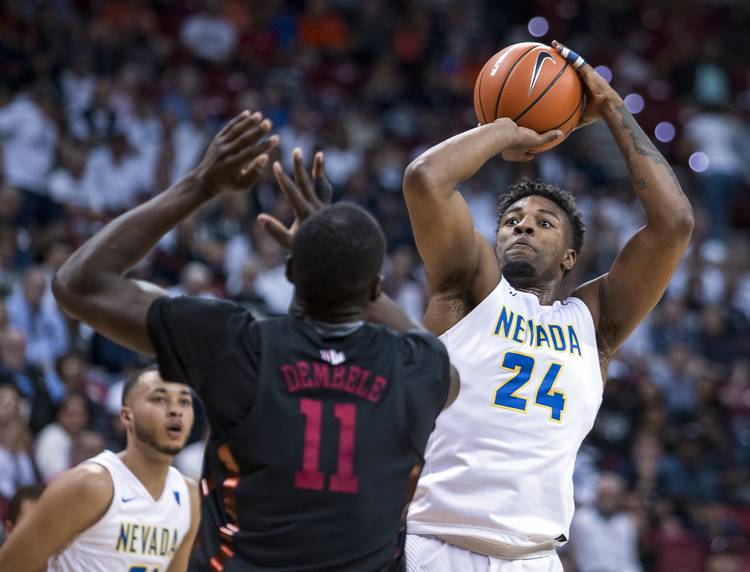 Nevada guard Jordan Caroline (24) sets up for a shot over UNLV forward Cheickna Dembele (11) during the first half of an NCAA college basketball quarterfinals game in the Mountain West Conference tournament Thursday, March 8, 2018, in Las Vegas. (AP Photo/L.E. Baskow)

All this time, you’ve been pronouncing it wrong.

It’s Nev-ADD-uh, not Neh-VAH-duh, according to school officials. And it’s the Wolf Pack, not to be confused with Wolfpack, which is North Carolina State’s mascot.

The NCAA Tournament selection committee had no problems finding the college basketball team from Reno, long known as the “Biggest Little City in the World.” Nevada (27-7) won the Mountain West regular-season title with one of the country’s most high-octane offensive machines.

Seventh-seeded Nevada averages 83.1 points per game, which ranks 18th nationally. By comparison, 10th-seeded Texas averages 71.7 points, which ranks 237th. One will either come crashing down to earth or rise up in a first-round matchup on Friday.

“They’re a great offensive team. We’re not,” Texas coach Shaka Smart said on Monday, pulling no punches in the process. “We’ve been inconsistent on that end. We’ve been better on some nights than others.”

It’s no secret the Longhorns (19-14) can go through severe scoring droughts. Four- and five-minute scoreless streaks were common during conference play. Texas hung in there with defense.

UT allowed 68.2 points per game, the third-best total in the Big 12. Opponents also shot a measly .422, also the third-best figure in the league. Freshman Mo Bamba led the league in rebounding (10.4) and blocks (3.7).

Defense kept the Horns in both games at the Big 12 tournament after two awful starts offensively. Texas missed 16 of 21 3-point shots in the first half but still pulled out a 68-64 win over Iowa State. UT started 0-for-9 from 3-point range against Texas Tech but was within one with 7:55 remaining.

“They have Jordan Caroline playing I guess what some would call the five (center), but he’s not a five. He’s really more like a 4-3 (power forward-small forward),” Smart said. Caroline, a 6-7 junior, is averaging 17.9 points and 8.8 rebounds per game.

“He’s their most, I guess, biggest, strongest guy that’s in their starting lineup, and he’s a perimeter-oriented guy that can also do a lot around the basket,” Smart said. “It makes it a very challenging group to guard.”

Perimeter defense has been a tricky topic for Texas at times this season. Kansas hit 17 treys in Austin. TCU hit double-digit 3-point totals in both games. West Virginia bombed away and hit 12 in a 35-point rout in Morgantown.

Chasing twins: Smart recalled his attempts to land Nevada twins Caleb and Cody Martin, two juniors both listed at 6-7, while he was coaching at Virginia Commonwealth.

“I didn’t do a very good job because I’ll never forget, I went down to see them at their high school, and about a week or two later, they committed to N.C. State,” Smart said.

The twins transferred to Nevada after the 2015-16 season and then sat out one year per NCAA transfer rules.

“I was always impressed by those two guys and I thought their mom had her stuff together,” the coach added. “I always liked the fact those guys were so versatile. They had a humility about them was pretty cool. They knew they were good players, but they didn’t act like they were better than anyone else in their school who didn’t play basketball.”