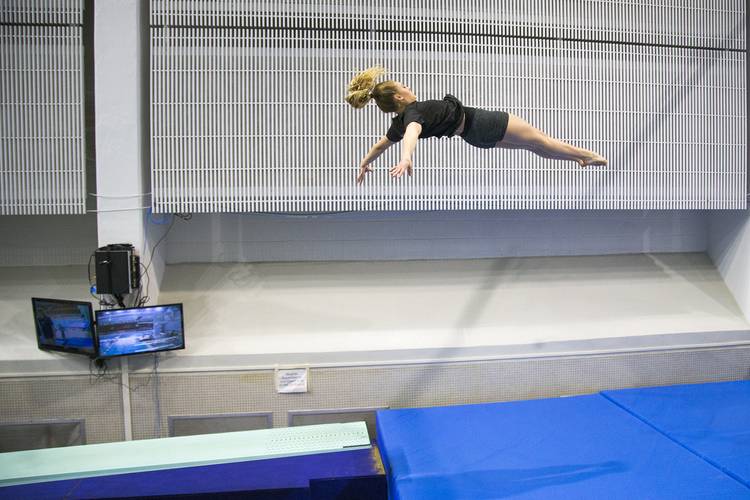 She’s called “Big Al” by a ton of people who hang out on the deck, in the pool or at the diving well at Jamail Texas Swimming Center.

That’s because the best sorts of nicknames are comically ironic. Alison Gibson, a Texas sophomore diver and a defending NCAA champion, is petite. She’s maybe 5 feet, 3 inches tall when she rises on her toes in the seconds before she starts a dive off the one- or three-meter springboard.

Neil Walker, the former Longhorns swimming star and an Olympic gold medalist, tagged Gibson with the moniker long ago.

And it was Gibson’s big, extroverted personality that first caught the attention of UT diving coach Matt Scoggin. That was back when Gibson, who grew up in Austin, was enrolled in the Longhorn Aquatics swim club. She was 7 when she started concentrating on all strokes but freestyle. She had yet to consider diving.

During practices, Gibson routinely would say hello to UT men’s swimming coaches Eddie Reese and Kris Kubik. She would eventually make her way to the diving area to check in with Scoggin, the coach of the Longhorns’ men’s and women’s divers.

Scoggin started watching the way she worked out with a kickboard as she swam laps.

“She always made sure she was ahead of everyone to her right and everyone to her left,” he said. “That never changed. She also was this little kid with such a big personality.”

Eventually, Scoggin asked Gibson about the heights of her family members, wondering if she might have the genetic build to be a great diver. He already had concluded she had the right sort of competitive attitude.

By age 9, Gibson had made the transition from swimming to diving. She was home-schooled and her fluid schedule allowed her to train as a diver. In high school, she switched to a diving club at Texas A&M and would spend at least three days a week in College Station. But she returned to Austin for college. Her father and brother are both UT graduates.

Gibson won three USA junior championships and had qualified for a spot at the FINA world championships in Budapest before she even enrolled at Texas.

But this time a year ago, she unexpectedly became one of the most notable divers in Longhorn history.

Her speciality is the three-meter springboard, although she also likes the one-meter event. She stopped competing on the 10-meter platform after she suffered two concussions.

A year ago, Gibson, who was just 17, barely qualified for the one-meter event at the zone competition for NCAA divers. A week later, she garnered the eighth and final spot at the NCAA championships by less than one point.

Then she enjoyed a perfect sort of performance. She wasn’t sure where she stood in the standings through the six-dive final, conceding that she’s not much of a scoreboard scanner.

Gibson became Texas’ first NCAA diving champion in a decade. She also was the first Longhorn to win the one-meter springboard title since Vera Ilyina did so in 1998. Ilyina was a four-time Russian Olympian and the gold medalist at the 2000 Sydney Games.

Boosted by Gibson’s title, the Longhorns finished fifth as a team at the national meet, their best placement since 2009.

Gibson then capped a busy diving season by competing in Hungary, followed by the World University Games in Taipei.

UT is ranked fourth headed into this year’s NCAA meet, which starts Wednesday in Columbus, Ohio. Stanford is the decided favorite, with California and Texas A&M ranked second and third.

Earlier this month, Gibson easily qualified for both springboard events. She’ll begin competition Thursday, but unlike a year ago, “Big Al” will be well known.