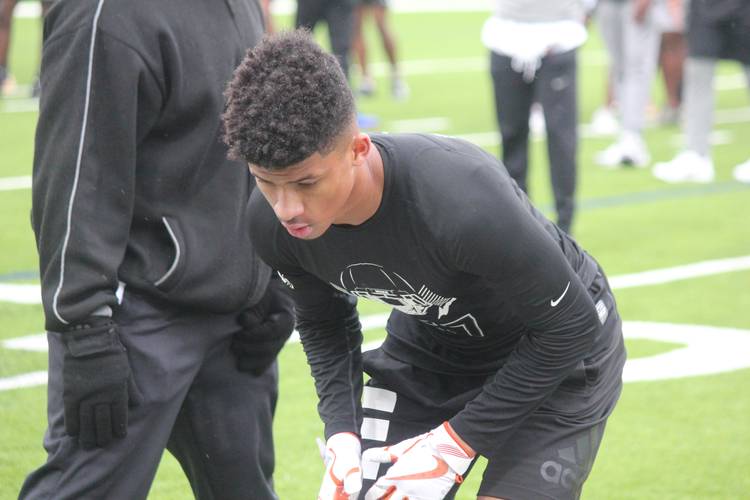 Analysis: Johnson possesses an NFL frame and the athleticism to become a dominant force and an anchor at left tackle. He’s surprisingly quick for a player his size and does a good job staying balanced against edge rushers. He possesses quick hands and good footwork for a prep prospect. He was a first-team all-district selection as a junior after earning second-team honors his sophomore season. Texas is in great shape for Johnson after signing his teammate Joseph Ossai in the 2018 class.

Analysis: Beason recently made a surprise commitment to Illinois; the Fighting Illini are building a solid pipeline at Bishop Dunne after signing 2018 Fabulous 55 member Calvin Avery. The familiarity with the staff must have played a factor. Beason fancies himself a two-way player despite spending most of his time at the prep level at wide receiver. He accounted for 15 touchdowns and more than 1,000 yards on offense as a junior.

Analysis: Big pass rushers with the ability to disrupt the quarterback and handle double-teams in the run game are a rarity. Stripling fits the bill and his offer list reflects the importance college coaches place on the position. He’s the top-rated defensive end in the state for the 2019 cycle and emerged on the scene after recording 18 sacks and four forced fumbles as a sophomore. He put on a show at The Opening regional in Houston.

Analysis: Banks is the No. 1-rated cornerback on the Fab 55 because of his coverage ability. He’s the most consistent cover corner in the state and is a top priority for the Texas staff. LSU is also firmly in the mix because of Banks’ ties to the Louisiana area. Texas signed his teammate, tight end Malcolm Epps, in the 2018 class and his relationship with assistant coach Jason Washington goes back two seasons. Banks has earned an invitation to The Opening Final in Frisco this summer.

Analysis: Curry made headlines in October of his junior season when he set a state record with 26 receptions in a regular-season game. He played at Stafford as a sophomore, earning second-team all-district honors. Curry put up prolific numbers his junior season, catching 121 passes for 1,570 yards and 18 touchdowns. His quarterback is fellow Fab 55 member and former Texas A&M commit Grant Gunnell.