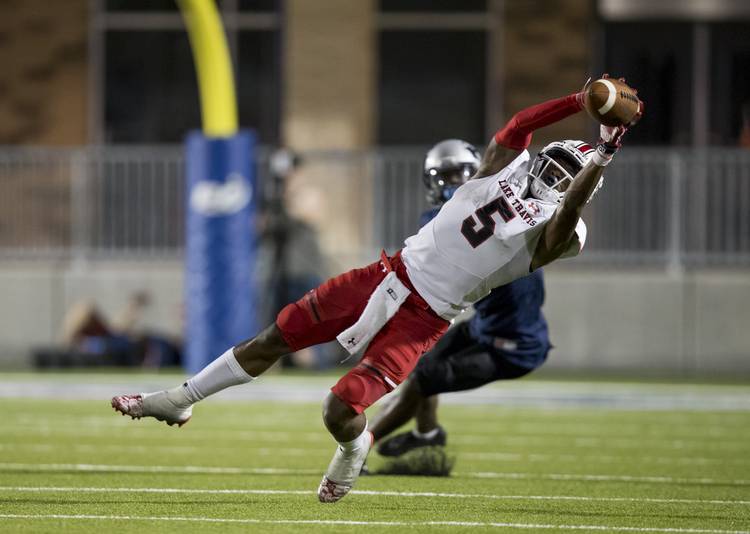 Lake Travis wide receiver Garrett Wilson is the No. 1 player on the 2019 Fab 55. (John Gutierrez/For American-Statesman)

Texas closed on its top target of the 2019 class on Saturday when 5-star wide receiver Jordan Whittington pledged to the Longhorns over Texas A&M, Florida and UCLA. It was the first true recruiting win for Tom Herman against Jimbo Fisher on even playing field and let the state, and country, know that the Longhorns plan on duplicating the success of the 2018 class.

Herman’s program now holds three commitments for 2019, each one a member of the Fabulous 55. Whittington joined 4-star dual-threat quarterback Roschon Johnson of Port Neches-Groves and 3-star defensive end T’Vondre Sweat of Huntsville. More commitments are expected to follow in the months of March and April since the 2019 class can start taking official visits in the spring.

The Longhorns want to sign at least 20 players and plenty of spots remain. Here are 10 in-state targets Texas would like to secure before national signing day. Texas has offered each one and is in good position with all 10.

With Whittington seemingly in the bag, the attention of the wide receiver room turns toward local wide receivers and Wilson is the best from the Austin area since Austin High produced current NFL player Zay Jones. Wilson is an explosive receiver with impressive prep numbers and state championship pedigree. Texas can’t lose a talent of his magnitude that close to Austin and Wilson is aware of his importance to the coaching staff.

Offensive line will always be an important position to recruit, and the state is home to a trio of excellent tackle options. Johnson is one of the three and a long-time priority for the staff. He was a teammate of 2018 signee Joseph Ossai and it’d be an upset if Johnson ended up committing to any school other than Texas. Johnson was close with Derek Warehime and is building a relationship with new offensive line coach Herb Hand.

Herman has yet to sign a true center prospect at Texas and he hopes that ends in 2019 with Bragg, the best center the state has produced in multiple cycles. Bragg is a huge prep center with refined technique and an understanding of how to run an offensive line. He’s smart enough to quickly pick up a college offense, highlighted by his offer from Stanford. The Cardinal appear to be Texas’ lone competition for him.

Green was considered a slam dunk to Texas A&M a month ago as Fisher began to build recruiting momentum. But that has stalled somewhat in College Station over the last month and Texas is making a real push for the 5-star tackle. His relationship with Whittington can only help the Longhorns and their track record recruiting the Houston area shouldn’t be ignored. Green was a one-time commitment to LSU, but it looks like it’ll be an in-state battle between Texas and Texas A&M up until he signs a national letter of intent.

If Wilson is the top priority at wide receiver, Higgins is a close second. He brings a different set of skills to the field because of his size. Wilson and Whittington rely more on speed and technique; Higgins is a physical mismatch with the frame to become a dominant outside receiver or even an H-Back with the ability to flex out depending on how big he gets between now and when he enrolls in college. Texas is the clear favorite to land him.

Texas received a commitment from its top offensive target on the board. Leal is the top defensive target. Whittington and Leal are both South Texas natives and that should only help the Longhorns sign their most important defensive line prospect in the 2019 cycle. Leal is the ideal defensive lineman for a Todd Orlando defensive front because he’s big enough to hold the point of attack like Chris Nelson and athletic enough to play on the outside like Charles Omenihu or Malcolm Roach.

There is a shortage of elite linebackers in Texas. The Longhorns signed only one in-state player at the position in 2018 and the only 2019 in-state middle linebacker to hold a UT offer is Gbenda. His stock rose after a strong performance at The Opening regional and he’s nearly doubled his offers since then. Gbenda is a big, athletic linebacker who isn’t afraid of contact and also can run sideline-to-sideline and plan in space. Modern day middle linebackers must be athletic and Gbenda moves well for a big linebacker.

LSU and Texas are set to do battle for Banks, the state’s top-rated cover cornerback. The Longhorns are in it because of their long-standing relationship with Banks. His teammate, tight end Malcolm Epps, signed with the Longhorns in December and is focusing on landing Banks for Texas. LSU might hold the advantage because of family connections. Banks, like many young Houstonians, has roots in south Louisiana. Expect the two programs to compete for Banks up until signing day.

Catalon doesn’t let his size hurt his ability to make plays on the field. He’s incredibly productive for a safety, racking up more than 100 tackles as a sophomore and junior while also helping on the offensive side of the ball. He’ll be a safety or a nickel cornerback in college and those are needed in the Big 12. Catalon plays bigger than his size would suggest and he’s an unbelievable athlete and competitor. He’s also a talented returner. It’ll be interesting to see if Texas struggles to clinch safeties in the 2019 class because of the amount of defensive back talent the Longhorns signed in February.

Young is considered a cornerback by most recruiting services, but his upside is at safety. He’s a big-bodied defensive back with coverage skills. His physicality will transfer to the safety position, as will his ability to cover wide receivers in 1-on-1 situations. Young is used to playing in space with experience at cornerback and can make a natural transition to strong safety where he can concentrate on stopping the run, helping corners and covering tight ends and running backs.