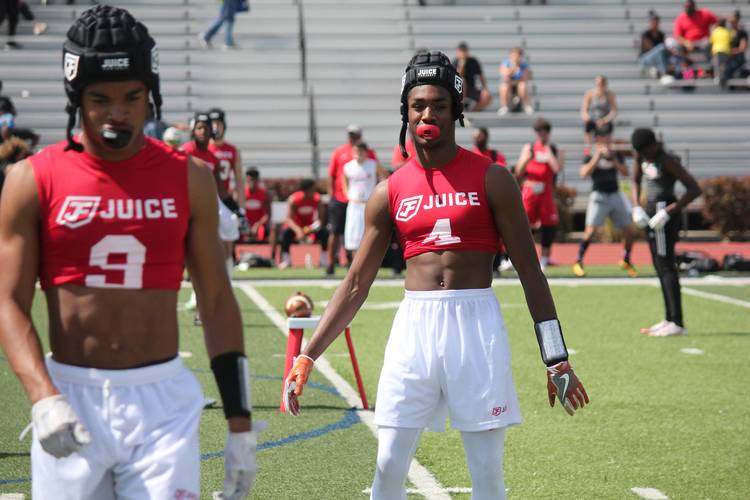 Texas offer would be ‘dream’ for Jaylen Ellis

Another local receiver wants the option to join the Longhorns. Round Rock Cedar Ridge 3-star Jaylen Ellis took his skills to Dallas for the Elite32 7-on-7 Tournament with a team named Juice 512, which included many prospects from the Round Rock and Austin area. Ellis isn’t shy about his fondness of Texas despite being committed to Baylor.

“I’m hoping to get the Texas offer. I’m still waiting on that, but they were up front at the junior day and told me to be patient with an offer,” Ellis said. “I talk to Texas a couple of times a week. I’m not in a rush or need them to hurry to make an offer. I understand the process.”

The 6-foot, 180-pound speedster is a Fabulous 55 member and one of a trio of local prospects vying for the title as state’s top receiver. Ellis was a first-team all-district selection as a junior, recording 56 catches for 1,248 yards and 14 touchdowns. He caught seven touchdowns as a sophomore.

“Being from Austin, it is safe to say Texas is a dream offer. My family is around the corner all over the city,” Ellis explained. “That’s a drive I could make every day I wanted to and the Austin guys like Garrett, Elijah and I talk on the phone and stay connected.”

Ellis wasn’t the only Austin-area wide receiver to impress over the weekend at the Elite 32 Tournament. Round Rock sophomore Collin Sullivan continues to make a name for himself because of his combination of length, strength and athleticism. He’s approaching 6-2 and is still growing. He holds offers from Oregon, Houston and SMU.

“Austin is slept on when it comes to talent. People don’t think of us like Houston or Dallas, but we have a lot of good players and we’re hoping to get our name out there,” Sullivan said. “I can learn a lot from guys like Jaylen Ellis because I see him go through the recruiting process and can pick his brain about stuff. We’re all real close.”

Sullivan plans to visit Northwestern, Oklahoma and Oklahoma State in the spring and Notre Dame in the summer. The major offer would come from the Longhorns. Sullivan moved to Texas from Maryland in elementary school and now fully considers himself a Texan.

“I’m not worried about not getting a Texas offer early because that is their process. It took a while for Elijah (Higgins) and Garrett (Wilson) to pick up offers. It’s all about patience and understanding how each program operates,” Sullivan said. “My first gift when I moved to Texas was a Longhorns jersey, so it is a school that is special to me.”

Sullivan said Texas would be a top school for him if or when an offer came his way during the recruiting process.

12 Big things about Big 12 basketball: What to expect this week, month and moving forward