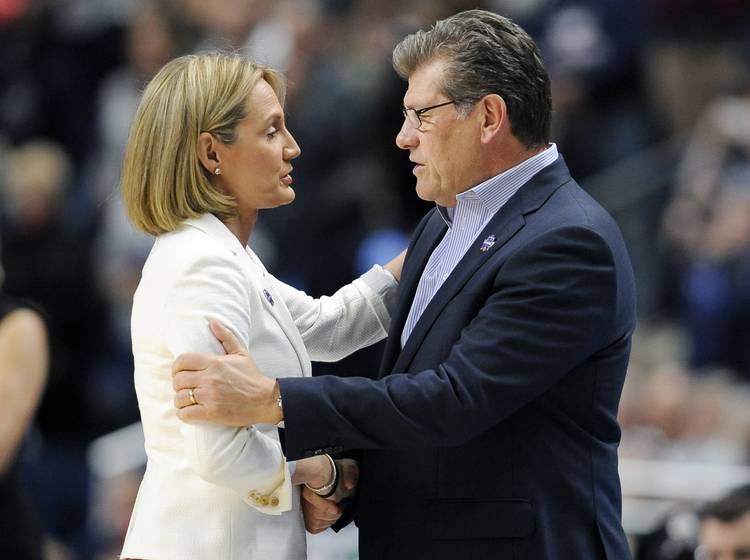 During the past five seasons, Karen Aston’s basketball team has been a model of excellence, a consistent winner and an NCAA Tournament fixture.

The Longhorns are 128-43 over that span and have been to the NCAAs all five years. That includes one trip to the Elite Eight and three others to the Sweet 16.

But does that make Texas an elite team in women’s college basketball?

The answer depends on your own definition of elite. Connecticut is the gold standard of the women’s game, having won 10 NCAA championships since 2000. If continued success over a long period of time — measured partly by trips to the Final Four — equates to elite status, you also must include Notre Dame, Stanford, Tennessee and Big 12 heavyweight Baylor.

“I have a hard time saying that we’re not (elite),” Aston said after a 93-87 loss to Baylor last month at the Erwin Center “We’ve gotten beat by really good teams. I don’t know what you define as elite. I think we’re an elite team. Maybe I’m missing something.”

Aston is the first to admit her team’s trophy case needs more hardware. Before every home game this season, a short film about the Longhorns began with images of the undefeated Texas team that won the NCAA championship in 1986. Since that historic season, the Longhorns have been to only one other Final Four, that coming in 2003.

This season offers another chance at basking in the national attention that comes with a Final Four berth. The first step toward one comes Saturday when second-seeded Texas will play host to 15th-seeded Maine at the Erwin Center. Also joining in the fun this weekend in Austin will be seventh-seeded seed Arizona State and Nebraska, a 10th seed.

The survivor will advance to play in the Kansas City, Mo., regional next weekend.

“Texas is elite by resources, administrative commitment and history,” Antonelli said. “Baylor has been the elite team in the Big 12 because they have won eight conference titles in a row and continue to challenge for a national championship. … Texas would be considered elite on the national scene because they are a team that will compete each year for a national championship and is a top-10 program.”

Big 12 coaches were split when asked whether Texas qualifies as an elite in the women’s game. While some said Texas already has reached that level, others said the Longhorns needed more milestone victories.

“I honestly think Baylor and Texas have a legitimate chance (to reach the Final Four),” Fennelly said. “I think Baylor had a really good chance (to win the national championship) if Kristy Wallace (who suffered a knee injury month) were healthy, but I think Texas and Baylor are honestly Final Four-caliber teams. I really believe that.”

“There is another layer of teams out there — certainly Texas is in that category — of teams that are on the cusp of being (elite),” he said.

Mittie saidUConn, South Carolina, Notre Dame, Stanford and Baylor — teams that have been to the Final Four multiple times in recent years — are on his elite list.

“Right now Mississippi State has gone on an incredible run,” he added, speaking about a Bulldogs team that reached the NCAA championship game last season and earned a No. 1 seed for the 2018 tournament.

Speaking of Mississippi State, UT’s path to the Final Four might include the Bulldogs, who also could be headed to Kansas City.

Baylor coach Kim Mulkey said she was fueled by frustration after Louisiana Tech did not offer her a five-year contract as the school’s head women’s coach in 2000. Mulkey was an All-America point guard for the Lady Techsters and spent 15 years as an assistant coach and associate head coach under Leon Barmore before departing for Waco.

Hired by Baylor in 2000, Mulkey won the first of her two NCAA championships with the Lady Bears in 2005.

“It wasn’t like I was beating the door down to get the job (at Baylor),” she said.

Mulkey also offered some candid comments about the challenge of becoming an elite team in women’s basketball.