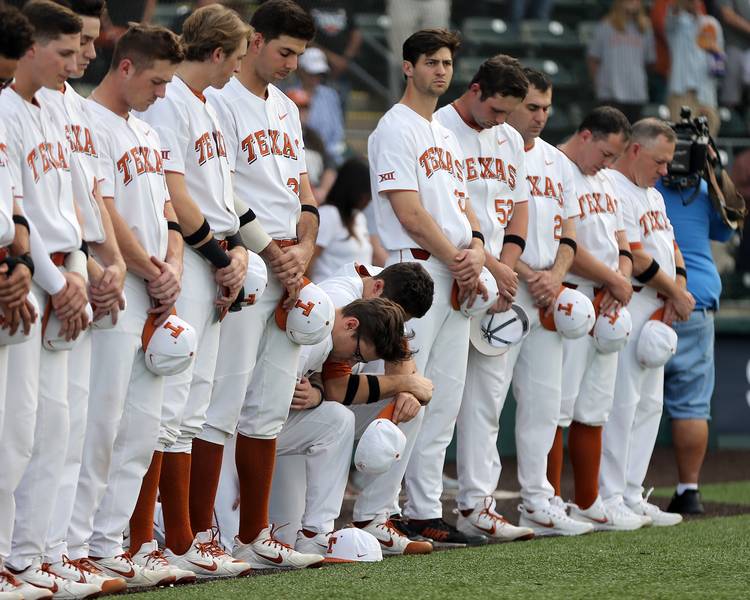 The Longhorns wore black bands on their arms and Garrido’s initials and No. 16 decorated the bases, the home team’s helmets and the Longhorn logo in  center field at UFCU Disch-Falk Field. Beyond the left field fence, fans draped a sign with “Augie” written  in burnt-orange. A moment of silence to honor the winningest coach in college baseball history was held before Texas and Kansas took the field.

The Longhorns then went out and found the most appropriate way to honor Garrido, who passed away Thursday: They won.

Texas put together its best offensive performance of the season, producing 16 hits in a 14-4 win to open Big 12 play. The game was played one day after Garrido, who won two of his five national titles while coaching at Texas from 1997-2016, passed away in California. He was 79.

“He was on our minds for sure,” said Jake McKenzie, the only senior on UT’s roster. “We know how great he is. He’s a legend. He’s taught a bunch of us a lot of things, so it was cool to win it for him.”

Texas (10-9) couldn’t have picked a better time for a 10-run rout. The Longhorns were hosting their conference opener against a Kansas team that had won four straight games. Texas, meanwhile, had lost five straight to Stanford and Arkansas, the No. 3 and No. 5 teams in D1Baseball’s poll, by a combined score of 47-14.

The Longhorns never trailed on Friday. Thanks to three RBI singles, Texas grabbed a 3-0 lead by the end of the third inning. Kansas (12-5) responded with a two-run home run in the fourth, but Texas left the Jayhawks behind by using Garrido’s small-ball philosophy.

Leadoff single for @tatershaw22 and @JakeMcK13 follows with a sac bunt.

After Tate Shaw led off the fourth with a single, he was bunted over to second base by McKenzie. Shaw later crossed home plate on a disputed wild pitch before Texas scored on three additional hits and a passed ball in the five-run frame.

Texas coach David Pierce said he intended to call for a sacrifice bunt the first chance he got and “that was a tribute back to Coach.” That opportunity presented itself in the form of Shaw and McKenzie, who both walked onto UT’s team in 2015. The plan went off with only one hitch: McKenzie said he showed his bunt late, which went against Garrido’s desire for hitters to state their intentions early.

“It was definitely a throwback because obviously we don’t do that much bunting here anymore,” Shaw said. “It was great to look back at it.”

Texas’ 16 hits were the team’s most since it had 17 in last May’s 11-inning loss at TCU. On only one occasion this season — a 16-3 blowout of Northwestern on March 3 — has UT exceeded the 14 runs it scored on Friday.

The win gives UT a 1-0 start in Big 12 play. Before the season, Texas was picked to finish third in the conference standings.

“We’re just getting started, so it’s going to be nice,” Shaw said.

Around the bases: Nolan Kingham, a junior right-hander, improved to 3-2 after he allowed 10 hits and four runs over a 97-pitch complete game. Roughed up in two of his previous three starts, Kingham retired the first nine batters he faced on Friday. … Texas shortstop David Hamilton (thumb) did not start but did score as a pinch-runner. … Texas turned three double plays against Kansas. UT also got out of a jam when Kingham struck out a batter and catcher DJ Petrinsky subsequently caught a runner trying to steal. …  UT scored on three wild pitches and a passed ball.