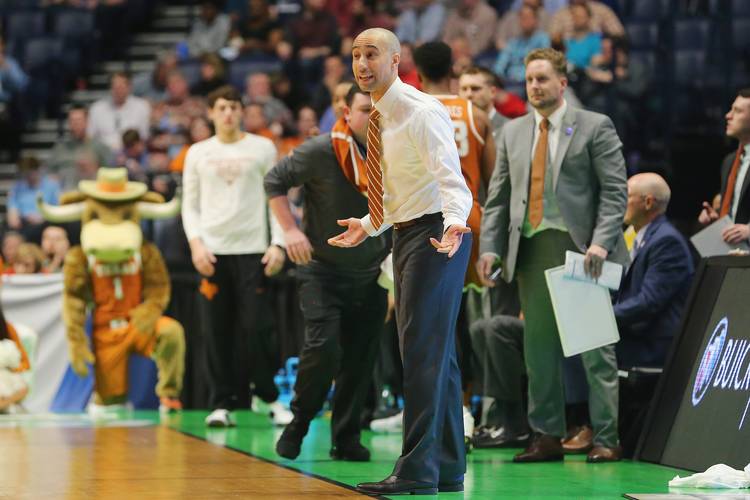 Head coach Shaka Smart of the Texas Longhorns directs his team during the game in the first round of the 2018 NCAA Men's Basketball Tournament at Bridgestone Arena on March 16, 2018 in Nashville, Tennessee. (Photo by Frederick Breedon/Getty Images)

“It’s hard to describe how I feel right now just beyond that word,” Smart said. “I think I’ll probably go back to the hotel and it’ll hit me. It’s been a lot this year. We tried to hang in there, we tried to focus on the guys around us. I think we’ve done a pretty good job of that, but at the same time, we’ve taken some punches.

“Today was definitely a gut punch.”

This has been one of the most emotional seasons in recent Texas basketball history.

Guard Andrew Jones was diagnosed with leukemia. For all the excitement surrounding Bamba, he missed three games down the stretch — and UT won two of those anyway in exciting fashion. Guard Eric Davis Jr. was tied to a FBI investigation into college basketball corruption. Along the way, the Horns played in a school-record eight overtime games, going 3-5 in them.

Smart is now 50-50 in his three seasons with the Longhorns. Athletic director Chris Del Conte praised him while in Nashville, saying the coach had been dealt a tough hand this season.

“I think we took a big step this year, but obviously we have a long way to go to where we want to be,” Smart said. “We want to be winning games like today and moving onto games like Sunday, going on to the next weekend.

“We were a long, long way away from that last year,” Smart continued. “It doesn’t feel that way right now in this second, but we were close. We were close to that this year. We can pick out a handful of plays, and maybe our seed is different. Maybe today goes different. Obviously we could’ve won today, but we didn’t.”

Mo was ready to go: Bamba answered all questions about his health in one sequence in the first half. He used every bit of his 7-9 wingspan to block Hallice Cook’s shot. The entire crowd had its socks knocked off.

Then Bamba ran the floor and threw down a vicious two-handed dunk. From defense to offense, he created a tailor-made moment for NBA scouts to devour.

Bamba didn’t get as many low-post touches in the first half as he’d probably like, though. He logged 16 minutes before the break and had only four points on 2-of-4 shooting along with five rebounds.

The streak continues: Texas fell short of its first win in the NCAAs since a 2014 victory over Arizona State, one where Cam Ridley scooped up a loose ball and scored just before the buzzer. The school now sports a 35-37 all-time record in the tournament.

Texas is one of eight Division I schools to appear in 18 of the last 20 tournaments. The school has made 26 appearances in the last 30 years.

Full support: The Longhorns didn’t have many fans in Nashville. The one or two UT fans wearing burnt orange stuck out in each section inside Bridgestone Arena. But Texas had plenty radiating online back home.

“I’ve been so impressed with the #TexasFight shown by @TexasMBB in the face of adversity this season,” baseball coach David Pierce tweeted. “Go get ‘em, Horns. Can’t wait to see what y’all can do. Hook ‘Em!”