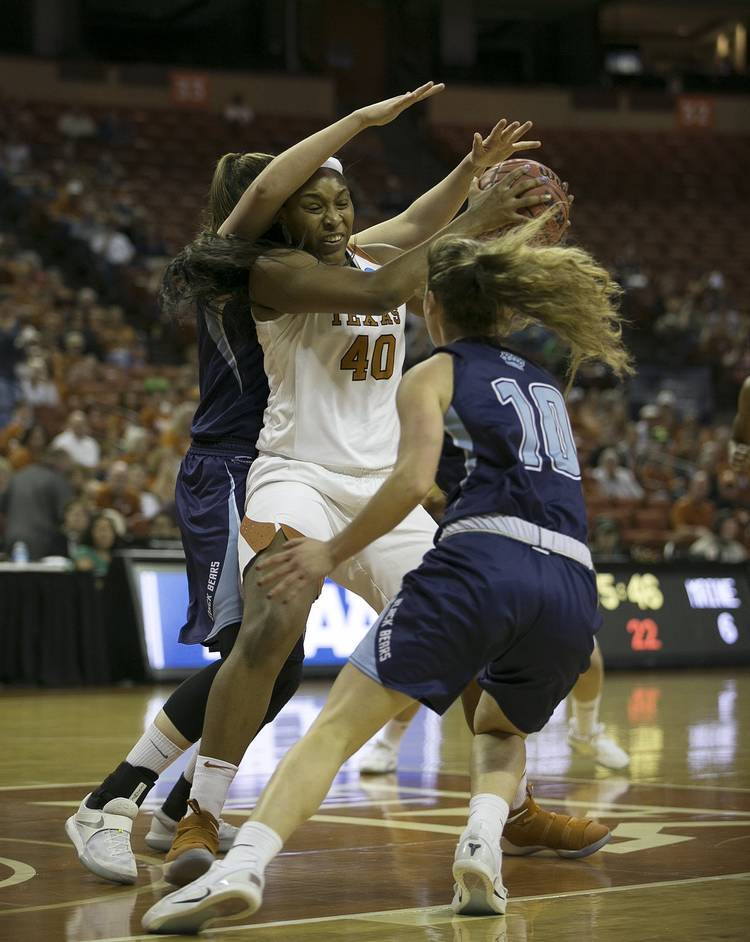 Jatarie White led the Longhorns in scoring in an 83-54 victory over Maine on Saturday. Photo for American-Statesman by Deborah Cannon

Texas sharpened its claws for the NCAA basketball tournament by playing in the Big 12, traditionally one of the toughest conferences in the nation.

The Longhorns had the 17th toughest schedule (out of 349) teams in the nation. They played Baylor three times. They have played heavyweights such as UConn, Tennessee, Florida State and and Georgia.

Playing against top competition all season probably helped No. 8 Texas defeat Maine 83-54 in the first round of the women’s tournament Saturday at the Erwin Center.

Texas had a balanced offense, but its dominance was shown on the final stat sheet. The Longhorns, ranked fourth in the nation in rebounding, had a 43-12 edge under the boards against a team whose tallest starter was only 6-1.

“Every year we’ve gotten much better at just trying to to treat every game the same,” Aston said. “I know you get tired of hearing that from our players but they really have tried to live that this year, and I think it’s helped them in the good times and in the bad.”

Texas (27-6) advances to play Arizona State (22-12) in a second-round game at 8 p.m. Monday. The winner will go to the Sweet 16 round beginning Friday night in Kansas City.

Maine (23-10) watched its slim hopes of upsetting the Longhorns evaporate by poor shooting and its weakness in the paint. While Texas shot a season-high 61.8 percent from the field, the Black Bears finished at 36.4, hitting just 3 of 19 shots behind the three-point line.

In the locker room, Aston wrote a single word on the message board — Rebound!. Apparently the players took it to heart. When the Longhorns took a 45-18 lead at halftime, they also owned a 25-4 rebounding edge. Center Jatarie White and Joyner Holmes grinded for boards and set up fast-break opportunities for their guards

It won’t be as easy Monday against Arizona State, which advanced with a 73-62 victory over Nebraska in Saturday’s matinee.

“That’s definitely going to be our mindset in the next game,” said guard Lashann Higgs, who scored 15 points while hitting on 6 of her 7 shots from the field. “We have to have respect for all the teams that have won. Arizona State is a very physical team.”

Maine coach Amy Vachon applauded her team’s hustle, but knew the players had justr been overmatched by UT’s size and versatility.

“For our kids, this is something they’ve always watched on television,” she said. “For our university, we hadn’t been here since 2004. We’ve talked a lot about it, but until you experience it,  you don’t really know what to expect.”

As for Arizona State, Texas has a 4-0 all-time series record against the Sun Devils (22-12). This is ASU’s 16th appearance in the NCAAs, its 13th under coach Charli Turner Thorne. Thorne said it will be a challenge to play on UT’s home court Monday.

“Well, we’re going to have to rebound,” Thorne said. “That and transition defense. From what I know about Texas — the little bit I watched this past week — those are probably the two biggest keys. Obviously, they’re a very good defensive team as well. I’m hoping we can get this game under belt and we’ll be a little more efficient offensively on Monday.”

Business as usual for Texas pitchers as Longhorns blank Kansas