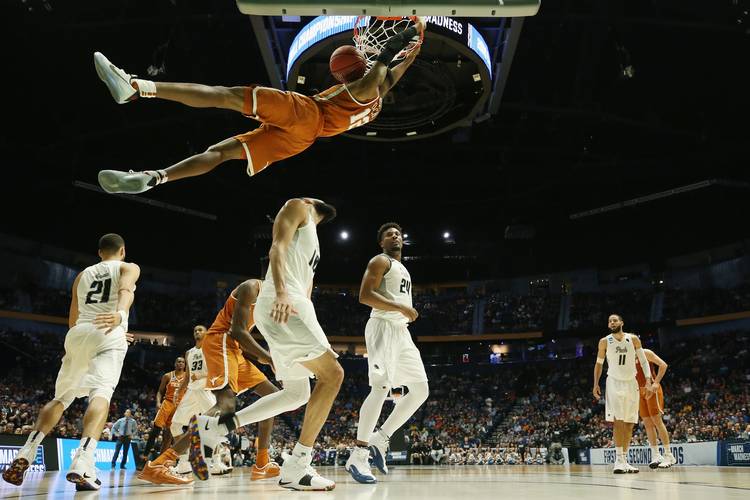 Kerwin Roach II #12 of the Texas Longhorns dunks the ball against the Nevada Wolf Pack during the game in the first round of the 2018 NCAA Men's Basketball Tournament at Bridgestone Arena on March 16, 2018 in Nashville, Tennessee. (Photo by Andy Lyons/Getty Images) ***BESTPIX***

In all reality, Friday’s 87-83 loss to Nevada wasn’t that surprising. Not for those who have been watching the Texas men’s basketball team all season.

Snippets from the entire year were on full display over 45 minutes at Bridgestone Arena.

This team could play some terrific basketball at times, as evidenced by a 14-point, second-half lead. Mo Bamba showed why he’s a future NBA lottery pick. Kerwin Roach II and Matt Coleman proved they are two vital cornerstones of the program moving forward.

“We fought every game,” Roach said. “We have a young team. These guys, they’ll do anything. I’ll take them to war with me any day. Our effort is never questionable.”

This team absolutely fought every night out. But the Horns also melted down at times, too.

A second-half scoring drought helped Nevada climb back into the game with steady diet of 3-pointers. Texas, the worst 3-point shooting team in the Big 12, couldn’t balance those out with its own.

Free throws, a season-long bugaboo, were a problem late. When things went into overtime — UT’s school-record eighth OT game this season — the pressure only intensified for a team capable of losing by 35 points at West Virginia or beating that same bunch at home by eight.

Texas was 3-5 in overtime games this season. The average margin of defeat in those five losses was 3.8 points.

“Off the top of my head, a simple answer to your question is, in a game like (Friday), we need to add, you know, one or two more winning plays,” UT coach Shaka Smart said. “That’s the difference. One more stop, one more rebound.

“It’s a cruel, you know, hard assessment,” he added. “But, you know, in games like this that go in overtime, and we’ve been in as many as anyone in the country, one play does make the difference.”

Make no mistake, Smart had to deal with some incredible obstacles this season. Guard Andrew Jones was diagnosed with leukemia in early January. For several days, coaches and players thought he might die. Jones pulled through and is now on the road to recovery.

Some players believe Jones might return next season. No coach or administrator is predicting that as it’s too unknown at this point.

Bamba missed three key games late with a sprained toe injury. Texas went 2-1 without the big guy and likely clinched a spot in the NCAAs.

The school also had to bench Eric Davis Jr., who is alleged to have accepted $1,500 from a sports agent. UT sources have indicated Davis may never play at Texas again, although no decision has been finalized.

Still, Smart knows he is expected to compete for Big 12 titles and advance in the NCAA Tournament. Despite all the road blocks, inconsistent offense and freshmen-heavy lineup, Texas made it back to the postseason before finishing with a 19-15 record.

Getting to the postseason this year and in this fashion was a huge success for a program that didn’t make it last year. Texas had not missed the NCAAs in back-to-back years since 1987 and ’88.

Smart is 50-50 in three seasons at UT. His best season so far was his first, when UT went 20-13 and the Longhorns reached the NCAAs with mostly former coach Rick Barnes’ players. Last season, Smart’s team was 11-22 and finished last in the Big 12.

“We can’t dwell on could-have. We’ve got to find a way to make it happen,” Smart said. “In terms of message to the fans, we’re going to work harder than ever. We’re going to breathe a ton of life into a lot of young guys that have a chance to take a big jump for our team.”

Smart will proceed without Bamba, who is projected to be a top-five pick in this summer’s NBA draft. Roach is also likely to test the NBA waters and get feedback on his draft status. That’s exactly what Jones did last season before choosing to return.

The bulk of the roster is projected to return, including Sims, Jacob Young and Dylan Osetkowski. Texas will add four incoming recruits, including ready-to-go big men like the 6-9 Kamaka Hepa and 6-11 Jaxson Hayes.

The recruiting class ranks eighth nationally, according to 247Sports. It’s the third straight year Smart has pieced together a top-10 class.

Texas has enjoyed the services of two first-round draft picks (Jarrett Allen and, eventually, Bamba) and had back-to-back top-10 recruiting classes the last two years. And the program has no NCAA Tournament wins to show for it.

Smart was proud of his team’s effort to battle through adversity and reach the NCAAs this year. But he also knows much more is expected — from both inside the program and out.

“There’s a lot of times this year where we got hit with situations where they could’ve felt sorry for themselves or splintered apart,” Smart said. “They really didn’t do that all year.

“Now, were there games or plays where we needed to be better, where we needed to fight even harder or counteract what the other team was doing? Yes,” Smart continued. “I do know there’s a lot of guys in that locker room that can take a lot of lessons from this season and can grow fro them and get better.”