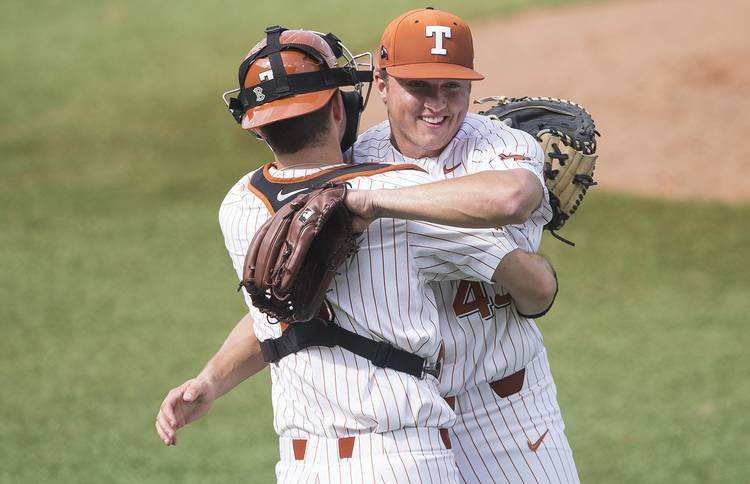 Texas pitcher Andy McGuire (43) and catcher DJ Petrinsky (6) celebrate the final out of a 5-4 win over Kansas in Austin on March 18, 2018. NICK WAGNER / AMERICAN-STATESMAN

On Sunday afternoon at UFCU Disch-Falk Field, Texas sweated out a sweep.

Texas built an early lead and then fended off Kansas in a 5-4 victory. The conquest came on the heels of this weekend’s 14-4 and 4-0 wins over the Jayhawks, the first Big 12 foe on UT’s 2018 schedule.

“Starting off with a sweep is huge for our guys,” junior Andy McGuire said. “If we had any doubters before, hopefully this is a nice little way to show that we mean business and we’re going to keep grinding.”

Texas (12-9) built a 5-0 lead by Sunday’s fifth frame, but Kansas (12-7) slowly chipped away. Kansas chased UT starter Chase Shugart from a 5-2 game in the sixth session. That left the bullpen to escape several jams.

Josh Sawyer gave up a run-scoring fielder’s choice, and Beau Ridgeway hit a batter with the bases loaded. Both relievers, however, made sure that things didn’t get worse. Sawyer stranded a runner at second base with a seventh-inning strikeout. To end the eighth inning, Ridgeway got a bases-loaded fly ball.

In the ninth inning, Texas coach David Pierce opted for McGuire over Ridgeway, who was coming off a two-inning save against Kansas. Pierce later told reporters he wanted to use McGuire’s slider against a Kansas team that had been hitting the fastball well.

McGuire hit a batter, but the right-hander retired the other three Jayhawks he faced. With the scoreless outing, McGuire earned the first save of his career.

“That was awesome to see,” junior Masen Hibbeler said. “We needed some guys to step up out of the bullpen and that’s exactly what they did.”

After two seasons years at Texas — one of which saw him make 19 starts at third base — McGuire transferred to USC Aiken in 2016. He quickly returned to Austin but still sat out that season. He then didn’t make the roster the following spring.

This season, he’s made six appearances out of the bullpen and logged five at-bats.

“It wasn’t great sometimes thinking about what am I going to do if I never get a chance to play again,” McGuire said. “But also, having the opportunity Coach Pierce has given me, I can’t be anymore grateful. I’m trying to make the most of it.”

The first homer of @masenhibbeler's Texas career got outta here in a hurry. #HookEm 🤘 pic.twitter.com/mOKbAFZfhp

Filling in for the injured David Hamilton at shortstop, Hibbeler opened the game with three straight defensive assists. Hibbeler then homered off the first pitch thrown by Jayhawk starter Ryan Zeferjahn.

The homer was the first at Texas for Hibbeler, who spent his last two seasons at Odessa College. Seven pitches later — after Duke Ellis drew a walk — junior Kody Clemens hit his 16th home run with the Longhorns.

The multi-homer inning was UT’s first since Tres Barrera and Kacy Clemens accomplished the feat against Baylor on May 26, 2016.

Around the bases: Shugart earned his first win of the season. Shugart carried a one-hitter into the sixth inning but ended up allowing five hits and three runs. … Clemens established a career-high with his sixth homer of the season. … Five of Kansas’ eight hits were doubles. … Texas will next host Sam Houston State on Tuesday.