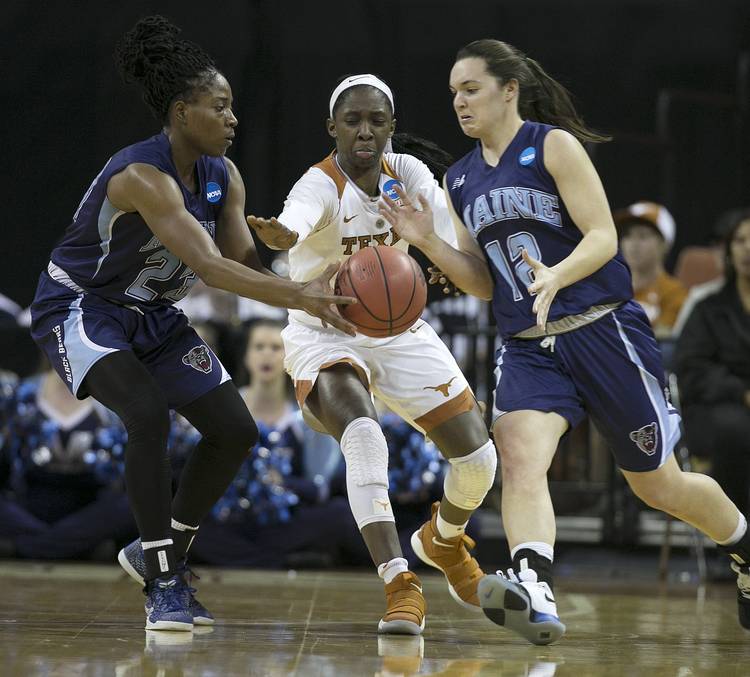 Texas's Lashann Higgs puts pressure on Maine's Lashann Higgs, left, and Jada Underwood during the second half of the first round of the Women's NCAA playoffs in Austin, Tx., Saturday, March 17, 2018. For AMERICAN STATESMAN / DEBORAH CANNON

When it comes to the NCAA women’s basketball tournament, it’s better to have some fans screaming for one team than having no one in the bleachers at all.

That’s what the NCAA determined four years ago when it established a new format for the 64-team tournament. The top 16 teams in the field would all play at home for first- and second-round games.

So when No. 2 seeded Texas (27-6) plays host to No. 7 seed Arizona State (22-12) Monday night, the home team has an obvious edge. While that might not be fair for visiting teams across the country that have to play before partisan crowds, both Arizona State coach Charli Turner Thorne and UT’s Karen Aston agreed it’s best for the sport.

“When you look at the big picture, we want our tournament to draw fans,” said Turner Thorne, who is in her 21st season at Arizona State.

“We want people in the stands. We want a good atmosphere for the student-athlete, for everybody, for television. We want to be good television. So I get it. I understand.”

Before the format change, too many NCAA tournament games were played before empty seats which was not exactly a good TV visual.

Playing at home does not guarantee a Texas victory, of course. Yet the first three days of the tournament have proven there is no place like home.

Through Sunday afternoon, tournament teams playing on their home environment were 19-1. The lone difference came when No. 6 seed Oregon State defeated No. 3 seed Tennessee 66-59 Sunday in Knoxville.

In 2015, the first year the NCAA gave top-seeded teams a home setting, Texas traveled to Berkeley, Calif. Seniors Brooke McCarty Ariel Atkins remember the outcome, a hard-fought 73-70 victory over Cal that sent the Longhorns to the Sweet 16. McCarty and Atkins, freshmen on that team, combined for 22 points in the victory.

“That was definitely a challenge,” Atkins recalled. “At first you don’t think about it, but once you get to playing, you know you have to get sleep and wake up the next day. It’s definitely a blessing to play at home in the first round.”

Atkins should know. In her final three years as a student-athlete, Texas has been at home each year. Heading into the Arizona State game, the Longhorns are 5-0 at the Erwin Center during that span. That included Monday’s 83-54 victory over Maine in a first-round game.

After escaping with an 84-80 victory over North Carolina State last year, it’s doubtful the Longhorns will take the Sun Devils lightly. Texas needed a late bucket by Joyner Holmes and a free throw by Lashann Higgs in the final minutes to advance to the Sweet 16 round in Lexington, Ky.

Arizona State players on Sunday sounded optimistic as they search for a road victory.

“Texas fans are going to be crazy and all that, but we just have to focus on each other, focus on the game,” sophomore guard Kiara Russell said. “You can’t focus on anything else.”

“It’s awesome to play in games like this and it comes down to just being connected with each other,” sophomore guard Reili Richardson added.

Aston made a pitch to Texas fans to join the fun Monday night, saying “it’s the only game in town” now that SXSW is over. Playing at home is a “reward” for a team that has been successful all season while playing one of the toughest schedules in the country. Texas should also benefit from a good student section because spring break is over.

“This is a perfect storm for us to have an unbelievable crowd,” she said. “We should have that. This team deserves that.”