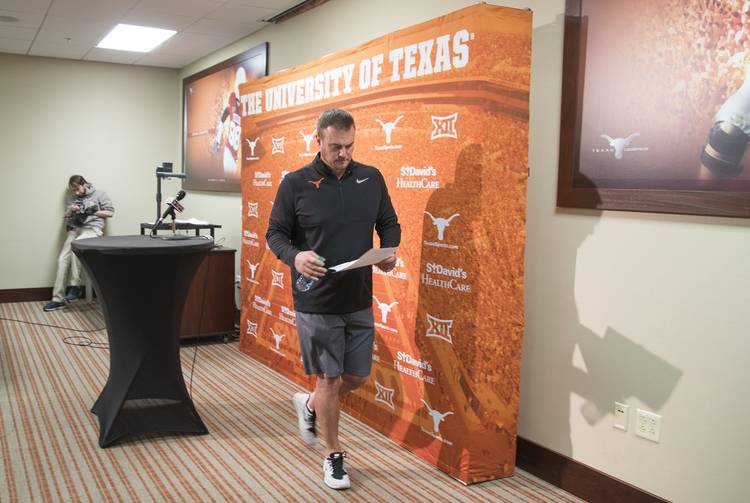 It’s a sure sign of progress when a program can lose six potential NFL draftees and everyone shrugs.

Most 7-6 teams that lose an All-American left tackle, a Thorpe Award finalist and the Big 12 co-defensive player of the year would likely be engulfed in panic. Not Texas, though.

The Longhorns would’ve welcomed all of them back, obviously. But coach Tom Herman is already looking ahead, sizing up a spring roster loaded with potential.

“He’s gained weight. He’s gained strength,” Herman said on Monday, the day before the Longhorns open their spring practices. “The one thing that’s really, really hard to teach, if at all, is physicality. You’ve got to really like hitting people at linebacker to be good and he does.”

“Guys like (defensive lineman) Charles Omenihu, who took some pretty big steps last year,” Herman said. “If he has that same level of improvement this year, the sky’s the limit.”

Wide receiver Collin Johnson “should be a guy that we can really count on,” Herman said. Cornerback Kris Boyd is one that “has all the measurables and really stepped up his maturity level.”

What about Rice graduate transfer Calvin Anderson, who signed on Monday and is projected to be an instant starter at tackle? “Yeah, or we wouldn’t have brought him here,” the coach said.

“And I know I’m forgetting some,” Herman said, “and I’ll probably get a mom that says, ‘Why didn’t you mention my son?’”

Yeah, what about Ryan Bujcevski? Texas is replacing one Australian punter — a Ray Guy Award winner, no less — with another. What about him? Well, if Bujcevski doesn’t sail his first attempt onto Red River Street, it’ll be an improvement over Michael Dickson’s UT practice debut three years ago.

“In our minds, there really are no starters,” Herman said. “Everybody has to earn their job in spring practice.”

Hope always springs eternal, but Herman wasn’t just going over the roster in rote, line-item form. He believes these Longhorns finally got the message with that 33-16 win over Missouri in the Texas Bowl.

Texas was without multiple starters, like tackle Connor Williams, safety DeShon Elliott and linebacker Malik Jefferson. The first two pulled out to protect their draft status; Jefferson was sidelined due to a toe injury. Others were hurt, like defensive lineman Chris Nelson (elbow) and almost every tight end on the roster. Texas went into that game microscopically thin, depth wise.

Still, Herman took over the play-calling duties and the Horns “secured the bag” over the Tigers, a SEC team that swaggered into Houston on a six-game winning streak.

Immediately afterward, Hager said the entire locker room had “bought in” with Herman and the staff. Given the quiet two months that followed, Hager was proven correct.

“We’ve got guys that want to be here,” Herman said. “There is a tremendous amount of positivity in that locker room right now. Very, very minute amounts of negativity or even anti-establishment or defiance in there. It just doesn’t exist. There was more of that last year than there is now.”

NCAA rules allow for 15 spring practices. Texas will hold its first workout Tuesday. It culminates with the annual Orange-White game on April 21. Kickoff is 6:30 p.m. Admission is free.

Over the next five weeks, Herman will gauge “the entire program,” he said.

Herman noted that both Shane Buechele and Sam Ehlinger played nine games last season. “But we didn’t play up to the championship level at that position,” he said. “They are going to need to prove their development.”

There are questions about running back. Kyle Porter suffered an ankle injury just before spring break. Talented freshman Keaontay Ingram will not arrive until the summer.

Anderson, a mathematical economics and religion major with a minor in business, arrives this summer, too. New offensive line coach Herb Hand will expect Patrick Vahe and Zach Shackelford to lead the way up front.

“We’ve added a blitz pickup period that coach Hand brought to us that they had done at Auburn that he really liked,” Herman said. “Other than that, we’re gonna play football.”

Defensively, the Horns will spend the spring polishing their “lightning” package, something that breathed life into Hager last season and helped in passing situations. In the pass-happy Big 12, anything that gets more speed onto the field is a plus. “I think the dime, lightning package is here to stay,” Herman said.

Perhaps there’s full buy-in from the players because they know what to expect. Things are almost always better in a coach’s second year. Or, perhaps enough Longhorns are tired of losing.

The win over Mizzou could be a larger springboard than anybody really expected.

“I just think there was a light-bulb moment,” Herman said. “Maybe this crazy guy and his crazy staff might have this thing figured out a little bit.”