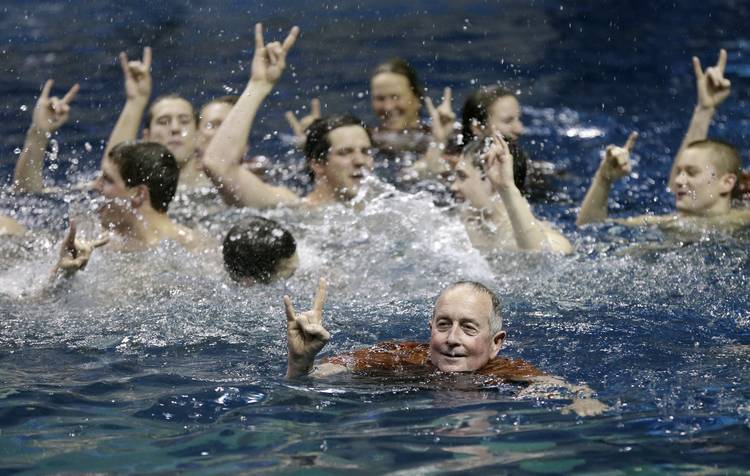 Shhh. If you’re over at the Jamail Texas Swim Center, don’t even talk about the streak. Rather, just quietly count the banners hanging from the left side of the building to see what’s at stake for the Texas men’s team this week.

“I don’t think I’ve ever heard him bring it up,” said Jonathan Roberts, the senior All-American backstroker and freestyler. “I know we talk about it just because we only get four years here. We definitely talk about it, but for us, you got to have it in the back of your mind because that’s kind of what the end goal is.

“When you’re hopping in the water, you always have to be thinking about the next NCAAs, the next Olympic Trials. That’s just how it is at our level.

“We’re looking up at the flags, that’s just some extra motivation to say hey, we’ve been there,” Roberts added. “At this point for my class, we don’t know anything but it. We want to stay there. Why don’t we just get better and stay there? It’s never been about the streak, just about getting progressively better.”

Reese shrugs when asked about his thoughts on a fourth straight title. He’s won 13 NCAA championships, the most ever in collegiate men’s swimming. The national championship banners are all there when you walk into UT’s massive swim center. Just look left. The first team title was won in 1981.

As for plans for this year?

“All I’m trying to do is get them to swim fast,” Reese said. “You can’t control what anybody else does. There are some teams with good people on them out there. This could be one of the better NCAAs that there have been.”

He’s already put together a streak of four straight titles, from 1988-91 when a bevy of Olympians bolstered the Longhorns. Reese’s teams, loaded with international stars, then won three national titles in a row from 2000-02. They were second in 2003.

In all, Reese’s teams have competed at 39 NCAAs. The Longhorns have finished in the top three in 31 of them.

The reason why this year’s meet could be so competitive is because Texas graduated a chunk of its gaudy talent that propelled the Longhorns to the last three titles. The Longhorns won seven individual titles a year ago. But only Townley Haas, a 2016 Olympic gold medalist who won the 200-yard freestyle, returns from that group.

Texas won four relay titles in 2017. Five of the seven swimmers who helped win the relays are back.

Joseph Schooling, who beat Michael Phelps for the butterfly gold in Rio, also is back for his final NCAA meet. He’s won four individual NCAA titles and has been an integral part of the relays.

UT is hoping for some spectacular performances by freshmen. Diver Jordan Windle already has set an NCAA record for points scored on the platform. Austin Katz is the top seed in the 200 backstroke.

California is ready to topple Texas. Reese says other programs with a chance for first place include Florida, Indiana, Stanford and North Carolina State.

“We’re always good enough to win,” Reese said. “But last year it depended on how we swam because we were a real good team and picked for first. This year, it may depend on how someone else swims.

“We swim really well, that’s all I go for every year. Take care of the people you coach. Get them to be better than they were last year. Significantly.”