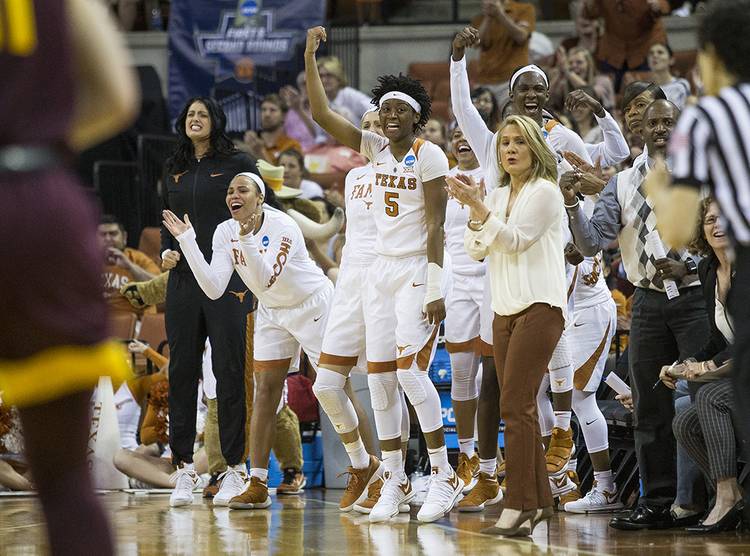 By her lofty standards, Brooke McCarty was having an off night until everything exploded early in the second half.

Texas was nursing a 40-38 lead against gritty Arizona State when the senior point guard came to life. She would score 12 points and grab five rebounds in the third quarter to turn a tight game into a Longhorn stampede.

Texas responded to McCarty’s lead and overpowered Arizona State down the stretch to earn an 85-65 victory in an NCAA Women’s Basketball Tournament second-round game Monday night at the Erwin Center.

McCarty finished with 15 points and a game-high 10 rebounds — her third double-double of the season — but that was just part of the story. Junior guard Lashann Higgs wrote an impressive chapter, too, scoring a team-high 19 points. Atkins finished with 12 and reserve forward Olamide Aborowa energized the team with 9 points, 7 rebounds and a blocked shot in just 11 minutes.

This marks the fourth straight season the Longhorns have earned a spot in the Sweet 16. That is a quite a tribute for McCarty and Atkins, who on Monday played their final home game in burnt orange. When they were removed for the final time with 1:44 to play, they were clearly emotional but shed no tears.

“They were about to,” Higgs said.

The final score might not indicate how Texas dominated most of the game. The Longhorns finished with a 40-19 rebounding edge, outscored the Sun Devils 54-20 in the paint and shot a blistering 61.7 percent from the field.

“You can almost tell they expected this (victory),” Longhorns coach Karen Aston said. “I know they want bigger and better things but this is a great accomplishment for our seniors. All four years they were able to (reach the Final Four).”

As always, McCarty was humble when describing her individual effort. She had three points and three turnovers in the first half and seemed to be pressing in her final home game.

“I think every player would be disappointed if they don’t think they’re playing up to their standards,” she said. “But right now it’s not about being disappointed. My team was playing great. So it’s not anything that’s on my mind. I’m more focused on our team winning.”

During the game’s pivotal stretch in the third quarter, went on a 12-0 stretch to turn a 40-38 lead into a 52-38 advantage. McCarty scored 10 points during an amazing three-minute stretch to deflate Arizona State.

“I think that’s the difference between a senior-junior team (Texas) and a sophomore-junior team (ASU),” she said. “It was, to me, just that level of experience and maturity where even though we’ve been that team that’s done that to other teams, obviously Texas is a little better at it than us.”

Arizona State (22-13) was competitive with Texas for much of the game. The Sun Devils received a heroic effort from forward Kianna Ibis, who scored 27 points, 19 in the first half.

Ibis, though, attempted only three field goals in the second half as UT’s interior players Jatarie White and Aborowa limited her touches.

“If you’ve followed her closely, she’s honestly one of our most improved players over her time here,” Atkins said. “So for her to go out and allow herself to be rewarded for her work tonight was just amazing.”

Now the Longhorns can look forward to bigger challenges — in Kansas City.

“I’m just incredibly proud of this basketball team,” Aston said. “I told the players in the locker room to never take this for granted … and appreciate how great of a season this has been.”

Tom Herman on Texas’ locker room harmony: ‘We’ve got guys that want to be here’