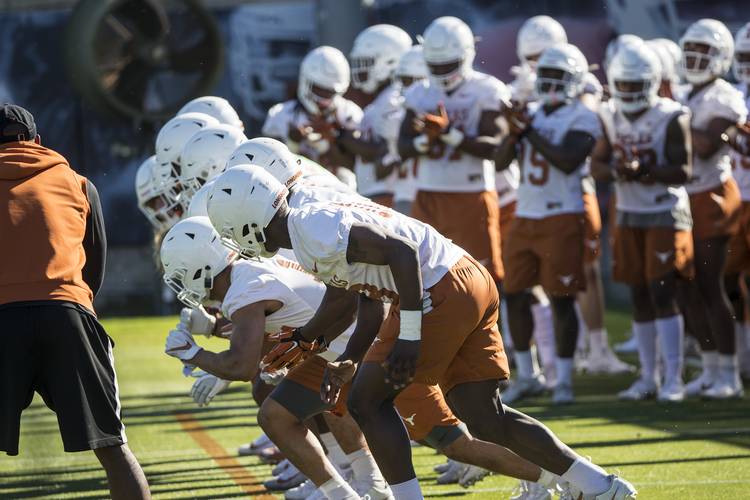 The NCAA forces college football teams to start spring practice in shirts and shorts, making it almost impossible to tell if anyone got considerably better or worse over the last two months.

Even Texas coach Tom Herman has a hard time eyeballing improvement in his players without pads.

“This isn’t football,” Herman said after UT’s first spring practice under a clear-blue sky on Tuesday. “I still don’t know why we have to go out there and play without safety equipment. It doesn’t make a whole lot of sense to me.”

Coaches are supposed to use 15 spring practices to teach proper techniques, he said.

“The assignments and fundamentals, all that stuff is going to be rusty for the veterans,” Herman said. “It’s going to be non-existent for the young guys. But the one thing we talk about all the time in this program that’s demanded — not coached, but demanded — is effort and ball security. I think we answered the bell today.”

Herman doesn’t have anyone slotted as starters at the moment. But someone must “jog onto the field first,” he says.

“I would be doing Poona and his contribution to this program an injustice if I didn’t say we were concerned about replacing him,” Herman said. “That guy, as I told you numerous times last year, was probably the hardest practicing defensive lineman I’ve ever seen since Casey Hampton.”

Ford held the point of attack in the middle, allowing UT’s linebackers to roam and make plays. He had eight tackles for loss last season and 1.5 sacks. Those may not sound like big numbers, but Ford’s presence was far more important than numbers alone.

“I think more than anything it’s going to be can we replace his production up there,” Herman said. “Yeah, I’m concerned. I don’t know if that’s the right word. I’m eager to see the guys that we have tasked with that job to perform their job.”

Herman also was delighted with both new freshman quarterbacks, Casey Thompson and Cameron Rising. Both players are trying to turn heads and stand out behind veterans Shane Buechele and Sam Ehlinger.

“The two young quarterbacks, they didn’t look out of place, which was good,” Herman said. “Obviously they screwed their fair share of things up, but they looked like they belonged.”

At least the Longhorns go through the first workout without any blowups from Herman or the assistants. That’s a far cry from last season’s first workout, where it took a half-hour just to stretch.

“Small victories, right?,” Herman said. “I think we made it through stretch in 10 minutes.”

Kerstetter versatile: Lineman Derek Kerstetter got thrown into the starting lineup last season out of necessity, and the freshman eventually started 10 games. Herman constantly joked about the freshman’s youth last season, and now that Kerstetter is a sophomore, “He’s shaving now on a regular basis,” Herman said. “That’s pretty exciting.”

Herman talked up kicker Josh Rowland’s capabilities in practice, and then Rowland couldn’t deliver in the games. The coach is now going easy on the specialists.

“When’s the first game?,” Herman said. “Seriously, you can do all you want, but it’s kind of like kicker. We’re going to go 100 percent in practice, and he’s going to bang them 45 yards with 4.5 (second) hang time here.”

Who knows what’ll happen when Texas opens the season against Maryland in FedEx Field. “We’ll know we have a chance by the end of spring if he’s got a chance,” Herman said.