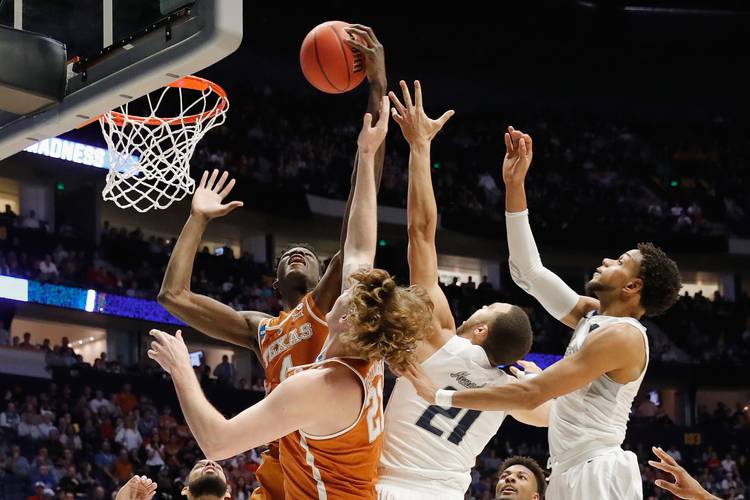 NASHVILLE, TN - MARCH 16: Mohamed Bamba #4 of the Texas Longhorns grabs a rebound over Kendall Stephens #21 of the Nevada Wolf Pack during the game in the first round of the 2018 NCAA Men's Basketball Tournament at Bridgestone Arena on March 16, 2018 in Nashville, Tennessee. (Photo by Frederick Breedon/Getty Images)

The Longhorns head into the offseason after a challenging season. But it’s not all bad.

Let’s not kid ourselves: Texas was the underdog against Nevada no matter what people say about Power Five conferences and athletic budgets. Texas was not as good as Nevada all year, but there were some things that looked good matchup-wise against Nevada that made the upset seem realistic in a tournament where the realistic upsets rarely happen and the unrealistic ones happen every year.

Texas led by 14 points in the first half and should have won the game. But Texas’ flaws came through as the offense struggled and Nevada started rolling. Once Nevada forced overtime, it seemed unlikely Texas could win — it had little to do with Mo Bamba having fouled it, though it would have helped if was able to play. Nevada was because that’s how this tournament works: teams that rally big and force overtime usually complete the circle and win the game.

Of course Texas would look like a Final Four type of team at times against Nevada. Of course the offense would be the main reason Texas lost. And of course the game would end in overtime.

Bamba is going to be an NBA player in a few months. Don’t think otherwise. He is ready, and he should go pro. He probably shouldn’t even have been a college player at all, but that’s another subject. Hopefully Texas fans enjoyed him, because he may be the second best one-and-done player in Texas history.

Let’s break it down:

Durant is No. 1 by a mile. But look at the other players and only factor in their college careers: Bamba is the clear winner as the program’s top one-and-done since Durant.  Thompson was the fourth overall pick in the draft and Big 12 Freshman of the Year with a 13.1p/7.8r/2.5b slash line. Bamba’s slash line: 12.9/ 10.5/3.7.

I don’t believe Turner got a fair shake at Texas. He was joining a team with massive expectations following the 2013-2014 season. Once the 2014-2015 season went south and Texas was not meeting expectations, Turner kind of became the scapegoat. Coach Rick Barnes struggled a bit to figure out how to use him, but at the end of the season, Turner was the Big 12 Freshman of the Year — considering other freshmen included Devonté Graham at Kansas and Keenan Evans at Texas Tech — and that’s a just the guys who were standout seniors this season — that’s a great honor. Still, Turner isn’t close to Bamba or Thompson, as Turner averaged 10.1 points, 6.5 rebounds and 2.6 blocks.

But it’s easy to imagine the amount of pressure Turner — and that whole team was facing — when it became clear from the outside that Texas was going to make a coaching change unless the Longhorns did something amazing in March. They did not.

3. Should Texas fans worry about anyone else declaring?

Long answer: There are a few players who could test the waters like Andrew Jones did last year. Jericho Sims is the only player I’d be remotely worried about if he declares so he can test his draft stock and winds up leaving. An athletic power forward could wow some people. At the end of the day, however, Sims’ offensive skill set isn’t NBA Draft ready — there are a lot of great athletic bigs in the NBA Draft and in the NBA, so if he can’t shoot more consistently, he should probably return to school.

Outside Sims, Kerwin Roach will likely test and maybe, in my opinion, even announce his return before the combine, like a handful of current standout seniors did a year ago.

I don’t expect Eric Davis to ever play at Texas again. His situation is not unlike one-time Kansas freshman Cliff Alexander, who was suspended by the NCAA over eligibility concerns at the end of the regular season. Whether he was guilty or not, he never fought the allegations and never played again for Kansas again, even though it was obvious he was not draftable. Davis may just be ready to make on-the-table money than return for his senior season.

Anyone else would be stunning if they left for the draft, which means any other changes would be due to transfer.

Texas already has a strong recruiting class locked in with two 4-star guys in the fold and two 3-star products, one of whom is local kid Brock Cunningham of Westlake High School. The top recruit is Cibolo Steele guard Gerald Liddell, who ranks as the state’s No. 2 overall prospect and No. 36 nationally. Kamaka Hepa out of Oregon is the No. 49-ranked recruit via 247 spots. Rounding out the class is 3-star Cincinnati, Ohio product Jaxson Hayes.

Texas also has transfer Elijah Mitrou-Long eligible for next season, which doesn’t count as part of the recruiting class, but he will play his first games for Texas next season.

Hayes, Hepa and Cunningham are all forwards, with Cunningham being listed as a three and Hepa and Hayes as fours. It doesn’t take a genius to figure out what position Texas thinks could see the most attrition — either through the draft or transfer — of some kind this offseason.

As it stands now, Texas is two over the scholarship limit, but that counts Davis, who is in limbo after the Yahoo! report in February, and Andrew Jones, who is battling leukemia. Texas would likely receive some kind of medical waiver, but Brian Davis reports some in the program are hopeful Jones — one of the best players on the team this season — may play as soon as next season as he is thankfully getting positive news on his treatment.

Is recruiting over for the Class of 2017? According to several recruiting sites, no.

Former Louisville commit Courtney Ramey, a 4-star guard from St. Louis, visited Texas in December and has yet to commit. However, 247 Sports predicts Villanova and Missouri as likely landing spots. There’s also Devonaire Doutrive in California, a 4-star guard, who 247 Sports reports has received some Texas interest.

Anything can happen in this cycle because there’s a good chance the coaching carousel is just starting. The possibility of more major jobs opening if anything else involving the FBI investigation breaks before the spring singing period is high.

The good news for Texas is that they aren’t needing a spring signing to secure their roster and team’s hopes. The last two recruiting cycles Jarrett Allen and Mo Bamba made Texas sweat it out. This year there aren’t any targets that Texas has to have, but there are targets Texas would like to have.

1. Texas should be good next year!

Yes, for the second year in a row Texas’ offense was damn-near unwatchable at times. Turns out adding a top-50, 4-star point guard wasn’t the solution to all the ills many thought when Matt Coleman arrived. Coleman helped, but the overall numbers didn’t change much.

But expect Coleman to make major leaps for the Longhorns this offseason and that will allow the offense to be a little different next season.

Coleman isn’t the only one to get excited about. In fact more people ought to be excited for a whole season of the offense running through Sims.

We won’t try to create coach Shaka Smart’s lineup, but next year’s personnel could allow Texas to play forward Dylan Osetkowski near the basket more and have Sims waffle from the four position to the five. I’m a believer that Osetkowski’s shooting ability should be an added bonus, not something the entire offense is built around.

And if Coleman’s and Sims’ sophomore years don’t get you excited, and the return of Osetkowski as a senior doesn’t get you jazzed up, Roach is about to be the best senior guard Texas has had in a longtime. Sure Roach can be a frustrating player at time, but so was Kansas’ Frank Mason before his senior season, he wound up winning National Player of the Year. Roach was Texas’ best player this past season from start to finish. Don’t be surprised if Roach is next year’s Kennan Evans or Mason.

In the middle of the season, I would have said Jacob Young was the one guy who I could have predicted leaving via transfer. Now I think he could be biggest superstar on the team next year. Young was as good as any player was for Texas this March and definitely went to another level when Texas needed it most.

A lot can change over the next month roster-wise, but as it stands now Texas should be competing not just to return to the tournament, but a Big 12 title.

We know Kansas is going to be as loaded as the Jayhawks have been in years. A top 5 recruiting class that can only improve, three high-level transfers and a handful of possible returning players from their now Sweet 16 squad, Kansas will be the heavy favorite to win the league.

Kansas State could return just about its whole team next season. By the way, Kansas State is in the Sweet 16 also.

Outside of those two teams and Iowa State (don’t laugh, the Cyclones return a lot of players), it could be a transition year for many Big 12 teams. Texas Tech has Zhaire Smith and Jarrett Culver returning, but they lose a bus-load of seniors. Same for TCU, Oklahoma State and Baylor. Oklahoma loses its best player — he’ll declare — Trae Young but the Sooners return more pieces than some will realize. West Virginia loses its two seniors, but one of those seniors is Jevon Carter, the best player of the Bob Huggins era at West Virginia.

I’m sure the league will be a grind and a lot of teams will be better than we think, but Texas not being one of the top three next season would be a massive disappointment.

And that leads into another factor:  The Shaka Factor.

We’ve seen Mack Brown, Rick Barnes and Charlie Strong all have rough starts to their final seasons and by the middle of the year it goes from “if he’s fired” to “when he’s fired” in the eyes of many Texas fans. Key word: Fans. I don’t think new athletic director Chris Del Conte is going to make some fan reactionary firing of Shaka Smart if the Longhorns finish with a winning record, top five in the conference but lose in the first round of the tournament again.

But if Texas has the same struggles they have had the last two seasons — and you’re relying on fans to come to the Erwin Center to watch exciting defense and a 30 percent 3-point shooting team — and the team loses more close games than win close games (on paper, the true difference between the 2017-18 squad and the 2016-17 squad), all bets are off.

Smart will have everything a coach needs to win at Texas next season. If this team is bad enough not to make the tournament next season, and injuries aren’t the reason, he’ll have no one to blame but himself.