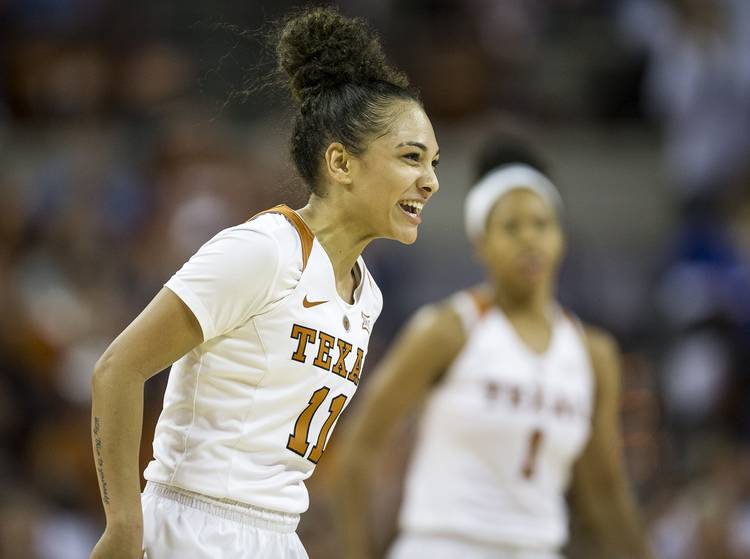 Texas senior guard Brooke McCarty (11) will be playing in her fourth Sweet 16 as a Longhorn. On Friday, Texas will face UCLA in a regional semifinal in Kansas City, Mo. NICK WAGNER / AMERICAN-STATESMAN

“It’s going to be a track meet,” said Turner Thorne, whose Sun Devils lost to both teams this season.

Although her team competes in the Pac-12, Turner Thorne appeared to give Texas a slight edge when the Longhorns take on the Bruins on Friday night in the Kansas City (Mo.) regional.

“Well, both are great transition teams,” Turner Thorne said. “I think Texas probably has a little more depth. They both have really good seniors.

“UCLA’s challenge might be the inside game, but they’ve handled that with Oregon and Stanford and other teams in the (Pac-12) conference.”

Indeed, UT’s inside game has spelled trouble for most foes this season. Texas ranks second nationally out of 349 Division I women’s teams in rebounding, averaging 11.3 more boards per game than their opponents. Against ASU, the Longhorns had a 40-19 rebounding edge.

Longhorns coach Karen Aston noted that Texas has faced UCLA in closed pre-season scrimmages in recent years, but Aston doesn’t figure her players remember much about them. The coach, though, keeps tabs on many potential opponents by watching them on television.

“I’ve seen them while randomly watching Pac-12 games in the middle of the night when you can’t sleep,” Aston said. “Then we looked at them (on tape) purposely when we prepared for Arizona State.”

The best individual matchup Friday might be between the teams’ point guards — All-America candidates Jordin Canada of UCLA and Brooke McCarty of Texas. Canada leads the Bruins in scoring with an average of 17.6 points per game, and she ranks seventh nationally with an average of 7.1 assists per game. McCarty leads the Longhorns in three-pointers made (60), assists per game (3.4) and free-throw percentage (.889).

The Bruins also count heavily on Monique Billings, a 6-foot-4 senior forward who has averaged 15.3 points and a team-best 9.7 rebounds. Junior guard Kennedy Burke, the Bruins’ third-leading scorer this season, averages 10.5 points. UCLA’s reserves include former Vista Ridge standout Japreece Dean, a 5-6 guard who transferred from Texas Tech and is the Bruins’ top scorer off the bench at 7.3 points per game.

“You’ve got a 2 seed (Texas) and a 3 seed (UCLA), and if we had beaten Oregon in the Pac-12 Tournament, we could have been a 2 seed,” she said. “At this point I have always said that if you can get into a regional and go to a neutral site, anyone has an opportunity. Our conference has proven that. I also am really thankful for our conference. We’ve got four teams (UCLA, Stanford, Oregon and Oregon State) in the Sweet 16.”

UCLA and Texas have faced six common opponents — Connecticut, Baylor, Kansas State, Oklahoma State, Washington and Arizona State. UCLA handed Baylor its only loss of the season, and the Lady Bears beat Texas three times. All told, UCLA is 4-2 against the teams’ common opponents, Texas is 6-4.

12 Big things about Big 12 basketball: And then there were 4

The Dotted Line: Can Texas repeat its defensive back recruiting success in 2019?