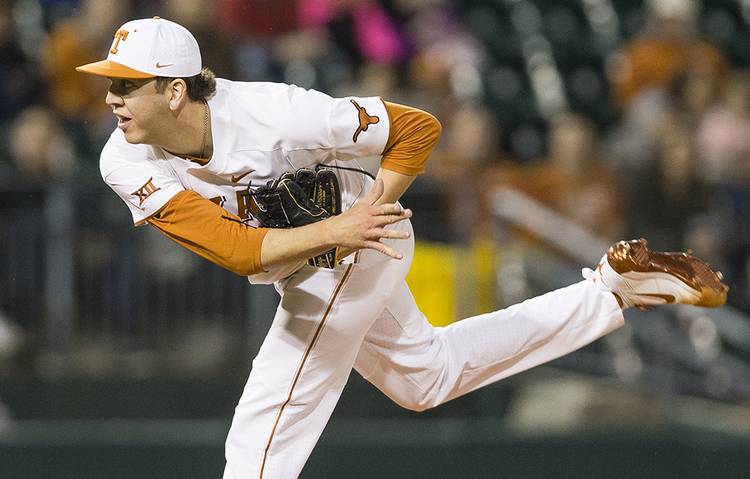 Among the problems Texas baseball has encountered through 22 games — the times when the offense has failed to produce at the plate, or the starting pitcher has been rocked for early runs — perhaps the biggest has been the bullpen.

The Longhorns’ bullpen carried a 5.99 ERA heading into Tuesday’s game against No. 25 Sam Houston State. But it was the bullpen that held the Bearkats to just one run in six innings in Texas’ 3-2 win at UFCU Disch-Falk Field.

But it was almost two runs. Almost.

With the Longhorns protecting a two-run lead in the top of the eighth inning, Bearkats catcher Jordan Cannon roped a double to the gap in left field. Chase Cryer, who had singled to lead off the inning, was waved home for the tying run. But left fielder Tate Shaw immediately picked up the ball and fired it to second baseman Kody Clemens, who then fired a strike from the outfield grass home to catcher DJ Petrinsky. Petrinksy tagged Cannon out just as Cannon tried to slide under the catcher’s right hand.

“Really a couple of defensive plays were the difference,” UT coach David Pierce said after beating his former team.

Freshman pitcher Bryce Elder gave up a run later in the inning, but it was the only run allowed by UT’s three relievers — junior Matteo Bocchi, Elder and weekend starter Nolan Kingham, who earned his second save. Elder, who entered the game with a 7.45 ERA, pitched 3 2/3 innings after starter Nico O’Donnell pitched three. In his previous two relief outings, Elder had given up five runs and produced only two outs.

“He had back-to-back poor outings and he came out tonight when we needed him, so he’s not afraid to work and he believes in himself,” Pierce said.

The Horns (13-9) have now won four straight games — their second four-game winning streak of the season — after losing five straight to Stanford and Arkansas. Tuesday’s win was their third of the season against a Top 25 team. Texas hosts Oklahoma State this weekend.

“We knew it wasn’t going to be a normal mid-week game. We knew we had to come in and do our job and keep playing the way we played last weekend,” said shortstop Masen Hibbeler, who was 1 for 4 with an RBI.

O’Donnell started off a bit shaky. In the freshman’s 15 2/3 innings, he’s given up nine walks and allowed 13 hits. But he’s also been able to pitch himself out of trouble — just like Tuesday, in front of 4,304 fans.

O’Donnell walked two batters in the first inning, but escaped. He allowed back-to-back singles to start the second but then struck out the side. The third inning was where the Bearkats finally got to him. A fielding error by Hibbeler, a single and a walk loaded the bases with two outs. O’Donnell then walked left fielder Clayton Harp as Sam Houston State took a one-run lead. Yet the damage could have been worse.

Bocchi relieved O’Donnell in the fourth and over the course of 1 1/3 innings, he only allowed one base runner and struck out three Bearkats.

“Nico wasn’t very strong early and somehow we managed to get through three innings with only one run,” Pierce said.

Consecutive doubles by Austin Todd and Ryan Reynolds in the fourth tied the game and a single up the middle by first baseman Jake McKenzie gave Texas a 2-1 lead. Another run in the next inning gave Texas a 3-1 lead.

12 Big things about Big 12 basketball: And then there were 4