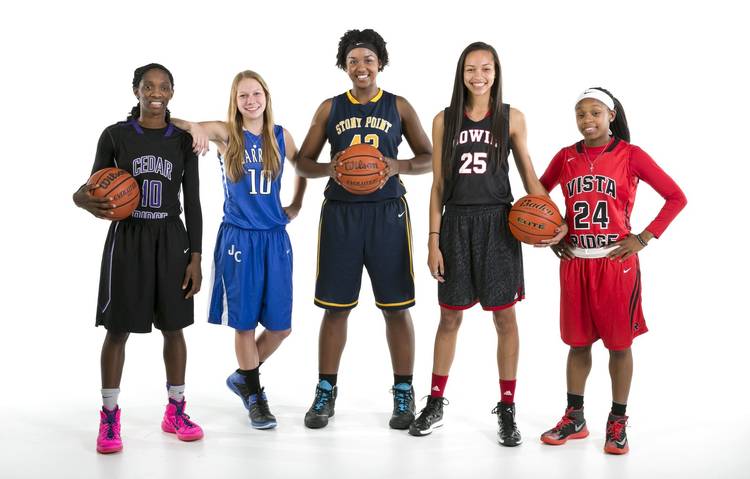 Among the five local players honored on the 2015 All-Central Texas girls basketball team? Cedar Ridge's Lashann Higgs (far left) and Vista Ridge's Japreece Dean (far left) They never faced each other in high school but will on Friday night when Texas meets UCLA in the Sweet 16 of the NCAA women's basketball tournament. (Jay Janner, American-Statesman file)

KANSAS CITY, Mo. — When UCLA coach Cori Close arrived in Austin to scout the area’s talent, her telescope was focused on Cedar Ridge shooting guard Lashann Higgs. But when Higgs chose to stay close to home and attend Texas, Close figured her window on Central Texas basketball players had closed.

Three years later, though, the Bruins coach is happy to have another Austin-area player wearing blue and gold.

If Cedar Ridge’s Higgs was the No. 1 girls basketball player in the area back in 2015, then Vista Ridge’s Japreece Dean was 1B. Both were members of that year’s All-Central Texas team; Higgs led Cedar Ridge to a 30-3 record her senior year while Dean went 133-17 in her Vista Ridge career.

Dean, who originally signed with Texas Tech, did not attract as much recruiting attention that was afforded to Higgs.

Close said Thursday that she recruited Higgs, but not Dean.

“I didn’t recall Dean out of high school, so I had a better knowledge of Higgs in terms of her growing-up years and in terms of watching her play,” Close said. “Loved her mid-range game, her ability to guard.”

Higgs and Dean will be among the key players when No. 2 seed Texas (28-6) takes on No. 3 UCLA (26-7) in a Sweet 16 game Friday night in the Kansas City regional. Friday’s winner meets the Mississippi State-North Carolina State winner on Sunday.

Higgs has developed into a reliable starter in UT’s three-guard offense and was a key player in the Longhorns’ first- and second-round victories over Maine and Arizona State. She combined to score 34 points in those two games, hitting a remarkable 15 of 19 shots from the field.

Dean, who led all Big 12 freshmen in scoring during her one season at Texas Tech in 2016, was granted her release last season after playing in only two games. She has emerged as UCLA’s first player off the bench, a bundle of energy whenever she touches the court. She scored 16 points on Monday night — her fifth double-figures game of the season — to help the Bruins earn a berth in the Sweet 16 with an 86-64 victory over Creighton.

While Close had no recollection of Dean in high school, Texas’ Karen Aston was familiar with both.

“The thing that struck me about Japreece is how competitive she is,” Aston said. “She proved that during her time at Texas Tech and has impacted UCLA’s team immediately.

“Lashann and Japreece are different. Japreece is a point guard who is playing off the ball right now because of (All-America point guard candidate) Jordin (Canada). Lashann is a scoring guard and combo who is the most comfortable at the wing position where she is now.”

Higgs and Dean are casual friends, hardly enemies. Surprisingly, they never played against each other in high school.

Said Dean: “I thought (Higgs) was super quiet, super athletic. I was like, wow, just to see another player that good around town.”

Said Higgs: “(Dean) is very crafty. She has the right handles and she has the shot. She leads her team in a great way.”

Higgs is often overlooked on a team that features guards Ariel Atkins and Brooke McCarty. Those seniors, though, praised her for being a good teammate and heavy contributor.

“Lashann has grown tremendously from her freshman year,” Atkins said. “Her growth has been amazing. She has taken it to heart on focusing on how to get better to help the team.”

Added McCarty, “I’m excited to see what Lashann has in store because she has another year. When she has that leadership role, I’m amazed at the things she’ll be able to accomplish.”

Walking behind their long shadows, Higgs said she has learned a lot from Atkins and McCarty. She knows the keys to the Longhorns backcourt will be in her hands when the team convenes in the fall.

“There’s so much more on your plate when you’re a senior,” Higgs said. “I’ve seen the way they have led the team. I’m going to try to imitate what they do and try to do it in my own way.”

Having played almost every position, Texas’ Jake McKenzie finds a possible home at first base