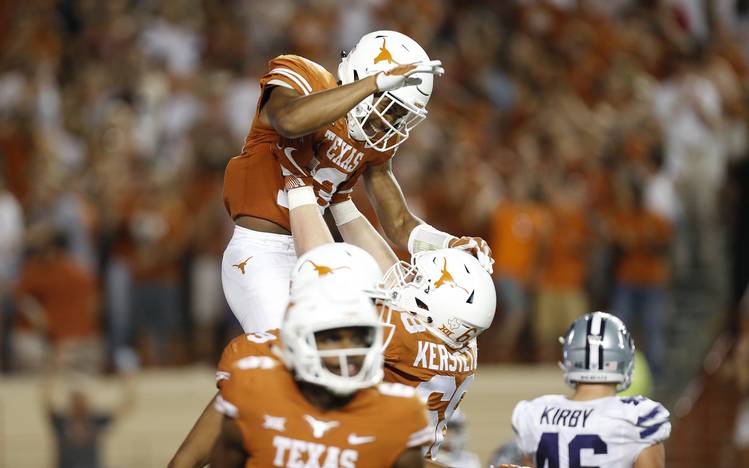 “The Juice” has aged quite well over these last few years.

OK, so maybe Jerrod Heard doesn’t feel as spry as he did when he arrived at Texas. “I’m old as hell,” he said after Thursday’s practice. Still, on a roster tilted toward underclassmen, the Texas receiver has been around long enough that he qualifies as an elder statesman.

Heard, who will be a senior this fall, has been at the forefront of massive changes within the program. He came in as a heralded quarterback, broke Vince Young’s single-game total yardage record against California in 2015 and was thought to be the answer to UT’s prayers.

But teams figured out how to stop Heard in the open field. He struggled throwing against Big 12 defenses, and eventually, Heard moved to receiver. Along the way, Texas changed head coaches, burned through numerous offensive coordinators and experienced multiple ups and downs.

“With this team, it’s capable,” he said. “What we did last season, how we finished strong and won that bowl game, it shined a light on us that we’ve never had before in a long time. It’s going in a positive way and I’m excited for the team.”

It doesn’t sound like Heard is eager to show off those throwing skills anymore. Asked if he would tell the coaches he could throw a pass, Heard demurred. “It’s been a minute since I’ve thrown a pass now,” he said. “I’m kind of scared to put that in his ear.”

And besides, Heard believes the Longhorns are just fine with the four quarterbacks UT now has on the roster.

“Yes, the quarterback room is deep,” he added. “I’m rooting for those freshman guys to battle and keep competing. Like I tell the (defensive backs), iron sharpens iron. When you’re in a room full of good QBs like that, it’s just going to help out the team.”

Heard said his sole mission these days is to tutor the younger receivers. If Heard spends much time thinking about the past, he certainly doesn’t acknowledge it.

“I guess if I thought about the worst, I feel like it would’ve never worked out for me,” Heard said. “I always kept a positive attitude, and the guys around me, they just kept me up as well. That kept me motivated to be the best and bet a teammate for them as well.”

Anderson watching: One of the most important members of the 2018 roster was in street clothes during Thursday’s practice. Rice graduate transfer Calvin Anderson attended practice and stood off to the side while the UT offensive linemen went through position drills.

Anderson cannot officially join the Longhorns until the summer when he finishes up his degree at Rice. Fair or not, he’s already been labeled as a potential starter at left tackle, the same spot previously occupied by All-American Connor Williams.

“Yeah, it’s tough for him,” UT coach Tom Herman said. “He’s out there in shorts and a T-shirt with a script trying to learn the offense. The rest of the linemen are out there working their tails off.”

Herman is adamant that Anderson will have to earn his position just like anyone else. “I expect him to come in here, and if his best is what we think it is and he picks the offense is, he’s got a great chance to earn it,” the coach said.

Big-play Collin: Receiver Collin Johnson may be one player the coaches are pushing the hardest. He had 54 catches for 765 yards and two touchdowns last season, but even he would admit Johnson wanted so much more. Inconsistency was his main issue.

“That’s the word, consistency,” Herman said. “He had some unbelievable plays today and some plays that a junior shouldn’t be making.”

Long after UT finished workouts, the school tweeted out a video that was the likely play of the day. Johnson is seen making a terrific one-handed snag while being guarded closely by Anthony Cook.

Pads coming on: Saturday will be the team’s first spring workout in full pads. The intensity will be considered “thud” level.

“This will be a full-pad, non-tackling day,” Herman said. “You won’t see a ton of guys going to the ground. But you can get a lot accomplished in thud.”

The Dotted Line: Out-of-state offers in 2019 class with legit interest in Texas