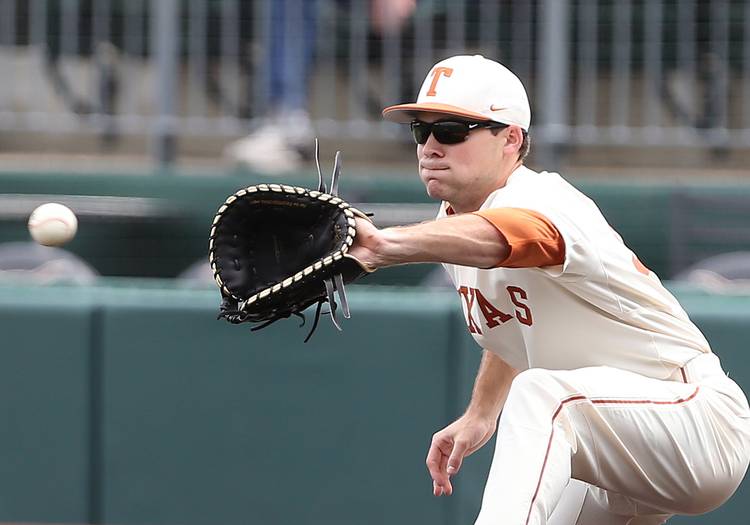 Longhorn first baseman Jake McKenzie catches the ball for an out against Northwestern at UFCU Disch-Faulk Field on Sunday, March 4, 2018. JAMIE HARMS / FOR AMERICAN-STATESMAN

Over his four seasons at Texas, Jake McKenzie has defined the role of a utility player. He’s been a defensive Waldo in burnt-orange stripes, if you will.

So, Where’s Jake? He’s been spotted on the pitcher’s mound 29 times in his career. There have been 30 appearances at second base. He’s played 13 games at first, eight games at third and has played every position in the outfield. He’s twice been the designated hitter. In Texas’ 16-3 rout of Northwestern on March 3, McKenzie convinced head coach David Pierce to let him play shortstop for an inning.

That just leaves playing catcher on his bucket list.

“I played a lot of catcher in high school, so I’m familiar with the position,” McKenzie said earlier this month. He also noted the topics of playing catcher and appearing at all nine positions in a single game have been discussed.

First base is where Oklahoma State should expect to find McKenzie this weekend. Texas (13-9) will host the Cowboys (10-8-1) in a rematch of last year’s Big 12 championship game.

McKenzie is a lifetime .232 hitter and has only seven hits in 2018. His glove, though, has been a longtime asset and Pierce has stated that McKenzie is his best defensive option at first base. In one inning last weekend against Kansas, for example, McKenzie nearly did the splits while nabbing a throw. He then made a diving stop on a ground ball.

“He’s doing an awesome job at first, if y’all haven’t noticed that,” said junior Masen Hibbeler, another utility player. “I feel like everybody’s noticed. He’s picked me up, he’s picked everybody up.”

McKenzie, a four-time all-district player in high school, arrived at Texas in 2015 alongside other freshmen like Michael Cantu, Travis Jones and Kyle Johnston. McKenzie, though, was a walk-on who “didn’t know if I was going to make the team.” If anything, McKenzie was hoping to prolong his career as he studied petroleum engineering.

McKenzie was one of four walk-ons in that recruiting class. Nearly four years later, he and outfielder Tate Shaw have developed into starters.

McKenzie contributed immediately as a relief pitcher in 2015. A year later, he was the starting second baseman in 18 of UT’s final 19 games. He was used at five different positions his junior year, and his pinch-hit double beat Kansas at the Big 12 tournament.

During UT’s season-opening weekend last month, McKenzie injured his shoulder on a head-first slide into first base. After missing seven games, he has appeared 11 times at first base. He’s also pitched twice and logged at least one inning at every other position in the infield.

“The numbers have been stacked against me every year,” McKenzie said. “I came here for school, hoping to play baseball and it’s been fun getting that opportunity.”

After Tuesday’s 3-2 win over No. 25 Sam Houston State, Texas has won four straight games. Next up on this all-orange week at UFCU Disch-Falk Field is three games against Oklahoma State. Texas owns a 60-42 lead in the all-time series with the Cowboys, but Oklahoma State beat UT in Oklahoma City last year for the conference title.

Oklahoma State ranks last in the Big 12 in batting average (.232), and their 5.07 ERA bests only Kansas State. The Cowboys, however, are 4-1 against teams that reached last year’s NCAA tournament.

“We haven’t talked about last year,” said pitcher Blair Henley, who’s expected to start Friday’s game. “We’re going into Oklahoma State knowing what we can do and just doing what we have to do in order to win.”