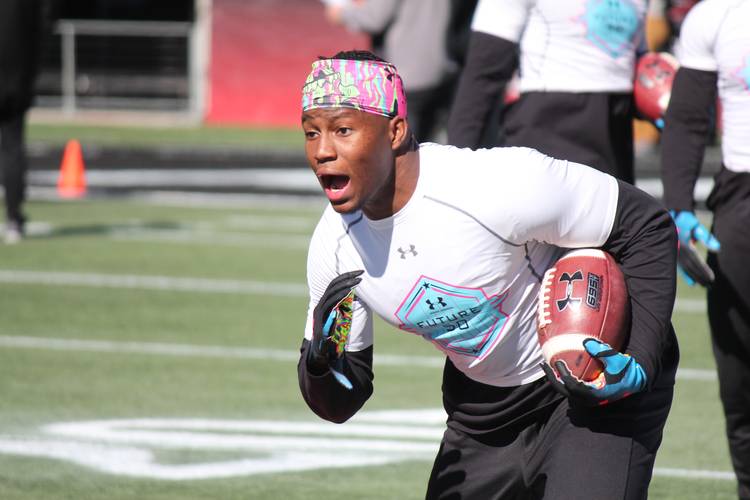 Not all offers are created equal

Even a school that purposely slow-plays recruiting and limits the number of offers given out like Texas can’t concentrate on every prospect on the board. The sheer number makes it impossible for a coaching staff to pour the appropriate amount of attention into each prospect in the country. This is especially true for out-of-state offers.

The state of Texas is fertile with talent. The Longhorns, or any of the programs inside the borders, don’t need to do much more than cherry-pick players from out of state at positions of need. Texas needed quarterbacks in 2018 but couldn’t find them in state, forcing them to recruit out-of-state players like 4-star signees Cam Rising and Casey Thompson.

Recruiting is a form of supply and demand. Texas will spend most of its time recruiting inside state lines. Tom Herman doesn’t mind fishing outside the state, however, as evidenced by a handful of out-of-state signees in the 2018 class. Still, Texas leaned heavily on in-state success in the last cycle and signed the top five players on the Fabulous 55.

The strategy worked in 2018, so don’t expect Herman and his crew to change much this cycle. The group will hope to slowly build an elite class and end with a bang. It’ll concentrate on landing top targets within the state and then move outwards for positions the state isn’t producing enough supply. In the 2019 class that is likely in the secondary, at running back and at least one of the linebacker spots.

Texas has sent out more than 100 offers, per 247Sports, and half are to out-of-state prospects. Not all of those offers are treated the same and not every player on that list is still a priority for the staff — either by the staff’s choice or by the prospect’s. There isn’t enough time to waste on a player with an offer who isn’t seriously considering the program. This is true at every school and Texas is one of the most disciplined programs when it comes to extending offers.

It’s just the nature of the landscape. A player wants an early offer from a school to prove belief. However, a program is disingenuous if it gives out offers to every elite player at each position. It’s a tricky balance for college coaches, especially with the advent of social media and the need for prospects to “see the love” from coaching staffs.

Texas holds three commitments in the 2019 class and hopes the bulk of the cycle consists of prospects from the Lone Star State. However, it is inevitable that Texas will sign nearly a handful of prospects from across the country. It’s still early in the cycle, but here are five out-of-state targets with Texas offers who are truly considering the Longhorns:

The best cornerback on Texas’ 2019 recruiting board hails from California. Steele is a masterful prep cornerback who combines speed, length and physicality. He earned an invitation to The Opening Final this summer in Frisco and is one of the top three cornerbacks in the country. He was a one-time UCLA commit, but it is USC that is currently the favorite to land the 5-star cornerback. Getting him back on campus for an official visit is the key to land Steele.

Cain is the normal out-of-state recruit. He was a standout at Denton Guyer as a sophomore before moving to IMG Academy. He was the District 5-6A offensive newcomer of the year as a freshman and the district’s MVP as a sophomore. Cain competed at the Future 50 Camp in Orlando this January and will attend The Opening Finals in Frisco this summer. Cain would be considered the best in-state running back in the 2019 cycle if he was still in Denton.

It’s a two-team race for the 4-star safety from Georgia. Watson is down to Texas and Notre Dame and has official visits planned to both in April. Texas will host him on April 27 and will get the last official visit for Watson before he decides. He can play cornerback or safety and has spent time at both positions in high school. Free safety is likely his future position in college. He’ll visit Notre Dame two weeks before his visit to Austin.

Floyd emerged as a legitimate target when he took a weekend visit to Austin for Texas’ junior days. He has family in Austin and was blown away by his time on campus. USC is still the favorite, however, and the Longhorns need to get Floyd on an official visit to stand a chance of getting him out of California. It’s not a good year for linebacker prospects in the state of Texas and Floyd is the top prospect at outside linebacker.

Wilkins also made a trip to Austin for junior days. Texas made a real impression and should be considered among his favorites along with Arkansas and Oklahoma. There are a trio of in-state offensive tackle targets the Longhorns are chasing and Herman might want to see what happens with Kenyon Green, Tyler Johnson and Javonne Shepherd before putting the full-court press on for an out-of-state prospect like Wilkins. He is set to announce on May 9.