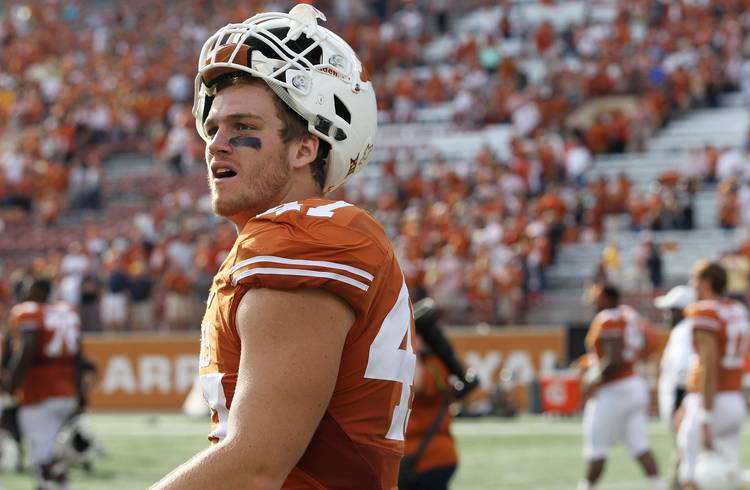 After the Longhorns’ second football practice of the spring, Beck was among the four players who met with the media. It was Beck’s first appearance in front of the cameras and microphones in a while. Since he missed all of last season with another foot injury, he was promptly asked Thursday if he had a “toolbox” worth of screws in his left foot.

In reality, Beck probably has a plate and two screws in his foot. He said the Houston doctor who performed the surgery didn’t give him specifics. Beck added that he feels good and is anticipating his senior season.

Beck, of course, was supposed to conclude his run at Texas in 2017. Those plans were curtailed when he fractured his left foot during a preseason practice. A tight end, Beck previously had suffered another injury to the same foot during the preceding off-season.

Beck returned to practice by November, but Texas redshirted him during a season that ended with a victory in the Texas Bowl. Longhorns head coach Tom Herman gave Beck the option of returning for a fifth year on campus. Beck said it was a post-injury talk with his father , though, that motivated him to launch a comeback.

“It was kind of corny, I loved it,” Beck said when asked what his father, Chris, had told him. “He told me the world is trying to crush people’s dreams every single day, don’t be the one to take it away from yourself. That will stick with me forever, and I’ll pass that down one day.”

Beck said he always dreamed of playing at Texas. While being interviewed inside the Longhorns’ practice bubble, Beck recalled once taking a picture in the same location with Mack Brown and the 2005 national championship trophy. (Beck is believed to be the last player recruited to UT by Brown.)

Beck still served as a captain last year, and he’ll return as the elder statesman among the tight ends. Texas has signed three-star recruit Malcolm Epps and Cade Brewer recorded nine catches before a knee injury ended his freshman year. Reese Leitao also has had some first-string reps this spring.

The 6-foot-3, 245-pound Leitao was a member of Herman’s first recruiting class at Texas. He was suspended for the first two games of the 2017 season after he pleaded guilty to a misdemeanor drug possession charge. Texas eventually decided to redshirt him, but he has since made an impression on UT’s coaches.

“He’s strong as an ox, super smart,” Herman said. “You can tell he’s a coach’s kid. He goes hard. When he screws up, it kills him. We’re excited about him.”

Being surrounded by talented tight ends might be a foreign concept to Beck, who has 16 starts and two touchdown catches to his credit. Beck was signed by Charlie Strong, who viewed the position as a haven for players who could block and were miscast at other positions. Beck was actually a linebacker before he switched positions during his freshman year.

“It is nice, even though they’re younger guys. Everybody in that room pushes me a lot because they’re all natural tight ends,” Beck said. “It’s great to have people that can push me to get better as (opposed) to having to find ways to motivate myself

The Dotted Line: Out-of-state offers in 2019 class with legit interest in Texas