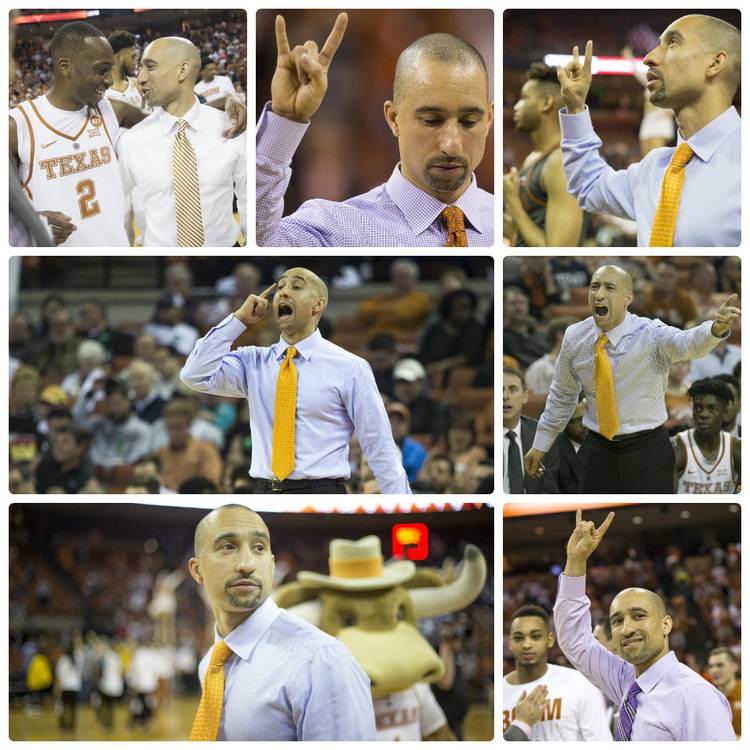 Shaka Smart has had his share of ups and downs through his first three seasons as Texas' head basketball coach. Through his first 100 games, he's 50-50. (American-Statesman Staff)

This will infuriate some Texas fans, but this past season was easily coach Shaka Smart’s best so far with the Longhorns.

He successfully navigated the emotional impact of Andrew Jones’ leukemia diagnosis. The Longhorns were ensnared in the growing FBI probe into college basketball as Eric Davis Jr. allegedly accepted money from an agent. Even star freshman Mo Bamba had to miss three key games with a sprained toe while the team’s NCAA Tournament hopes were in flux.

Despite all of it, the Longhorns still managed to reach the NCAA Tournament, something a program of such magnitude should consider a minimum bar.

Texas athletic director Chris Del Conte left no doubt about his opinion. “Shaka’s a hell of a coach,” he told reporters in Nashville. “He’s a hell of a person.”

Pull the lens back, and the evaluation of Smart’s tenure becomes far more complicated.

After three seasons, Smart has an overall record of 50-50. He’s had two first-round NBA draft picks and has put together back-to-back top-10 rated recruiting classes — but no NCAA Tournament wins.

By any reasonable measure, that’s not acceptable for a coach guaranteed more than $3 million annually.

In Jamie Dixon’s first rebuilding season at TCU, the Frogs won the NIT in 2017. This season, TCU climbed up to 10th in the Associated Press Top 25 poll and reached the NCAAs despite losing star guard Jaylen Fisher to a knee injury. In Chris Beard’s second season at Texas Tech, the Red Raiders got as high as No. 6 and advanced to the Sweet 16.

Some could argue it shouldn’t be this difficult. Former UT coach Tom Penders was 72-27 in his first three seasons. Rick Barnes went 68-31. Penders won a conference title in his fourth year; Barnes won the Big 12 in his first.

One gets the sense that Smart himself knows his program needs to gain more traction. Before the NCAA Tournament began, he discussed big-picture questions on the American-Statesman’s sports podcast, “On Second Thought.”

“I love coaching here. My family loves being here,” Smart said, addressing a persistent rumor that he’s personally not happy in Austin. “To your question about where we are as a program almost three years in, obviously you’re never all the way where you want to be.

Smart said as long as the program continues to attract quality people, “I think we can do better and better things.” His 2018 recruiting class is ranked 13th nationally, according to 247Sports.

Some may argue it that it shouldn’t.

Unlucky breaks? In Smart’s first season, big man Cam Ridley suffered a fractured foot and missed all of Big 12 play. Texas still got into the NCAAs, but a half-court buzzer-beater certainly qualifies as unlucky. Northern Iowa’s Paul Jespersen banked in a miraculous shot — a true “One Shining Moment” that will live on for years — to knock out Texas in the first round.

Twists and turns? In Smart’s second season, he did not expect point guard Isaiah Taylor would turn pro. Taylor was projected to be a cornerstone of Smart’s second team. Instead, he went undrafted and started his pro journey in the NBA’s developmental league.

Now, it can be argued that Smart whiffed by not recruiting a point guard to plug the potential hole. Internally, it was discussed whether signing another guard would hurt UT’s pursuit of Matt Coleman, who was a 2017 recruit. Asked two weeks ago if that would’ve changed his decision, Coleman said, “I don’t know.”

Smart then had to dismiss leading scorer Tevin Mack during non-conference play. Mack proved immature and too volatile in the locker room. Smart later admitted he had regrets about the decision.

Without a point guard and scoring punch, Texas finished last in the Big 12 at 11-22 even with Jarrett Allen, an eventual first-round pick of the Brooklyn Nets.

This past season, Bamba’s commitment energized everyone inside Cooley Pavilion. Reporters were once allowed a rare invitation to practice, and Bamba’s athleticism was eye-popping.

Bamba and Coleman’s arrival was seen as a game-changer. Pairing those two alongside Jones, Davis and Roach would give Texas a solid nucleus. There were high hopes for Dylan Osetkowski, a transfer few knew anything about, and Jericho Sims, a jumping-jack athlete with loads of potential.

The first real sign Texas might have something came early in the season, against Duke. The Horns built up a 16-point lead with 11:09 remaining at the PK80 tournament in Oregon. But the Blue Devils turned it on down the stretch and won 85-78.

Another positive indication was a 71-67 win at Virginia Commonwealth. Smart took his new team back to his old stomping grounds, and the Horns escaped a hornets’ nets with a win. A 66-50 win at Alabama pushed UT’s record to 9-3.

Conference play began with a loss to Kansas and a win at Iowa State. Then Jones missed the trip to Waco on Jan. 6. Two days prior, Smart had learned about Jones’ diagnosis. Two days after a 69-60 loss to Baylor, Smart told the players. From that point on, everything changed.

Several times, Smart made reference to this being “big-boy basketball.” No matter what was happening, he told the Horns, the season continues.

The Longhorns were the second-lowest scoring team (72.1 ppg) in the Big 12 this season. They were the worst 3-point shooting team (.320) in a sport where the 3-point shot is now valued more analytically than a 2-point basket.

Night after night, Texas’ guards would waste time on countless possessions dribbling around waiting for something to happen.

Defensively, Texas was one of the league’s stronger teams. Part of that was due to Bamba, who racked up a UT season-record 111 blocks. But this was a team lacking a clear offensive identity, other than find a lane and drive to the basket.

“If we would’ve had our whole team, it would have been a really interesting year,” Smart said on the podcast.

It’s hard to gauge whether next season — Smart’s fourth — is a make-or-break affair. His guaranteed contract, which features escalated salary clauses, runs through the 2022-23 season. Smart’s buyout would be more than $15 million if UT fired him after next season.

Administrators don’t want that to happen, though. They want Smart to stay here long-term. “He’s handled everything terrific,” one administrator said. But, they all admit the Horns need to win more.

“We actually were better, much better, when we were in a situation of adversity and we had to respond to,” Smart said after the season-ending loss to Nevada. “This team’s got to learn how to play with a lead. This team’s got to learn how to play coming off a win, coming off a couple of wins. We’ve got to get better at that. And that obviously starts with me as a coach, finding a way to push the right buttons to have the guys in the ideal mindset.”

Reloading for next season

Cornerstones: Kerwin Roach II, Matt Coleman. Both players had career-high performances against Nevada. Roach, a junior, is likely to test the NBA waters this summer, much like Andrew Jones did last summer. As for Coleman, “He’s the rock,” Smart said.

Needing a big offseason: Dylan Osetkowski, Jericho Sims, Jase Febres. Osetkowski’s conditioning was a problem late in the season. Sims needs to keep working on his offensive game. Young and Febres simply need to get more consistent with their shot. Jacob Young announced on Thursday he was transferring.

Unknown quantities: James Banks III, Royce Hamm. Banks has reached the end of his sophomore season and still isn’t contributing. Smart wouldn’t use Hamm down the stretch even when the Horns were down to a seven-man rotation.

Up in the air: Eric Davis Jr. UT compliance officials have made no final decision on Davis’ fate. He was alleged to have taken $1,500 from a sports agent. His family has not responded to interview requests from the Statesman.

What about Andrew Jones?: Jones’ long-term health prognosis comes before anything basketball related. At the moment, he is not enrolled at UT. There are far too many unknowns as to whether he will ever play for the Longhorns again.

Who is Eli?: Transfer guard Elijah Mitrou-Long (Mount St. Mary’s) sat out this season due to NCAA transfer rules. He’ll be eligible next season, giving the backcourt more depth.