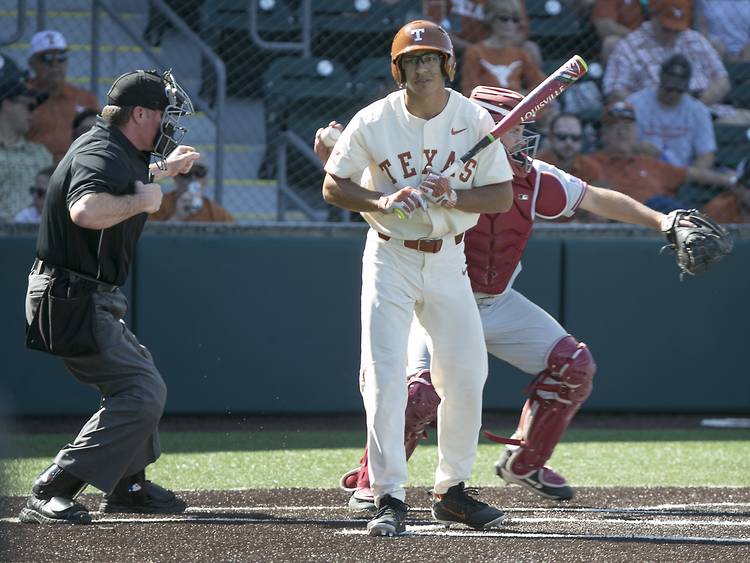 On Friday night, Texas was caught looking at its first loss in conference play.

UT’s hopes of a 4-0 start against Big 12 competition fell apart in the seventh inning of a 6-1 loss to Oklahoma State at UFCU Disch-Falk Field. In its four-hit effort, Texas struck out nine times with six of those strikeouts coming on called pitches.

“I just felt like mentally, we were really sloppy,” said Texas coach David Pierce, whose team narrowly avoided its first shutout since the 2016 season. “They played the game the right way today. They pitched well and we didn’t. They won and we didn’t.”

Meeting Texas for the first time since it recorded a 6-5 win in last year’s Big 12 championship game, Oklahoma State (11-8-1; 1-0) never trailed. The Cowboys scored in the second inning, and the first homer of freshman Jake Taylor’s collegiate career gave Oklahoma State a 2-0 lead in the fifth frame.

Texas starter Blair Henley gave up seven hits over the first six innings. But with his pitch count under 100, the one-time Big 12 pitcher of the week was sent back out to the mound in the seventh inning.

Oklahoma State led off its at-bat with a triple that eluded the glove of a diving Duke Ellis in center field. After Trevor Boone scored on an errant pickoff thrown, Ryan Cash singled and scored on Matt Kroon’s double.

“I think he truly lost some focus because they popped him,” Pierce said of Henley, who struck out seven. “He’s just got to step back, regain his composure and continue to attack because his stuff was still good.”

The Longhorns were unable to figure out Oklahoma State starter Joe Lienhard, who had posted a 5.50 ERA over seven games. Lienhard had started only twice in 2018, and neither of those outings lasted longer than five innings. Friday’s 128-pitch appearance carried him into the ninth inning.

Lienhard allowed more walks (five) than hits (three). The right-handed junior’s only run was surrendered when Zach Zubia led off the ninth inning with a home run. Texas was caught looking at six of his eight strikeouts.

Rounding the bases: Carson Teel, who was Oklahoma State’s scheduled starter for Saturday, got the final two outs on Friday. Teel struck out Masen Hibbeler with the bases loaded to end the game. … Kody Clemens extended his on-base streak to 24 games with a seventh-inning double. …  Freshman Kamron Fields and junior Chris Fearon threw three innings of shutout relief for Texas. … Former UT linebacker Malik Jefferson will throw out the first pitch ahead of Saturday’s game. Jefferson is projected by some as a second-round draft pick in the upcoming NFL Draft.