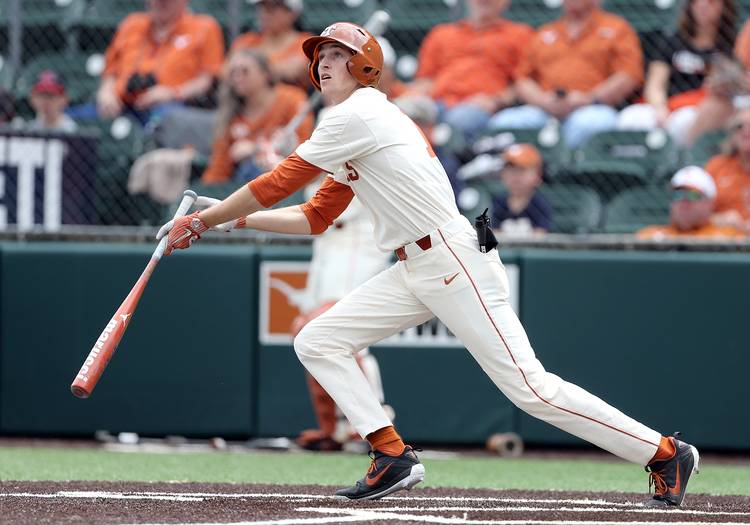 Thanks to the Duke and king on its roster, Texas moved back into the win column.

Duke Ellis drove in two runs and Nolan Kingham shut down another Big 12 offense in UT’s 7-1 win over Oklahoma State. Texas (14-10) improved to 4-1 against Big 12 opponents with its successful Saturday at UFCU Disch-Falk Field.

The victory came one day after the Longhorns dropped a 6-1 game against the Cowboys.

“We went into the locker room, and everybody was like, ‘Hey, we’re acting like our dog got shot,’ ” Ellis said. “We just needed to get over it and play on because there’s another day.”

Ellis, a sophomore center fielder, drove in runs in the third and fifth innings. The son of Robert Ellis, the former major league pitcher, Ellis spent the 2017 season at Panola College. He then signed with Texas instead of the San Diego Padres, who selected him in the 20th round of last year’s draft.

Ellis initially struggled in Austin, hitting just .200 over UT’s eight games in February. However, he is 12-for-40 in March. He has drawn 17 of his 18 walks and recorded 10 of his 12 RBIs this month. He has also been moved from ninth to second in Texas’ batting order.

“I just stay within myself,” Ellis said. “Honestly, I didn’t change much. I shortened up and started hitting balls a lot harder, and they started falling.”

Ellis’ RBI singles sandwiched UT freshman Zach Zubia’s run on a fourth-inning wild pitch. Junior catcher DJ Petrinsky then contributed a two-run double during a sixth inning that saw UT score three times. Petrinsky had been mired in a 1-for-25 slump with runners in scoring position.

“I really considered hitting for him right then,” said Texas coach David Pierce, who told Petrinsky to relax after a fourth-inning strikeout. “Boy, he was ready for it. Really, really happy for him because he’s been beating himself up.”

Over the past nine days, Kingham has picked up two wins and a save. He pitched a complete game against Kansas on March 16 and closed out Tuesday’s 3-2 takedown of No. 25 Sam Houston State.

First pitch for Malik Jefferson (@malikjefferson): 80-grade physicality; some deception and depth; most importantly, all the way to the catcher in the air. HookEm pic.twitter.com/8cNCOoDimm

Rounding the bases: Ahead of Wednesday’s pro timing day, former UT linebacker Malik Jefferson threw out the ceremonial first pitch Saturday. Jefferson also made an appearance at a football practice Thursday. … Kody Clemens went 1-for-4 to extend his on-base streak to 25 games. … Oklahoma State (11-9-1, 1-1) scored its only run on Colin Simpson’s sixth-inning single. … Texas will start Chase Shugart (1-2, 5.04 ERA) in the series finale Sunday afternoon. Oklahoma State has not yet announced its starter.