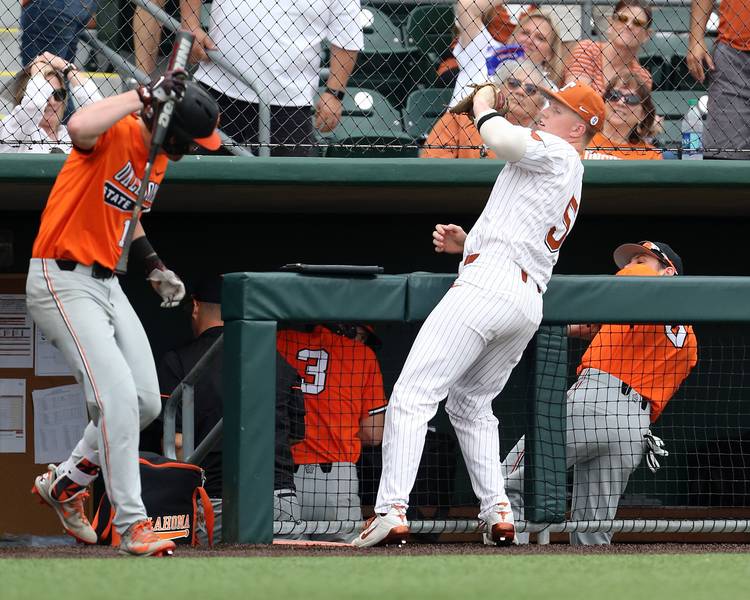 By the fourth inning Sunday, Texas had lost its head coach, starting pitcher and an ace who wasn’t even in the ballgame.

The Longhorns still exited the weekend with a big win.

“We’ve been up and down all year,” freshman Bryce Elder said. “At many times, it feels like we’re either going to win by 10 or lose by 10. Today we showed some fight, and I think that will go a long way in our season.”

Oklahoma State held a 2-1 lead after the second inning on Sunday. Then things got strange, even for the standards set by a city that prides itself on its weirdness.

The Cowboys loaded the bases with no outs in the third inning. UT starter Chase Shugart got his first out on a popup to third baseman Ryan Reynolds near the Cowboys’ dugout.

Oklahoma State coach Josh Holliday immediately argued that Reynolds had entered the dugout, an infraction that would nullify the out. The call was upheld after a conference of umpires, but Holliday prolonged the already lengthy break with another discussion.

The second debate initiated by Holliday led Texas coach David Pierce to confront umpire Casey Moser about the game’s pace. Pierce was immediately ejected. Texas pitcher Nolan Kingham, who was the winning pitcher Saturday, was then tossed from the UT dugout for what assistant coach Sean Allen described as jawing at an umpire.

“I think everybody was just trying to get the game going. That was the biggest thing,” Allen said. “It was a big point in the game.”

Texas (15-10) added five runs in the seventh inning, and Clemens hit his seventh homer of the year an inning later. UT’s 13-hit effort came one day after the Longhorns scored seven times against the Cowboys. That same Texas offense was held to one run in a loss to Oklahoma State on Friday.

“You’re not going to come out and crush the ball every game,” Hibbeler said. “We knew that, and we knew that we were going to keep playing and doing what we do. We just came out and played ball today.”

Texas removed Shugart ahead of the fourth inning. Elder was credited with his fourth win out of the bullpen after he pitched four innings of four-hit relief. Elder threw 57 pitches and said his sinker was working against the Cowboys.

Josh Sawyer and Andy McGuire closed out the game, and UT’s three relievers accounted for nine of UT’s 13 strikeouts. Those 13 strikeouts tied a season-high, set earlier in the week in a 3-2 win over No. 25 Sam Houston State.

Rounding the bases: By rule, Kingham will be suspended for Tuesday’s game at Texas State. … Clemens went 3-for-5 and extended his on-base streak to 26 games. … Ranked fourth in the Big 12 in steals ahead of Sunday’s game, Texas shortstop David Hamilton upped his season total to 12 with two successful swipes. … Oklahoma State (11-10-1) dropped to 1-2 in conference play.