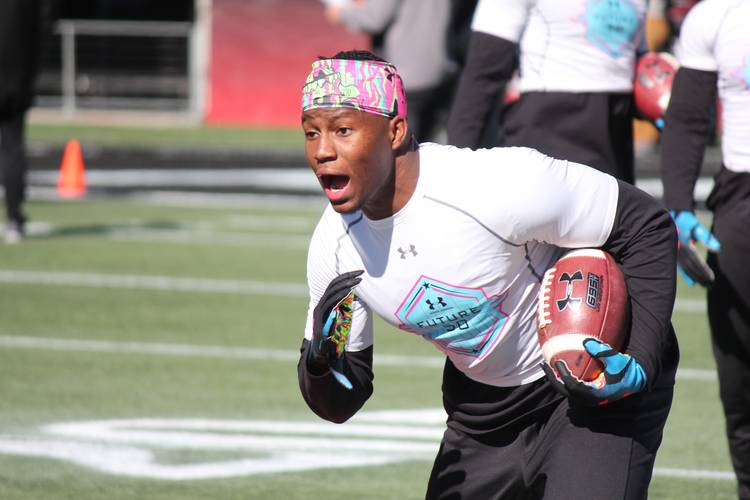 Noah Cain is used to moving. He and his mother left Baton Rouge when Cain was in elementary school, landing in Denton after a divorce. His dad stayed behind and Cain made trips back and forth during the summer.

That leaves him somewhere between a Texan and a Louisianan, and it appears Texas and LSU are two of the choices for one of the nation’s top running backs.

“I went back and forth a lot growing up between Texas and Louisiana,” he said. “I consider myself a Louisiana kid because of where I was born and the fact that most of my family is still out there. Texas is home, though, and I love the state.”

Cain became a household name as a freshman at Denton Guyer, earning District 5-6A newcomer of the year honors. He followed that up with a sophomore season that ended with a second-team all-state selection. The MaxPreps Sophomore All-American faced a decision: Move to IMG Academy in Florida or remain one of the top prep players in Texas?

Cain chose IMG Academy and he doesn’t regret the decision.

“Looking at my future, I saw an opportunity to improve as a football player because iron sharpens iron and IMG has the best players in the country,” Cain said. “I also knew it would help me in the classroom and make me understand what it is like to handle a college workload.”

Cain said the biggest adjustment was time management. He had little trouble transitioning to the football field. He’s a talent player, and he knows it. That confidence did him favors his junior season at IMG. Cain is now listed as the No. 2-ranked running back prospect in the country, per the 247Sports composite. He splits time in the backfield with Trey Sanders, the No. 1-ranked running back in the cycle.

“I felt I belonged at IMG Academy from the first practice because they invited me and gave me the opportunity for a reason, but it wasn’t easy, especially learning how to share carries,” Cain said. “You have to grow up and handle problems on your own. I think about coming home a lot, but I know what I’m doing here is making me better on and off the field.”

Cain is a 5-10.5, 209-pound wrecking ball with unique quickness and the ability to take any carry for a touchdown. He’s also an accomplished receiver out of the backfield. That combination has made him the No. 1 target for Texas at running back.

The 4-star prospect holds 28 offers and plans to narrow his list to five in the summer. Expect Texas and LSU to be two of the teams on the list. Cain is taking the recruiting process slowly and plans to wait until fall to choose a school. He’s looking for a place that feels like home, and a place with a clear route to playing time as a freshman.

“I want to be part of a 1-2 punch like I am in high school,” he said. “It would be hard to commit to a school that already had a big rotation at running back. I’ll be looking at things like the depth chart and the type of scheme a school runs before deciding. I also need to be comfortable with the coaches because they become like your dad during the hard times, and we all have hard times.”

Enter Stan Drayton. The Texas running backs coach is forming a lasting bond with Cain and the long-time assistant is one of the main reasons the Longhorns are in the mix. It also helps that neither Danny Young nor Toneil Carter took control of the running back position during the 2017 season.

“My relationship with coach Drayton is strong,” Cain said. “We met last spring and I love his honesty and approach to football. He’s always helping with my game and he’ll talk to me about more than football.”

Kerwin Roach on testing the NBA waters: ‘It’s a great way to get feedback, which is key’