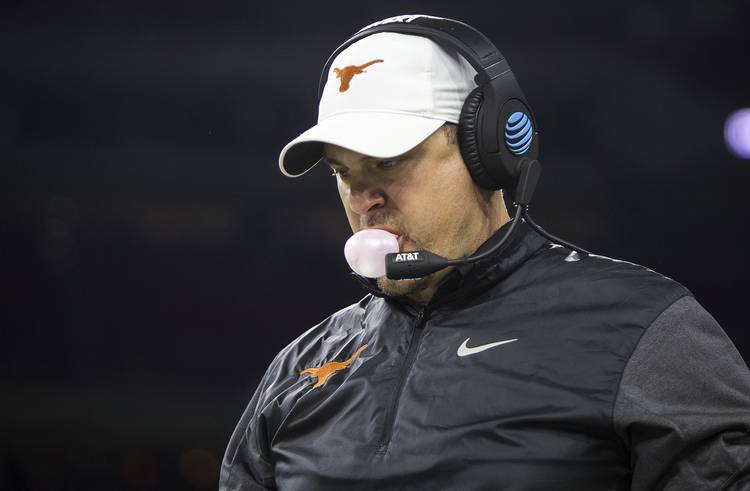 Tuesday’s workout featured a who’s-who of Longhorns among the gallery. Mack Brown and Derrick Johnson were the headliners while others like Poona Ford and DeShon Elliott were there to see their former teammates.

The product on the field? Well, it’s been better.

“Not a very good practice today,” Texas coach Tom Herman said. “We’ve got to get our guys up and motivated for each practice. We fumbled the ball way too many times today on offense.”

The ball was on the ground several times during the 20-minute period open to reporters. There was a bobbled snap by a freshman quarterback, a fumble from the experienced running back and dropped passes on both sides of the field.

Herman was especially miffed about the first- and second-team defensive units. Both allowed 70-yard touchdown drives.

“As I’ve told you guys (the media) many times, there are two demands in this program,” Herman said. “That’s effort and ball security. We’ve got to figure out a way to do a better job protecting the football. And we will. I’ve been doing this long enough. This is pretty standard for the middle of spring ball.

“It’s our job as coaches to light a fire under them a little bit and make sure we get the best out of them on Thursday.”

To be fair, the skies opened up midway through practice. Herman kept the players on the outdoor field as long as possible. Then, the Horns went inside the team’s indoor practice bubble to finish things off.

The NCAA allows for only 15 spring workouts. No school can afford to take the day off due to rain.

“I wanted to stay out and prove to our guys that we’re not soft,” Herman said. “But at the same time, you only get 12 of these in pads, and you want to make sure you get good work. It got to the point where it was too much of a hinderance.”

Johnson injured: Linebacker Gary Johnson got his cleat stuck, turned in an awkward position and suffered a strained groin, Herman said. “I don’t think it’s anything serious,” the coach said.

Still, Johnson is being groomed to be a senior defensive leader next season. He finished fourth on the team with 60 tackles last season playing in all 13 games.

Herman wants to get Johnson back as soon as possible. In the meantime, veteran Edwin Freeman and freshman Ayodele Adeoye will rotate with the first two units.

This happened on the same day UT defensive coaches started installing their “lightning” package, a third-down unit meant to get more speed onto the field.

Okafor holding on: Graduate transfer Calvin Anderson will get to compete for the left tackle job this summer. For now, Denzel Okafor must prove that he’s the right choice for offensive line coach Herb Hand.

Okafor played at right tackle last season, but as the season wore on, the coaches became nervous about the sophomore’s consistency. Asked how Okafor was doing in the last week, Herman said, “Better. Better.”

The coaches went over film from last Saturday’s workout, and Hand highlighted one specific block. “I can’t really say what he said,” Herman said. “But he said, ‘You really put yourself in a tough spot there, Denzel, because you proved to your teammates what you are capable of. Now we’re all going to expect that every play.’”

Hold onto the ball: Speaking of all those fumbles, Herman was asked about running back Toniel Carter’s fumble early during the portion open to reporters. Fumbling was Carter’s problem last season. For some coaches, it might not be a deal-breaker. With Herman, it is.

“His job is to accept coaching, and our job is to coach him,” Herman said. “What a shame it would be if a talented guy had to sit on the bench because nobody could trust him. This is not just Toniel Carter specific. Anybody. It’s our job to make ’em trustworthy.”

Briefly: Sam Ehlinger was the No. 1 quarterback ahead of Shane Buechele, based on Tuesday’s workout. Moving left to right, the starting offensive line was Okafor, Patrick Vahe, Zach Shackelford, Elijah Rodriguez and Derek Kerstetter. … Linebacker Breckyn Hager just demolished tight end Andrew Beck, who was acting as a lead blocker, on the first play of team drills. … Several Longhorns who are scheduled to participate in UT pro day on Wednesday were at practice. That included Ray Guy winner Michael Dickson, who was working with UT’s new punter Ryan Bujcevski.

Texas will be Sug Sutton’s show next season, but an imposing frontcourt could be the real star