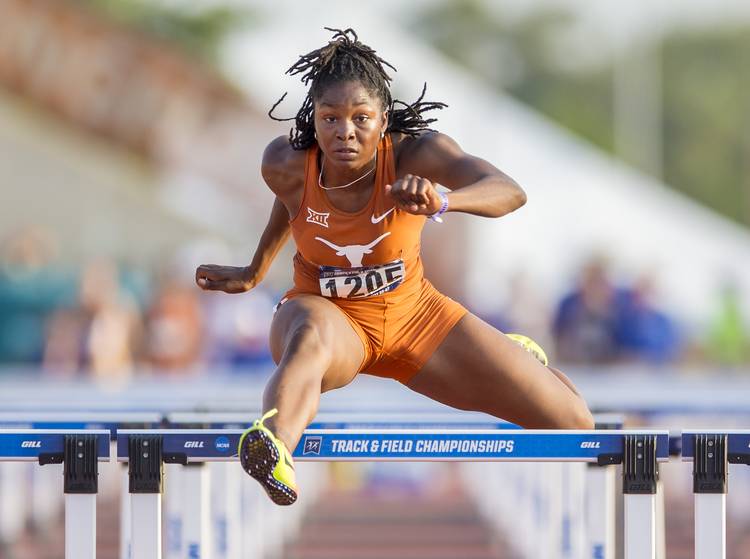 Ariel Jones of UT competes in the 100 Meter Hurdles at the NCAA Track and Field Championships West Preliminary at Mike A. Myers Stadium on May 27, 2017. JAY JANNER / AMERICAN-STATESMAN

A school bus and cards were what popped into Ariel Jones’ mind when she was asked this week about her first Texas Relays.

In 2012, the Texas senior was then a sophomore at Humble Atascocita High when she ran on two relay teams and finished sixth in the Division II 100-meter hurdles. Six years later, a 175-mile bus ride to Austin and down-time card games are the memories that stick out. Jones also remembered being star-struck by the college athletes and Olympians there in attendance and thinking, “I wanted to come back out here, not wearing my Atascocita uniform, but wearing another uniform.”

Jones, a hurdler and sprinter, has represented Texas at the past three Relays and won the  400-meter hurdles in 2016. This week, she’ll be one of 7,000 athletes at Myers Stadium.

“You know the saying: ‘Last one, best one,'” Jones said. “It’s exciting seeing the Olympians, the professionals coming out. If you have time to go see the high schoolers, they always come out and show out. It’s pretty cool to be out here on our home turf, just seeing everybody do their things.”

The Texas Relays got underway on Wednesday with the college heptathlon and decathlon. With high school, college and professional athletes descending on Austin, the bulk of the action is scheduled for Friday and Saturday.

The meet will be the first with Texas interim head coach Tonja Buford-Bailey serving as its de facto host. Before joining UT as an associate head coach in 2013, she brought teams from Illinois to the Texas Relays. She took over in February for Mario Sategna, who parted ways with the university.

For her part, Buford-Bailey doesn’t expect much to change this week.

“I’m just being me,” she said. “I usually shake hands, I usually smile a lot, I usually like to be around a lot of our alumni. Just to see the student-athletes kind of anxious and nervous because this is the one meet that their family always come to no matter what … It’s really exciting for them.”

Texas opened its outdoor season at an invitational hosted by UT-San Antonio on March 16. Only javelin throwers Fabian Dohmann, Haley Crouser and Lauryn Caldwell made the trip to San Antonio, though. That leaves the Relays as the first outdoor competition for most of the Longhorns.

“It’s a big stage to compete on for the first meet of the season,” hurdler Medric Roberson said. “I think how we come out and perform this week will set the tone for the rest of the season.”

Texas posted mixed results during the indoor season. Sophomore O’Brien Wasome won an NCAA championship in the triple jump, and the UT women won the Big 12 crown. Sam Worley (mile) and Alan Zapalac (weight throw) also set school records during the winter. The Texas men, though, were unable to defend their conference title and UT had only 12 entrants for the NCAA meet.

Seventy Longhorns have qualified for the Texas Relays. Coming off the indoor season, the meet will serve as a measuring stick.

“It’s going to be pretty big for us to see what we need to do and where we need to progress as far as the season goes,” Jones said. “I think that because this is our turf, we want to come out, we want to do our best.”

Horns at the Relays

Some notable Longhorns taking part in this year’s Texas Relays:

NFL combine snub behind him, Texas’ Poona Ford shows 32 teams what they missed in Indy