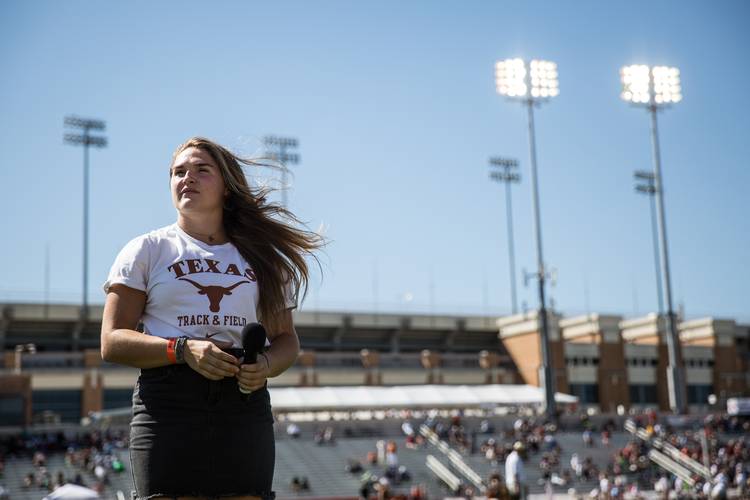 Texas freshman Elena Bruckner prepares to sing the national anthem at Texas Relays on March 31, 2017. Bruckner will compete in the discus and shot put events on Saturday. (TAMIR KALIFA AMERICAN-STATESMAN)

Elena Bruckner’s mission, if she so accepted, would provide a stern test well beyond her athletic capabilities entering Thursday’s hammer throw competition at the Texas Relays.

The hammer throw started at 11 a.m., but the Texas sophomore had a scheduled Psychology of Advertising exam at 12:30 p.m. about a half-mile away from Mike Myers Stadium that she couldn’t miss.

Bruckner was spot-on — setting a school record of 184.5 feet in her first attempt, sprinting to class, taking the exam and still making it back with time to spare for her final two throws.

“I was still catching my breath,” Bruckner said.

All in all, it was a good day for Bruckner, who not only scored a 96 on the exam but also placed seventh in her event while discovering she can be just as proficient in the hammer as she has already proven to be in the discus and shot put.

“I just grabbed my stuff and took the test,” Bruckner said. “Thankfully I had studied, so I was able to get through really quickly; I called my coach and told him I took my test, are they doing finals yet? He said, ‘No, run over (here).’

“I strapped on my backpack and raced across campus. They told me I could still throw but you have to scratch the first throw because you weren’t here, but you still have two more throws. I had fallen out of the ring (both times) so neither of them counted. I was just excited to make the finals and get back to give myself a shot.”

As a freshman, Bruckner set the school record in the discus at the Texas Relays (179-3). During the recent indoor season, she finished second in the shot put at the Big 12 championships (54-4.75).

“I thought she looked better in the meet today than she does in practice,” Sevin said. “She did some good things technically and the physical things made it go really far.”

What Bruckner learned about the hammer throw both pleased and surprised her.

“There’s a lot more that I can do,” Bruckner said. “It’s something that is new and fun to me, kind of like my side gig compared to the shot put and discus. Today gave me a glimpse that if I put a little more time and energy into the technical aspect of this event, it could be really beneficial.”