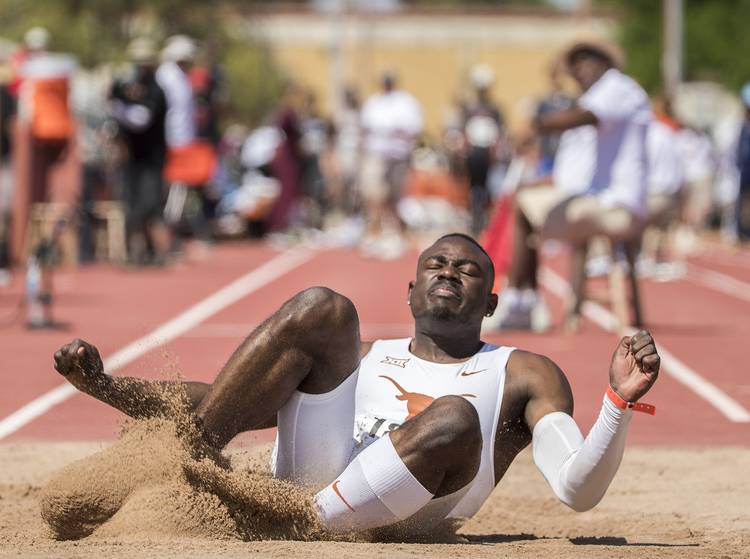 Texas sophomore O’Brien Wasome categorized his unusual Friday at the Texas Relays with the confident wisdom of someone who knows what it takes to reach the pinnacle — and how to stay there.

In his first outdoor event of the season, Wasome — the recently-crowned NCAA indoor national champion in the triple jump — fouled on his first two attempts and finished 10th, measuring 47-3 on his third try at Mike Myers Stadium. Matthew O’Neal, who competed unattached, won the event at 54-5 1/4.

It was an uncharacteristic performance for Wasome, who appeared no worse for wear three weeks after producing a school-record and career-best leap of 55-2.25 in becoming the best triple jumper in college track.

“I had good jumps,” he said Friday. “My first jump, I was just over the board. My second jump was really good, (but) I was still over the board. The third jump, I had a bad run and I just chopped up and fell out of it, basically. It wasn’t a bad day. It was a pretty good day for me,” said Wasome, who led off the Longhorns’ 400-meter relay team a few hours earlier.

“It’s not like I went out there and did a complete jump and went through all the phases and jumped bad,” Wasome continued. “The wind was a factor. (During) Warmups, it kind of picked up back and forth. I went back a lot for my approach. You have to be patient in each phase to get to the (next) phase. You can’t be patient and not attack. You have to put a lot of force in the ground.”

After studying his record-setting performance at the NCAA championships, Wasome said he realized something. Despite winning at the highest level, he still has room for improvement.

“My jump, looking at my technique, I robbed myself of a lot of distance,” he said. “It won’t take a lot to go further.”

“We all talk. I don’t think they look at me different,” Wasome said. “It’s more like, ‘OK, he beat us; we’re going to compete again. You ain’t going to do it the next time.’”

The Dotted Line: Relationships, playing time and the vibe — the trinity of modern-day recruiting