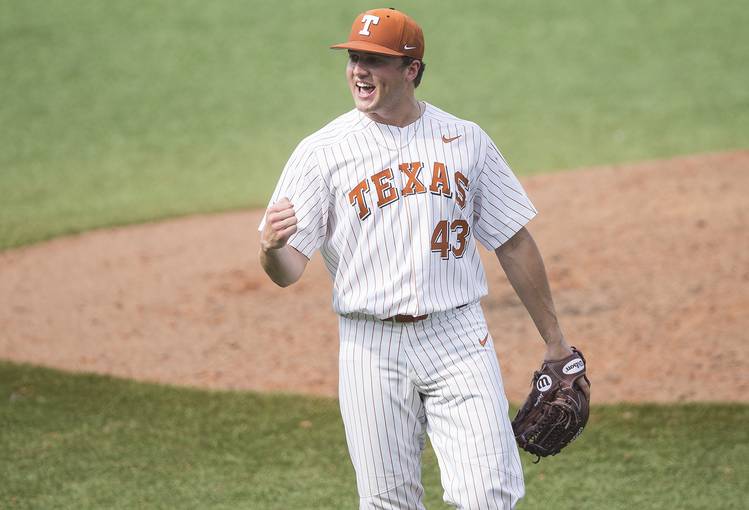 Texas pitcher Andy McGuire (43) celebrates the final out of a 5-4 win over Kansas at UFCU Disch-Falk Field on March 18, 2018. NICK WAGNER / AMERICAN-STATESMAN

After salvaging a trip to Kansas State, Texas opened its week on the right foot.

Texas built an early lead and then turned to its bullpen in a 5-4 win over McNeese State on Monday. UT improved to 18-12 with the victory at UFCU Disch-Falk Field.

Texas was coming off a series at Kansas State in which it lost twice but avoided a sweep with a 9-5 win.

“Getting (to) salvage that win at K-State was big for us,” junior Andy McGuire said. “Tonight, grinding this one out, sometimes it’s not pretty but a win’s a win and we can move forward with a little more confidence.”

Neither Texas or McNeese State scored in either of the first two innings on Monday. For Texas, though, the magic number turned out to be three.

After freshman Matthew Whelan retired the three batters he saw in the third inning’s top half, UT scored three runs on three hits. McNeese State committed three errors in the inning before Ryan Reynolds hit his third home run of the year. Reynolds’ two-run shot to left field was estimated as a 442-foot blast.

One inning later, Texas scored twice more to push its lead to 5-0.

“The bats came out hot, which is what we wanted,” Reynolds said. “Gave us a big enough lead and thankfully, it kind of held up.”

McNeese State (10-18) rallied behind a three-run fifth inning. A seventh-inning run then made it a 5-4 ballgame. A quartet of relievers, though, got the Longhorns to the finish line.

In the ninth inning, McGuire earned his third save of the season. McGuire started Monday night in right field, but the utility player is also “our most reliable in the back end right now for three outs,” according to Texas coach David Pierce. McGuire said he got ready to pitch by ducking into the UT bullpen beyond right field for a few warm-up throws in the game’s later innings.

The right-handed McGuire allowed one hit but needed only 13 pitches to close out the Cowboys. UT’s four relievers allowed two hits over five innings.

“I think if everything’s working right, it’s really scary for opponents,” McGuire said of his bullpen. “We’ve got great stuff in the pen. I think right now, we’re just kind of working through a little focus issues.”

Rounding the bases: Texas announced before the game that infielder Joe Baker had been dismissed from the team for a “failure to adhere to team rules.”… Pierce said sophomore Blair Henley will start at Texas A&M-Corpus Christi on Tuesday. Henley’s appearance at Whataburger Field will be short and he is still UT’s expected starter for this Sunday’s duel with Baylor. … David Hamilton stole his 17th base and is now tied with Kansas State’s Drew Mount for the Big 12’s lead. … In his first-ever start, Whalen allowed five hits and two earned runs over four innings. Whalen retired 10 straight Cowboys at one point.