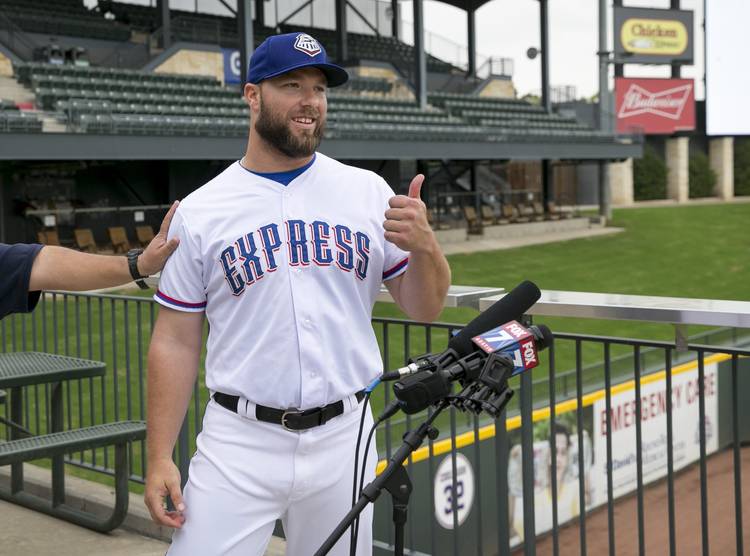 Former Longhorn Cameron Rupp does interviews during Round Rock Express Media Day at the Dell Diamond in Round Rock on Tuesday April 3, 2018. JAY JANNER / AMERICAN-STATESMAN

The newest member of the Round Rock Express will need no introduction to area baseball fans.

Cameron Rupp, a standout catcher for the Texas Longhorns from 2008-10, spent the past three seasons with the Philadelphia Phillies. When the Phils surprisingly released him, he was out of work for only a week before signing a minor-league contract with the Texas Rangers.

“So much of life is about opportunities. I had other offers, but this one was best for me and my family,” said Rupp, the 29-year-old from Dallas who was Philadelphia’s third-round draft choice in 2010.

On Tuesday, Rupp was making the rounds at Dell Diamond as part of the Express’ media day, ahead of Round Rock’s season opener Thursday night against Memphis.

“We only played a few games here in college, but it feels kind of familiar,” said Rupp, a freshman All-American at Texas in 2008 who went on to smack a team-high 11 home runs and drive in 46 runs for the 2009 Longhorns, the College World Series runners-up.

“I’m sure there will be a lot of familiar faces at the ballpark, Longhorn fans who’ve seen me play. That’s a nice thought. I’ve got to re-start my career, and this seems like a good spot to do it.”

Rupp, a graduate of Prestonwood Christian Academy in Plano, started 70 or more games for three straight seasons for the Phillies. He has a modest .234 major-league average but showed ample power, belting a combined 30 homers over the past two seasons.

The Rangers offer Rupp a clearer path to the majors than most teams might at this point. The Rangers have 33-year-old Robinson Chirinos and Juan Centeno, who has a career .232 average in 106 major-league games, filling the catcher’s spot.

“You never know how that will turn out, but it seems like if I re-establish myself here, I could get back to the big leagues with the Rangers,” Rupp said.

Rupp, a strapping 6 feet, 2 inches and 260 pounds, said he brings the ability to “hit with power and throw guys out.”

First, though, he has to become acquainted with a new pitching staff in Round Rock.

“I’ve got some homework to do,” he said. “I’ve got to prove myself every day.”

Express manager Jason Wood hasn’t had time to become acquainted with Rupp yet but noted, “I know he brings power.”

Asked about the passing last month of legendary Longhorns coach Augie Garrido, Rupp said: “That was one of the toughest messages I’ve had to deal with in a long, long time. We drew so much from him, and he was so helpful on and off the field. He taught me how to be a man.”

Texas getting awfully thin at running back, prompting Tom Herman to consider all options